The political scientists Charles Franklin and Joshua Tucker have pushed back against my finding that the Ames Straw Poll, which was won by Representative Michele Bachmann on Saturday, is a good early indicator of success in the Republican primaries. Mr. Tucker notes that only two of the six candidates to have won the straw poll have gone on to win the Republican nomination (George W. Bush and Bob Dole, who tied for first with Phil Gramm in 1995).

I have a couple of issues with this argument, versions of which are also common in the mainstream press. The most superficial point is that these statistics are meaningless in the absence of a control group. It’s true that just 33 percent of Republicans who won the straw poll went on to win the nomination. It’s also true that 9 percent of Republicans who did not win the straw poll won the nomination, a far lower success rate.

But this doesn’t get at the heart of what these political scientists, particularly Mr. Franklin, are saying. We have plenty of other information about the standing of the candidates — for instance, statewide and national polls. Mr. Franklin’s argument is that once you’ve accounted for the candidates’ standing in national polls, also accounting for the winner of the straw poll won’t help you to make better predictions about the winner of the Republican nomination:

The simple conclusion then is that there is no evidence that straw poll success increases the likelihood of winning the G.O.P. presidential nomination. Strong polling among Republicans nationally is far more powerful, even if certainly not a guarantee.

These are essentially two ways in which these hypotheses might be reconciled with each other. The first is if what happens after Iowa introduces too much noise into the problem to provide for meaningful analysis.

Here’s something to ponder, for instance. Does having a good batting average help a baseball team win the World Series?

Well, sure it does. But suppose I told you that the last five teams to lead the major leagues in batting average have not won the World Series. (Which is true; the last counter-example was the Anaheim Angels in 2002). Would it then be correct to conclude that batting average is irrelevant?

Of course not. It’s easy to demonstrate that batting average correlates with run scoring, that run scoring correlates with winning baseball games, and that winning baseball games correlates with winning the World Series. Therefore, batting average matters, Q.E.D. But each of those steps introduces a lot of noise. Maybe a team hits for a high batting average, but doesn’t have a lot of power. Maybe they have a good offense, but not a good pitching staff. Maybe they have both, and win 100 games during the regular season, but their closer gets the yips and blows a lead in Game 7. There is plenty of evidence that batting average matters — but it’s not the only thing that matters, and if you set up a study that demands to see proof of how this one little thing affects a much bigger and more complicated thing like winning the World Series, you’re liable to miss it.

Unless … winning the Iowa caucus is also irrelevant to winning the Republican nomination.

Wait, could that really be? In fact, if Mr. Franklin had applied his methodology to the actual results of the Iowa caucus instead of to the straw poll, he’d have come to exactly the same conclusion. He could have written something like this:

The simple conclusion then is that there is no evidence that success in the Iowa caucus increases the likelihood of winning the G.O.P. presidential nomination. Strong polling among Republicans nationally is far more powerful, even if certainly not a guarantee.

This is a highly interesting and controversial hypothesis — much more interesting than anything having to do with the straw poll itself — so let’s take a couple of different approaches toward it.

First, we can simply look at which candidates have won the Iowa caucus and which candidates led in national polls before the caucus, and compare their success rates in winning their party’s nomination. 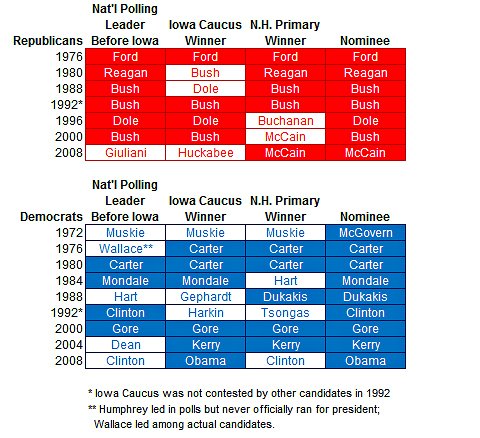 For Republicans, the national polls have been the better predictor, having called six out of the seven competitive nominations in the modern primary era correctly. By comparison, the Iowa caucus winner has taken four out of the seven nominations. The only time the leader in the national polls before the Iowa caucus failed to win the nomination was in 2007, when Rudy Giuliani flopped. But the caucus, won by Mike Huckabee that year, also got the nomination wrong.

For Democrats, by contrast, there have been four occasions (1976, 1992, 2004 and 2008) in which the winner of the Iowa caucus differed from the leader in the national polls before the caucus. In three of those four cases, the Iowa caucus winner — not the leader in the national polls — went on to win the nomination, the exception being 1992, when the other Democratic candidates essentially conceded Iowa to a native son, Senator Tom Harkin.

So our first cut is that the Iowa caucus is extremely important for Democrats, but not very important — maybe even unimportant — for Republicans.

A better way to study this is to set up a research design like Mr. Franklin’s. In fact, we’ll look at several different variations on it.

There are different ways to measure success in the primaries. One is to simply ask which candidate became the nominee. There’s nothing wrong with that — this is the point of the primary campaign, after all. But this throws away a lot of potentially valuable information: Hillary Rodham Clinton came quite close to winning the Democratic nomination in 2008, for example, while Mike Gravel did not. Particularly given the small sample sizes, our analysis may be more robust if we’re able to assign “partial credit” in these cases.

So in addition to looking at the winners and losers, we’ll also look at two alternative measures of primary success: the share of the national popular vote each candidate received, and the number of state nominating contests they won. Likewise, in addition to looking at who won Iowa, we can also look at the share of the vote that each candidate received in the state.

This gives us a total of six different model specifications: two combinations of inputs (an all-or-nothing variable indicating whether the candidate won Iowa or a continuous variable indicating how much of the vote they got) multiplied by three different ways to measure primary success. In each model, we’ll also include the candidate’s standing in the average of national polls conducted in the month prior to Iowa. Thus, the question that we’re asking is the same as Mr. Franklin’s: does performing well in Iowa matter above and beyond what the national polls tell us about the race? 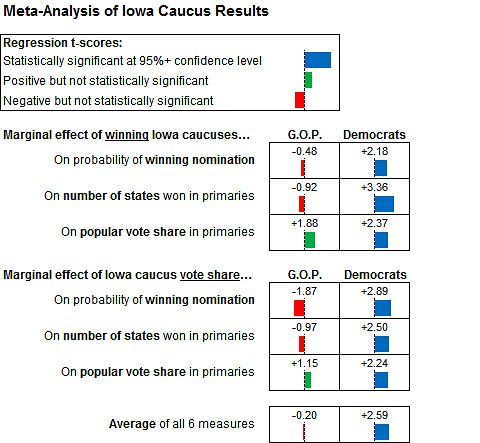 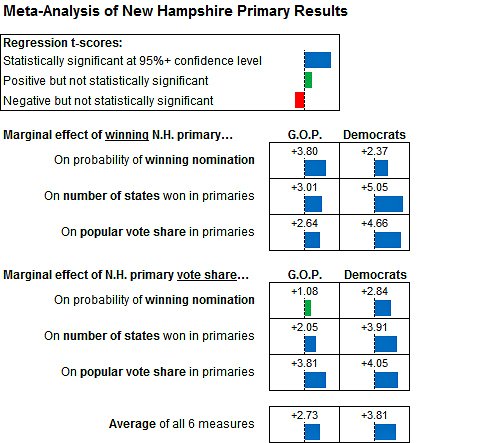 So is Iowa just a sideshow for Republicans? Does the real action not start until New Hampshire?

Certainly, journalists should keep in mind that the classic examples where a candidate used Iowa as a springboard to win the nomination all come from the Democratic side of the ledger: Jimmy Carter in 1976, John Kerry in 2004, and Barack Obama in 2008. And they should know that if Ms. Bachmann wins the Iowa caucus next year, it would hardly be unprecedented if that proved to be the high point of her campaign.

But I think it’s sophomoric to conclude, as a narrow reading of this evidence might, that Iowa does not matter at all for Republicans. First, that the effects of Iowa are so strongly statistically significant for Democrats may be of some meaning. Yes, the parties are quite different from each other, but the sum of the structural factors that give Iowa its meaning (for instance, that performing well there leads to favorable news media coverage) are common to both parties.

Second, if you exclude the case of the 1992 campaign (in which the elder George Bush won the Iowa caucus uncontested), a Republican’s share of the vote in Iowa is a statistically significant predictor of their vote in New Hampshire, even if national polls are also accounted for. And, as we’ve found, New Hampshire does matter for Republicans.

Third and relatedly, there is some evidence of a bounce in national polls for Republican candidates after winning Iowa. Unfortunately, we only have four years’ worth of data to look at for this (1976, 1980, 2000, 2008) because I can’t find any national polls conducted between Iowa and New Hampshire in the other years. But in those cases, the Republican candidates that won Iowa saw their standing in national polls improve by an average of 8 percentage points. Although there is a lot of variance from year to year — the elder Bush and John Kerry got huge Iowa bounces, for instance, while other candidates got almost none — the 8-point bounce for Republicans is similar to the 7-point average bounce that Democratic winners of Iowa have achieved on average.

But there is one important factor that makes Iowa a problem state for Republican candidates — and perhaps does greatly reduce its importance. The state’s caucus electorate is extraordinarily conservative, an outlier even by the standards of a conservative party. Just 12 percent of Republican caucusgoers in 2008 identified themselves as moderate or liberal, by far the lowest percentage of any state in which exit polling was conducted. By contrast, 45 percent of Republican voters in New Hampshire identified as moderate or liberal, one of the highest shares. 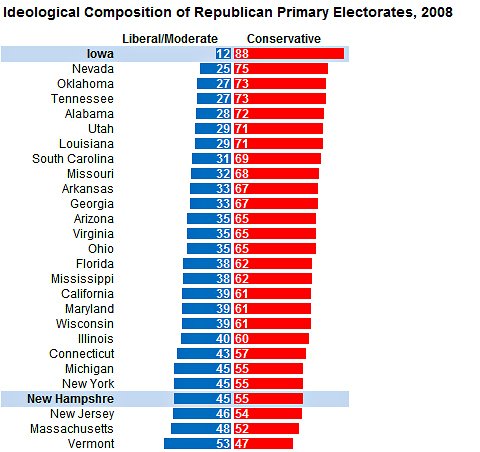 So ordinarily, it’s going to be very difficult for the same Republican to win both Iowa and New Hampshire. In fact, this has only happened twice in the modern primary era: in 1976 and in 1992, when a Republican incumbent president was receiving a primary challenge and carried both states. But every time that the nomination has been open, there have been different winners. Often it hasn’t been close: the Iowa winner was well behind in the running for New Hampshire and vice versa.

That doesn’t mean that there isn’t a bounce from Iowa — but it may not be enough to put the candidate over the top. Perhaps if Ms. Bachmann wins Iowa, she’ll finish in third place with 17 percent of the vote in New Hampshire, whereas if she loses Iowa, she’ll finish in fourth place with 10 percent. Neither of those results are likely to help her sustain her momentum. She could regroup with a win in South Carolina (hardly a bad strategy: it worked for George W. Bush in 2000 and Barack Obama in 2008). But Iowa is more of a threshold test for a conservative candidate — performing there is necessary but not sufficient to win the Republican nomination — than a leading indicator of success elsewhere.

The candidate who might have had the most to gain by winning Iowa was Tim Pawlenty — both because up-and-coming candidates tend to get larger Iowa bounces than familiar names, and because Mr. Pawlenty was a more plausible winner of New Hampshire than someone like Ms. Bachmann. But Mr. Pawlenty, evidently, was not sufficiently conservative to win Iowa: in a straw poll in which the two relatively moderate G.O.P. candidates (Mitt Romney and Jon M. Huntsman Jr.) were barely participating, he could manage just 14 percent of the vote. This was the lesson of Ames.