A series of recent polls show President Obama’s approval rating at about 46 percent on average. This is somewhat lower than it was in late May, when it averaged 48 percent or 49 percent.

Has the shift been caused by the dominant news story of the last two weeks — the disclosures about the National Security Agency’s domestic surveillance programs? That’s tough to say since presidential approval ratings rarely provide unambiguous interpretations as to cause and effect. Mr. Obama received a series of mediocre approval numbers toward the very end of May, after we wrote our last story about his approval ratings, but before the N.S.A. disclosures. It’s possible that the cumulative effect of stories like the White House’s handing of the attacks on Benghazi, Libya, and the Internal Revenue Service’s targeting of conservative groups was weighing some on Mr. Obama’s numbers. It’s possible that the consumer mood about the economy, which has been on an upswing in recent months and may have helped Mr. Obama to stave off an approval-rating decline, has become slightly less chipper. And it’s possible that some or much of this is just statistical noise.

Nevertheless, I want to correct an assertion that I made a week ago. Here’s what I wrote at that time:

[B]ecause they create as many fractures across the parties as between them, the recent N.S.A. disclosures might not have all that much effect, for instance, on Mr. Obama’s approval ratings.

I’m less concerned about the outcome of my “prediction” on Mr. Obama’s approval ratings than about my reasoning behind it. My claim that if an issue divides awkwardly across the partisan spectrum, a president may be protected from a decline in his approval ratings. I think my point may have been quite wrong.

Consider, for instance, the past episodes (apart from the economy) that did the most damage to Mr. Obama’s political standing. The health care debate in late 2009 and early 2010 was one of them, as was the debt ceiling debate in the summer of 2011.

What was noteworthy about each of those cases was that Mr. Obama received plenty of disagreement from his fellow Democrats. In advance of the health care bill’s passage, Democrats in Congress argued continuously about the parameters of the legislation. And in the fight over the debt ceiling, many Democratic commentators argued that Mr. Obama had given too much away to the Republicans.

Some of the issue, obviously, is that some Democrats may come to disapprove of Mr. Obama’s performance, directly lowering his overall approval rating. As the chart below suggests, however, Mr. Obama’s approval rating among Democrats has remained very high throughout his tenure in office. It has also been quite steady. You can certainly see some downward impact among Democrats in the period coinciding with the health care and the debt ceiling debates, but during these periods, there was a larger downturn in Mr. Obama’s numbers among independents. 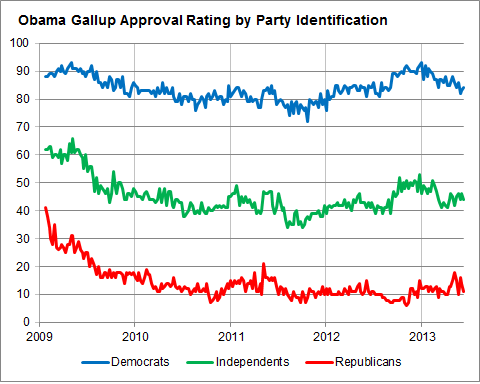 Some of this is an artifact of how approval-rating polls require a binary choice among voters, when voters may have varying degrees of approval or disapproval for a president’s performance. When a Democrat hears some unfavorable story about Mr. Obama, he or she may go from strongly approving his performance to approving it with more qualifications. When an independent hears the same news, he or she may go from qualified approval of Mr. Obama to qualified disapproval instead.

But there may also be a more subtle effect. Most voters do not have the time or the inclination to follow politics on a daily basis, especially outside of campaign periods. Instead, they may use some quick-and-dirty methods to evaluate how a president is performing.

Independents, for instance, generally follow political news less closely than Democratic or Republican partisans do. When a voter like this sees Republicans on television criticizing the president, and Democrats praising or defending him, he or she may assume that the issue reflects a garden-variety partisan squabble, and may not be swayed very much by either side’s arguments, regardless of their substance. After all, Democrats are almost always defending Mr. Obama and Republicans are almost always criticizing him, and whether the debate that particular day revolves around the economy, foreign policy or the I.R.S. scandal may not register all that much.

But when some Democratic partisans begin to criticize the president, that same voter may notice that something unusual has happened, and conclude that the president must have done something objectionable.

Couldn’t this be counterbalanced if Republican partisans were praising Mr. Obama at the same time that Democrats were criticizing him? In theory this could occur, but that’s not really what we’ve seen in the N.S.A. debate, even though most Republicans in Congress voted for the programs. Instead, Republican leaders have taken ambiguous stances on the issue in the news media, avoiding the controversy or defending the policies, if not Mr. Obama’s role in executing them.

So what our low-information voter might witness is a vigorous debate among Democrats about the N.S.A.’s programs and how they reflect upon Mr. Obama, while Republicans are largely staying quiet on the issue. This may reflect more negatively on Mr. Obama than if the representatives of the two parties were arguing with one another as usual.

It would be hard to prove that this is exactly what is happening with Mr. Obama’s approval ratings right now. As I mentioned, it’s not exactly clear what’s behind the recent decline in his numbers, and the decline is small enough that statistical variation could also be a factor.

But I believe I was incorrect to assert that the intraparty divides on domestic surveillance might insulate Mr. Obama from any change in his ratings. Instead, the periods that have shown the most short-term change in Mr. Obama’s numbers have been associated with either intraparty criticism (as in the case of heath care and the debt ceiling) or cross-partisan praise (when some Republicans spoke well of Mr. Obama following the killing of Osama bin Laden or his handli
ng of Hurricane Sandy). Precisely because these instances are unusual, even low-information voters may begin to take notice.