Last week, the FT had a very interesting column which stated:

There is a growing risk that deflation will be seen as the gravest threat to the US economy by the end of the year, warns Nick Beecroft, senior FX consultant at Saxo Bank.

He notes that the minutes of last month’s Federal Reserve policy meeting show the US central bank becoming increasingly concerned with the fall in inflation.

And the latest consumer price data will have reinforced these worries, he says. “As the year progresses, the output gap – exemplified by the still chronically weak labour market and very low levels of capacity utilisation – will lead inflation inexorably towards zero.”

In addition, the minutes of the most recently released Federal Reserve Minutes had the following observations about deflation:

Although rising energy prices continued to boost overall consumer price inflation, consumer prices excluding food and energy were soft, as a wide variety of goods and services exhibited persistently low inflation or outright price declines. On a 12-month change basis, core personal consumption expenditures (PCE) price inflation slowed in January 2010 compared with a year earlier, as a marked and fairly widespread deceleration in market-based core PCE prices was partly offset by an acceleration in nonmarket prices. Survey expectations for near-term inflation were unchanged over the intermeeting period; median longer-term inflation expectations edged down to near the lower end of the narrow range that prevailed over the previous few years. With regard to labor costs, the revised data on wages and salaries showed that last year’s deceleration in hourly compensation was even sharper than was evident at the January meeting.

Reflecting these developments, inflation compensation–the difference between nominal yields and TIPS yields for a given term to maturity–declined over the period, a move that was supported by the somewhat weaker-than-expected economic data and the publication of lower-than-expected readings on consumer prices.

Recent data on consumer prices and unit labor costs led the staff to revise down slightly its projection for core PCE price inflation for 2010 and 2011; as before, core inflation was projected to be quite subdued at rates below last year’s pace. Although increased oil prices had boosted overall inflation over recent months, the staff anticipated that consumer prices for energy would increase more slowly going forward, consistent with quotes on oil futures contracts. Consequently, total PCE price inflation was projected to run a little above core inflation this year and then edge down to the same rate as core inflation in 2011.

Participants saw recent inflation readings as suggesting a slightly greater deceleration in consumer prices than had been expected. In light of stable longer-term inflation expectations and the likely continuation of substantial resource slack, they generally anticipated that inflation would be subdued for some time.

Participants referred to a wide array of evidence as indicating that underlying inflation trends remained subdued. The latest readings on core inflation–which exclude the relatively volatile prices of food and energy–were generally lower than they had anticipated, and with petroleum prices having leveled out, headline inflation was likely to come down to a rate close to that of core inflation over coming months. While the ongoing decline in the implicit rental cost for owner-occupied housing was weighing on core inflation, a number of participants observed that the moderation in price changes was widespread across many categories of spending. This moderation was evident in the appreciable slowing of inflation measures such as trimmed means and medians, which exclude the most extreme price movements in each period.

In discussing the inflation outlook, participants took note of signs that inflation expectations were reasonably well anchored, and most agreed that substantial resource slack was continuing to restrain cost pressures. Measures of gains in nominal compensation had slowed, and sharp increases in productivity had pushed down producers’ unit labor costs. Anecdotal information indicated that planned wage increases were small or nonexistent and suggested that large margins of underutilized capital and labor and a highly competitive pricing environment were exerting considerable downward pressure on price adjustments. Survey readings and financial market data pointed to a modest decline in longer-term inflation expectations over recent months. While all participants anticipated that inflation would be subdued over the near term, a few noted that the risks to inflation expectations and the medium-term inflation outlook might be tilted to the upside in light of the large fiscal deficits and the extraordinarily accommodative stance of monetary policy.

So, the obvious question to ask is this: is the US economy facing an increasing possibility of deflation? To answer that question, I will look at overall CPI, along with the largest price components of CPI — housing (41.960%), transportation (16.685%), and food and beverages (14.795%). I will also look at the GDP derived personal consumption expenditures’ (PCE) price deflators (both overall and core), to see what conclusions the data leads to.

First — what is deflation? Deflation is a situation where overall prices decline. While this might seem like a great idea, it is in fact one of the most dangerous situations an economy can face. As an example, at the start of the Great Depression, consumers greatly reduced their consumption. Therefore, to get consumers to start buying again, retailers lowered the prices of goods in their stores. These two events — a drop in demand and a lowering of prices — led to two problems. First, lower demand means fewer products are sold, which lowers the supply of a variety of goods. Secondly, lower prices lower retailers’ profits. Lower supply of manufactured goods and lower profits at retailers leads to lower employment, which in turn leads to lower demand. This process becomes a self-perpetuating cycle. This process is called a deflationary spiral, and economists consider it one of the most damaging events an economy can face.

Secondly, what is core CPI and non-core CPI? Core CPI is a measure of prices without including food and energy. While this may seem counter-intuitive, there is a reason why it is an important measure. Food and energy prices are volatile and in some cases seasonal. For example, a series of spring-time thunderstorms in the mid-west could delay planting certain crops for a few weeks, leading to a spike in wheat and corn prices which would then drop when planting began. Or, a political development in the Middle East could lead to a spike in energy prices.Additionally, oil prices typically rise in the spring and summer because of the “summer driving season” — the time of the year when Americans spend more time driving longer distances on summer vacations, thereby consuming more fuel. However, in all of the previously mentioned situations, prices typically return to a statistically “normal” level. In addition, by looking at the “core” CPI, FOMC policy makers are attempting to discern if commodity price swings are bleeding into other, non-core price areas, or whether commodity prices are isolated.

Finally, a little inflation is a good thing. It indicates that either producers have the ability to raise prices, or there is enough demand to increase prices or wages are increasing, leading to increased demand and therefore higher prices — or a combination of the preceding three events. The first situation is referred to as supply push inflation, and it occurs when suppliers or producers have “pricing power” — the ability to increase prices without seriously impacting demand. The second situation is “demand pull” inflation, and it occurs when more and more people demand the same amount of goods, thereby pulling prices higher. How much inflation is actually good is debatable. However, some inflation indicates the economy is growing.

The charts that follow are from the St. Louis Federal Reserve’s FRED system. Please click on all charts to see a larger image. All charts use seasonally adjusted data.

Let’s start with a look at seasonally adjusted CPI: 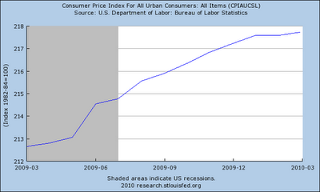 While the overall price level is increasing, the rate of month to month increase is very small. That means that overall prices are increasing at an incredibly low rate. 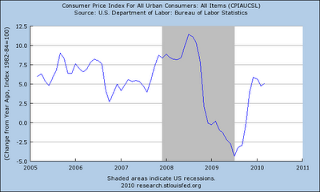 Let’s turn to the core CPI (CPI without food and energy prices) levels: 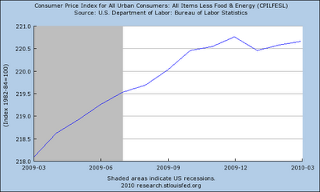 Core CPI has more or less stalled — it dropped at the beginning of this year and has since risen a bit, but the rate of increase is incredibly low. 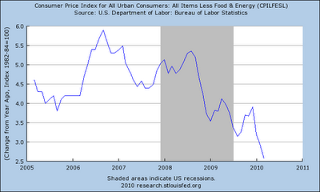 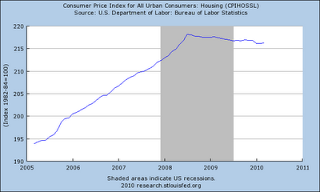 Housing related prices have stalled for nearly two years. Given the current state of the housing market, this is to be expected (see the discussion on the housing market here). But housing accounts for 41.960% of the overall CPI index, leading to a conclusion that these prices are having an incredibly negative impact on overall CPI. 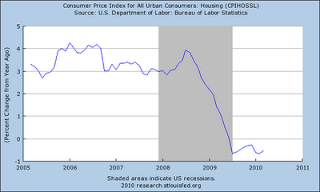 The year over year rate of change for housing prices is negative. This is obviously having a very negative impact on the overall price level. 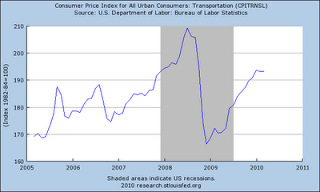 While the year over year number had a large drop at the end of 2009 that lasted through about mid-2009, the number has rebounded. 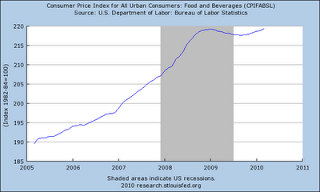 Food and beverage prices (14.795% of CPI) — like housing prices — have been pretty stagnant over the last two years. 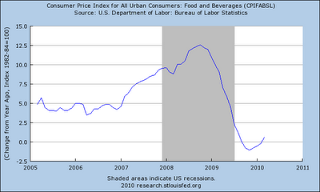 And the year over year rate of change dropped into negative territory at the end of last year, but has been moving up since. It just turned slightly positive.

Let’s now turn to the price deflator for personal consumption expenditures, which is found in the gross domestic product report. 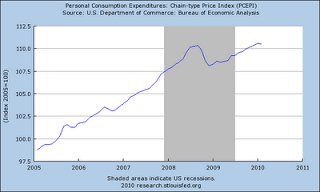 The PCE deflator has increased from it’s late 2008 lows, but has moved sideways for the last few months. 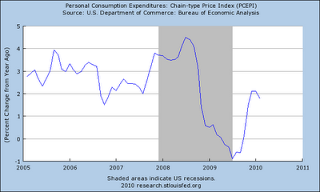 The year over year percentage change shot higher at the end of last year, but the reason for the increase is its rise from an incredibly low level in previous years. Considering that prices were declining for most of 2009, I would expect the year over year number to continue moving lower. 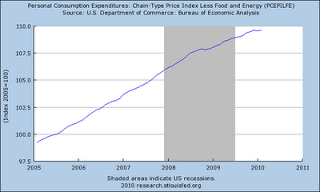 The core level has started to move sideways. 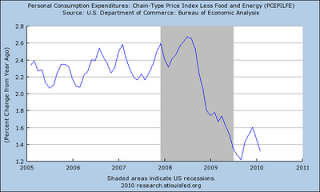 In addition, the core year over year rate of change has been moving lower since mid-2008.

The data indicates that deflation is not a problem — yet. However, there is a tremendous amount of information indicating that deflationary concerns are well-founded. Housing related prices have been under pressure for the last two years. And considering there is no evidence of a massive housing rebound, this area of the CPI index will continue to move the index lowed. After spiking in 2008, the price charts for corn, wheat and soy beans have been in a sideways pattern. The only major CPI component that might provide upward pressure is transportation prices, but some of those effects will probably be seasonal. In addition, there is little reason to think the economy will experience either demand pull or supply push inflation in the near future. High unemployment means there will be little inflationary pressure from rising wages and the low rate of capacity utilization indicates there is little possibility of supply push inflationary pressures.

Finally — and completely unrelated to this article — IBLS has published a book I wrote, titled A Practitioner’s Guide to U.S. Captive Insurance Law. It is available in their April 2010 Tax Law Review. For more information on this topic. please see this website.