The first few games of this college football season saw a return to chaos for one specific play: the punt return. Louisiana used a punt-return touchdown (after an earlier touchdown on a kickoff return) to fuel one of the biggest wins in Cajun program history and the season’s first upset of a ranked opponent.1 Texas State returned a punt 91 yards for a touchdown that forced overtime against UTSA.2 South Florida earned the distinction of shortest punt return for a touchdown ever when the Bulls fielded the ball in the end zone itself against The Citadel.

But since its exciting start to the season, the punt return has cooled to something resembling normalcy. And by normalcy, we mean boredom.

There was a time when a return felt like the most breathtaking play in football. Now it feels like a palate cleanser. Offense continues to govern the sport, with this season projected to set an all-time single-season high in expected points added per play (0.07), according to ESPN Stats & Information Group, and an all-time low in three-and-out percentage (28.8 percent). The latter is instructive: As drives are extended, punt opportunities have dried up. Just 35.8 percent of drives through Week 9 of this season had involved a punt, a rate that if maintained would represent the lowest mark of any season since at least 2004 by more than 2 percentage points. 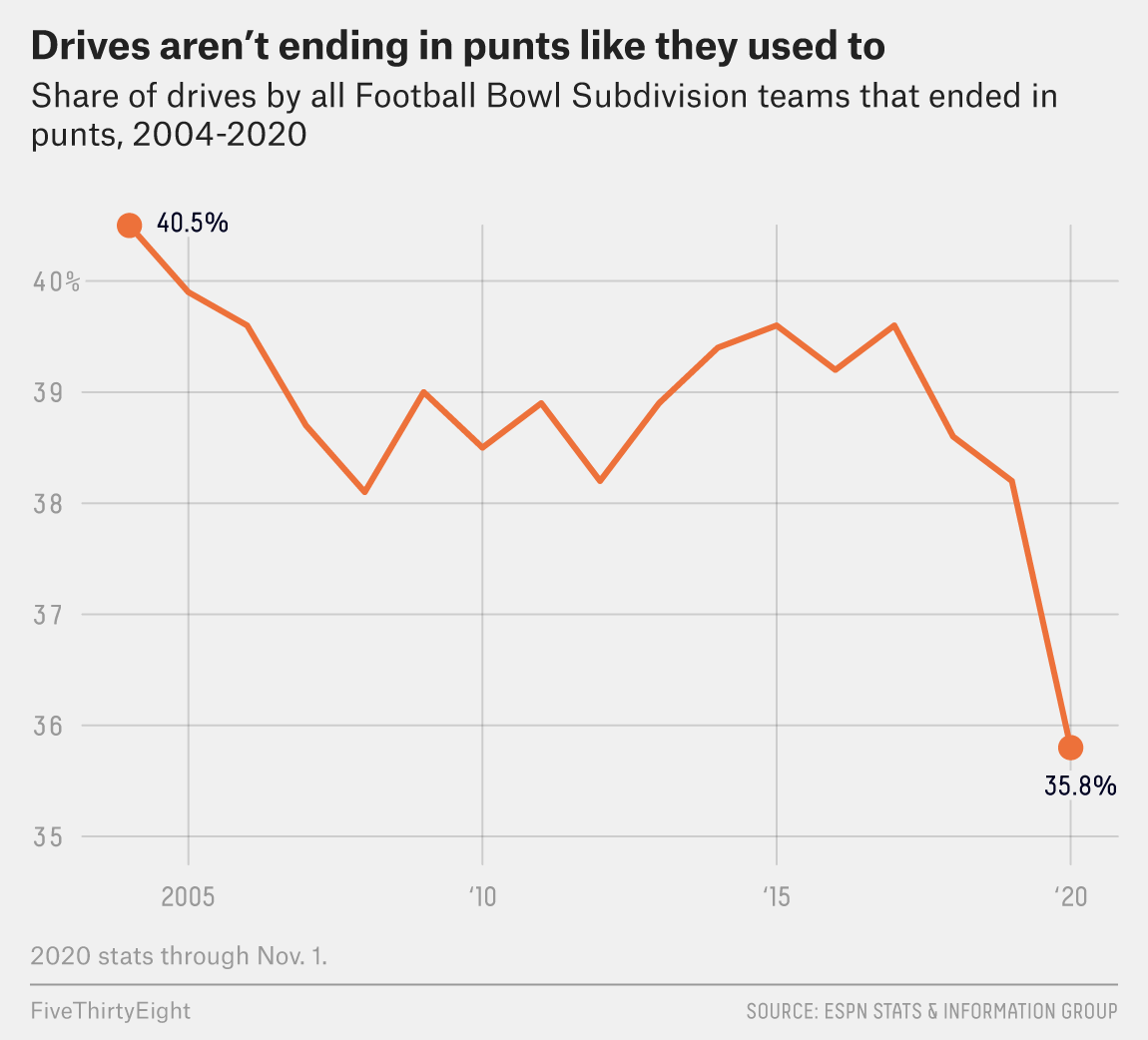 But even the appearance of a punter and a return man hardly induces anything but a yawn. Just 27.5 percent of punts through Week 9 had been returned, an all-time low. This could be the byproduct of a number of factors — rugby-style kicking, improved hang time and directional punting, among them — and a rise in skill and strategy may have led to returners either not having the opportunity or ceding it.

For fans of players waving their hands in the air, the 2020 season has been historic. More than one-third of punts have been fair-caught, an all-time high and a spike of more than 20 percentage points since 2004. 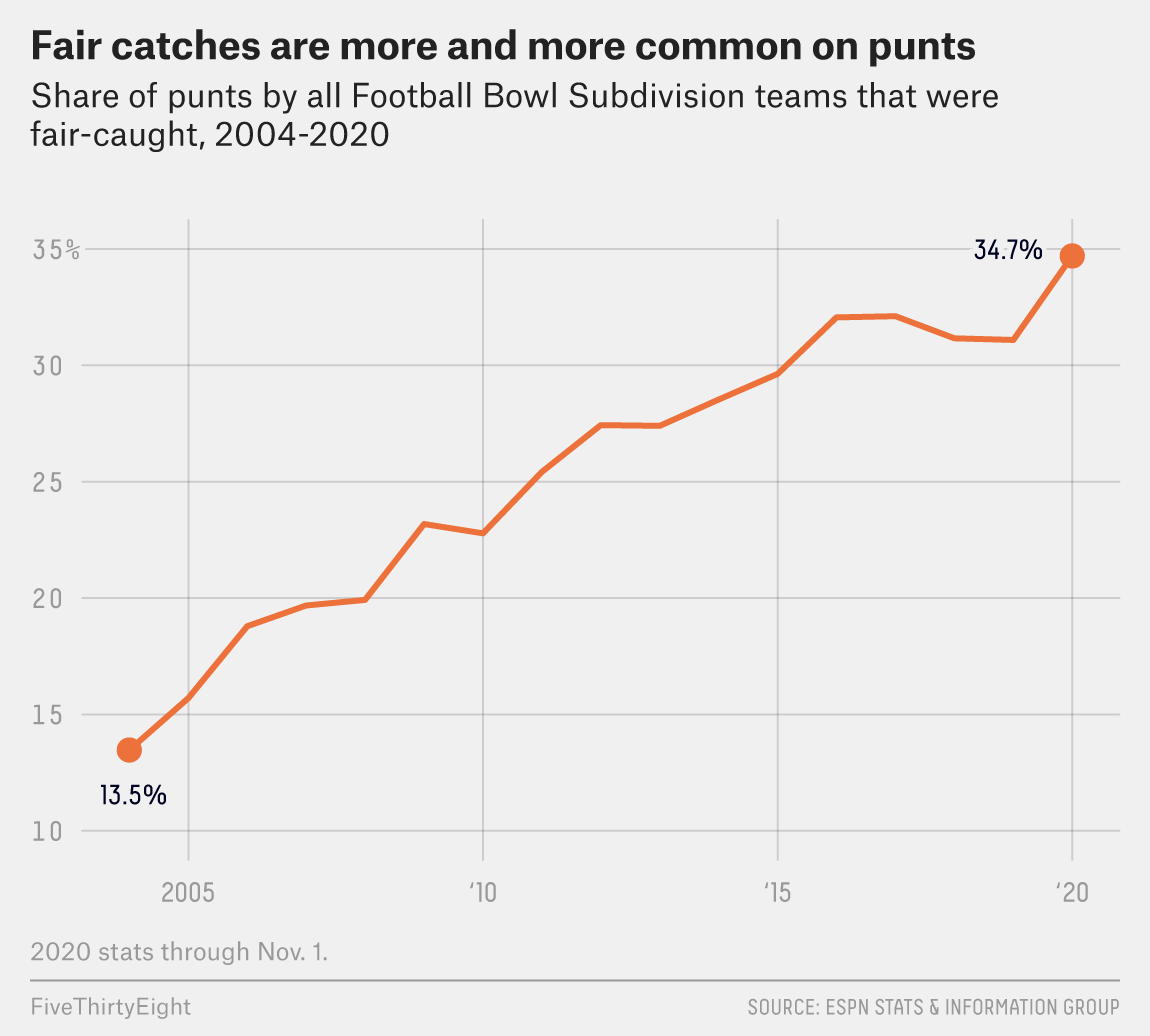 Punting is now often employed to pin opponents deep in their own territory and flip the field. And it’s working. The top two seasons since 2004 in share of punts downed inside the 10-yard line were produced in the past three seasons.3

That accuracy has come at the expense of touchdowns. There were 8,515 punts last season, and just 50 (0.59 percent) were returned for touchdowns, the lowest total and rate on record. Compared to 2004, last season represented a 57 percent decrease in total punts taken to the house. This season has included a modest bump (0.83 percent touchdown rate through Week 9), but it’s well below the 1.52 percent touchdown rate of 2004.

College football hardly resembles what it was back when a four-sport star named Jackie Robinson was setting the national standard in the return game. When Robinson led the nation in punt-return average in 1939, the average team fielded 4.42 punts per contest and accumulated 41.6 punt-return yards per game. And even in 1978, when major football programs were separated into Division I-A and I-AA,4 the top tier of teams averaged 2.51 returns per game and 18.6 total punt-return yards. Teams last season fielded 1.4 punts per game and accumulated 11.8 punt-return yards, both all-time lows, even though yards per return have stayed fairly steady since 1978. 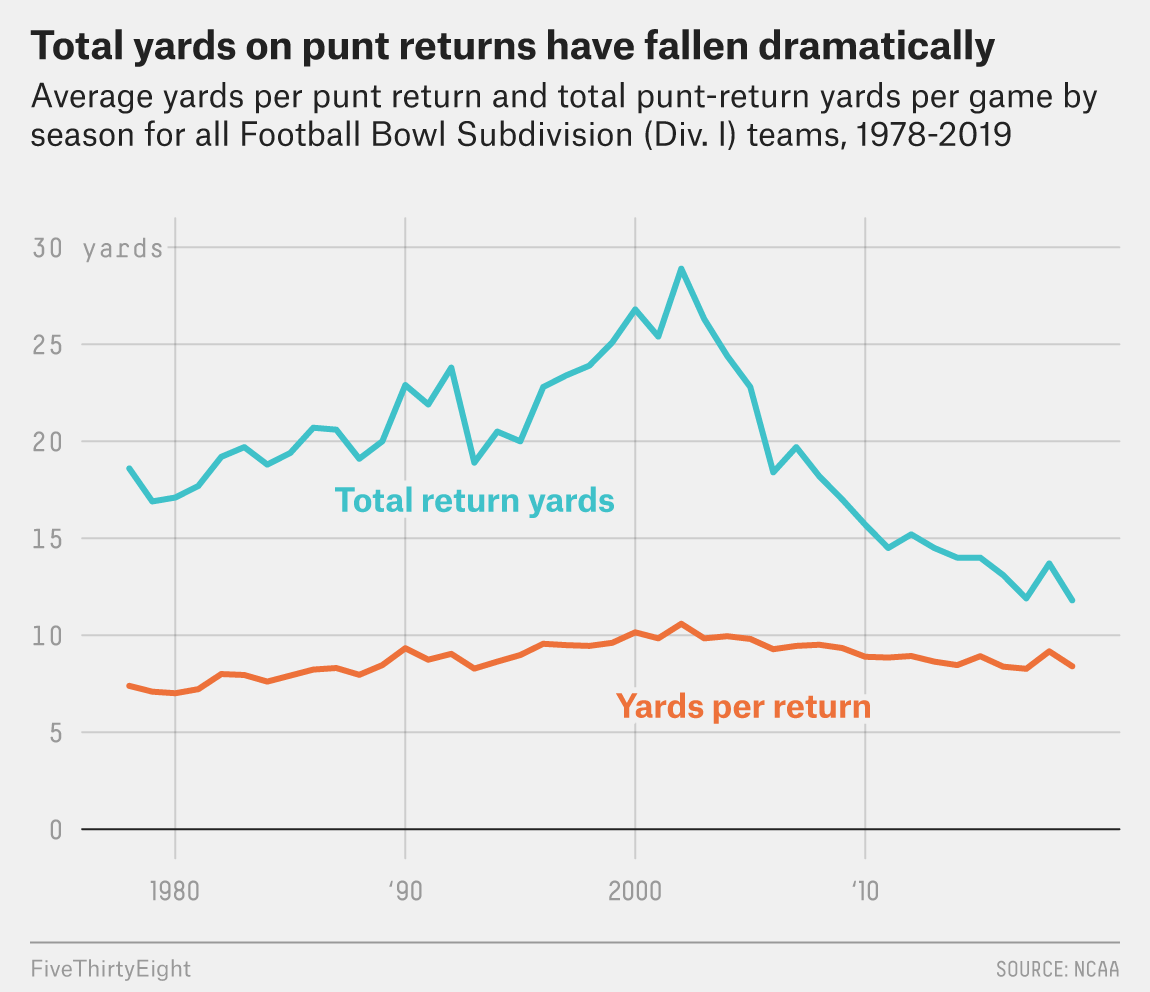 It’s hard to believe there was ever a time when a player once returned 20 punts in a single game5 and that’s likely because the single-season record for fewest punt returns per game is shared by three teams, all of which produced the mark — just 0.25 returns per game — in the past five seasons.6

Returning punts has long been an opportunity to showcase creativity — including faking a fair catch and even faking your own death. In a sport in which everything from the play calls to the uniforms feels aggressively scripted, the punt return felt organic, a grab-bag of split-second decision-making and open-field spontaneity and acceleration. But in recent years, the transitional play has evolved into a formality. And even though the first few weeks of the 2020 season reinjected excitement into a dormant fossil, it ultimately fell back to Earth, with returners waving it away below.