After the Dutch coalition government of Jan Peter Balkenende collapsed abruptly last February, a new election has been scheduled for June 9th. While it is unclear which party will take the most seats, all eyes are on far-right, anti-Islamic Party for Freedom (PVV, in Dutch) and its flamboyant, bombastic leader Geert Wilders. Wilders produced the inflammatory film Fitna, which denounces Islam as a terrorist religion. Some polls show the PVV in the lead–taking a plurality of 18% — though Wilders would probably rather remain in the opposition in parliament than attempt to form a governing coalition. (The Netherlands uses a system of proportional representation under which it is very rare for any one party to gain an absolute majority.)

The rise of Wilders has alarmed many political observers, and has been cited as yet another point of evidence of a new tide of European anti-Islamism. (Though Wilders specifically rejects comparisons to far-right politicians Jean-Marie Le Pen and Jörg Haider.) Bolstering this “trend” are Switzerland’s referendum against minarets, the French ban on headscarves in public buildings, and anti-immigration parties making headway in other countries. But is pure Islamophobia (e.g., the number of people who fear or dislike Islam) the driving factor in the PVV’s rise in support? And why are anti-Islam/anti-immigration parties such a force in the Netherlands, but not in countries like Spain? Is it simply a matter of integration of a new immigrant group, rather than cultural or political characteristics specific to Muslims?

To begin with, it seems — understandably — that the countries with the highest percentage of Muslims are where tensions have come to a head first. 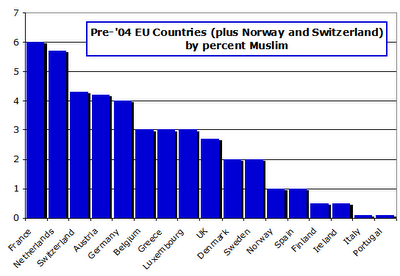 The three countries where anti-Muslim sentiment has reached a peak in recent years, France, Netherlands and Switzerland, have the highest percentage of Muslims in western Europe. Germany and the UK also have high Muslim populations, though more centralized in a few urban locations. 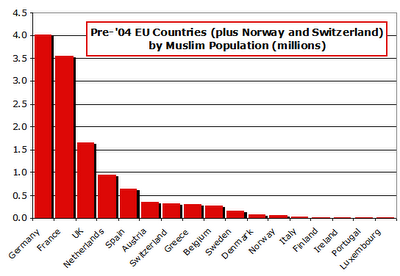 There are nearly one million Muslims living in the Netherlands, making up 5.8% of the country’s population. According to a 2005 Pew Global Attitudes Survey, non-Muslim Dutch people have decidedly mixed opinions of their Muslim neighbors: 45% view Muslims favorably while 51% view them unfavorably. 65% say they wish to remain distinct from Dutch society, and 76% are “very” or “somewhat” concerned about Islamic extremism in the Netherlands.

The past decade saw the high profile murders of filmmaker Theo van Gogh and anti-Islam politician Pim Fortuyn (though Fortuyn was not murdered by a Muslim). Fortuyn was hard to peg on the traditional left-right spectrum. Openly gay, he believed that immigration from conservative, Muslim countries was threatening other aspects of liberal, open society: gender equality, sexual freedom and free expression. Wilders has attempted to appeal to the same coalition of voters as Fortuyn, and his support makes sense given the context of high-profile assassinations.

Considering other factors, the Netherlands has done relatively well economically. Its unemployment rate was 4% in February 2010, and the anti-Islam trend predates the 2008-09 global economic crisis. Its fertility rate is 1.66, and its median age is 40.4. The Netherlands has troops in Afghanistan—a controversial policy that led to the Balkenende government’s collapse in February.

France has between 3.5 and 5 million Muslims, which would constitute 6.5-8% of the overall population. According to the Pew survey, 64% of French people see Muslims favorably, and only 34% see them unfavorably. 59% say Muslims wish to remain distinct, while 74% are “very” or “somewhat” concerned about Islamic extremism in France. 50% associate Muslims with being fanatical.

France has long had a troubled relationship with its own multicultural and multiethnic population. It was a colonial empire, and maintained the philosophy that everyone from Algiers to Cayenne was a Frenchman. At the same time, immigrants to France were expected take on a certain Gallic identity—far different from the “melting pot” or “salad bowl” metaphors. A 1905 law instituted an official policy of laïcité, a concept of un-religiosity that goes beyond simple secularism. While intended to promote social harmony by completely divorcing religion from national identity, laïcité has led to the controversial headscarf ban. In recent regional elections, Jean Marie Le Pen’s far-right National Front party won 17.8% of the vote in the regions it contested. In 2002, Le Pen finished ahead of “mainstream” Socialist candidates to go on to a runoff against Jacques Chirac. In the end, Le Pen was resoundingly defeated in the runoff, and the fact that he made it there at all was largely due to a vote-split among several center-left candidates.

February unemployment in France was 10.1%, and its fertility rate is fairly high for Europe at 1.98. The median age is 39.4. France has experienced some high-profile crime and social unrest in the past decade. Widespread riots occurred in the banlieues surrounding Paris in 2005, with then-Interior Minister Nicolas Sarkozy advocating a tough response with a metaphorical Kärcher hose.

Switzerland has 400,000 Muslims, or 5% of the country’s population. Switzerland was historically quite isolationist and less welcoming of immigrants than other European countries, but since the 1970s has had a growing population of foreigners — reaching 22% in 2009. It has a relatively low unemployment rate of 4.1%, and low fertility at 1.45.

Spain has the distinction of being the largest EU country to have once been under Muslim rule. Today, it has a Muslim population of about one million, or 1-2% of the country. 68% of Spaniards say Muslims want to remain distinct from mainstream society. 46% of Spaniards view Muslims favorably, while 37% view them unfavorably. (This means that 17% either had no opinion or were unsure—a much higher percent age than in France or the Netherlands.) A June 2004 poll, coming shortly after the March 11th terrorist attacks, showed that 80% of Spaniards believed Islam was “authoritarian,” and 57% believed it was violent.

Spain is suffering from a popped housing bubble, and has an unemployment rate of 19%. Its fertility rate of 1.31 is one of the lowest in Europe, and its median age is 41.1. It had troops in Iraq—despite widespread popular opposition—and withdrew them only after José Luis Rodríguez Zapatero’s Socialists won the 2004 elections.

Despite having seemingly ripe conditions, Spain does not have a significant anti-Islam political movement. This is due in part to the unique nature of Spain’s political paradigm, which is still greatly shaped by the Franco era. The left is very socially progressive, pushing for greater women’s, LGBT, and reproductive rights. The right, while not overtly Francoist, is still highly connected with old, Catholic military institutions. The center-right party is right enough to pick up conservative traditionalists, while its left is cutting-edge enough not to be outflanked.

At the same time, Spain’s Muslim population remains relatively small — around a million people. With other minority groups like the separatist Basques playing a higher profile culturally and politically insurgent role in society, Muslims immigrants are simply less of an issue than the previous three countries.

All told, the data are murky. The greater traction of anti-Islam parties in some countries appears to be more connected with country-specific factors— high-profile murders in the Netherlands, a situation of social unrest in France, high Muslim populations in all three—than with any Europe-wide causes.

On the other hand, countries that have moderate but quite centralized populations of Muslims, like the UK, Germany and Austria, may begin to see the issue become politicized further. Each of these three countries has had political strife over the issue, but without the most polarizing anti-Muslim polemics as in France, the Netherlands or Switzerland. This could be in part due to political systems, where Germany and Austria have strongly anti-extreme party controls, and the UK has first-past-the-post voting, which marginalizes fringe parties.

However, the growing strength of the British National Party in the UK (which is competing hard for two House of Commons constituencies) and the National Democratic Party in Germany (which survived a banning attempt in the early 2000s), and the success of the far right Freedom Party in Austria in the last decade must be accounted for. While they have so far not taken the overtly anti-Muslim route as firmly as Wilders, Le Pen or Switzerland’s UDC, they are likely the next in line to do so.

In conclusion, there is sufficient evidence to say that as Muslim populations have grown in European countries, anti-Muslim sentiment and rhetoric have increased among the right and far-right. In addition, we are likely to see them increase, especially as more Muslims settle in Europe. The length and strength of this “wave” will be largely dependent on how the current conflicts are resolved — perhaps by increased integration by Muslim immigrants and additional social rights for self-determination allowed by European countries — and whether Muslim populations continue to grow.