I don’t think you’ll find anyone claiming that the White House has had a good week. And certainly, some of the controversy surrounding the bonuses paid to employees at AIG and other bailed-out companies may have longer-term, as well as near-term, consequences for the Administration.

But so far, and in spite of numerous assertions to the contrary inside both the blogosphere and the mainstream media, there’s little evidence that the bonus controversy is hurting Barack Obama. 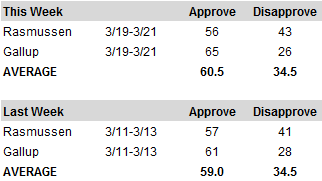 In addition, Research 2000, which does not track presidential approval but does track the related concept of presidential favorability, sees little change in Barack Obama’s standing with the public. This week, 67 percent of the public has a favorable impression of Obama and 28 an unfavorable one, not materially changed from last week, when those numbers were 68 percent and 27 percent, respectively.

This apparent steadiness in Obama’s numbers comes in spite of the fact that the public has been following the AIG story very, very closely. The Occam’s Razor answer to this dilemma may simply be that, in spite of the outrage the public feels about the bonuses, they do not particularly blame Obama for them. Instead, they blame AIG itself, and may see Obama as being as much of a victim as a co-conspirator. We should keep in mind that, among the 95 percent of the population that does not follow politics especially closely, what they’ve seen is Obama expressing some (tempered) outrage about the bonuses and saying he’ll do whatever he can to recoup them, in between stints on Leno and filling out his March Madness bracket. The notion that the Administration should be blamed for failing to build in better checks on executive compensation in its bailout and/or stimulus legislation, while persuasive to policy wonks, is perhaps a bit esoteric for the average American. The perception is that AIG broke the rules, not (as is actually closer to the mark) that the rules were inadequately written.

Several other factors may also be helping Obama. Firstly, the Republicans, who have historically been laxer on executive compensation, are in no position to claim the moral highground. Secondly, the rally in the stock market, which seems to be boosting consumer sentiments, may be providing something of a wind behind Obama’s back. And thirdly, the Administration has a keen survival instinct, and hasn’t hesitated to throw its allies, particularly Chris Dodd, under the proverbial bus.

This is not to suggest that there aren’t longer-term risks for the White House. Any further actions that are perceived as a “bailout” will now require more political capital, and may in fact be entirely impossible. This may come to a head this week, as further details emerge about Treasury’s bank rescue plan, which is so far receiving almost uniformly terrible reviews.

If you believe as I do, moreover, that some of the actions taken by the Congress are actively counterproductive to the recovery of the economy, that could obviously come back to harm Obama.

As Ron Brownstein points out, however, the unexpected ferocity of the AIG backlash could also prove to be helpful to other aspects of the Democratic agenda. Consider that about half of the Republican conference in the House just voted for a 90 percent tax rate on certain individuals; is it now going to be easier or harder for the Administration to roll back the Bush tax cuts? Other major aspects of the Obama agenda, moreover, such as health care and EFCA, can credibly be framed as common interests against corporate ones; such frames may now have greater resonance.

Then again, it may be that outrage over AIG, while intense, may be rather narrowly directed at AIG itself, and may not translate to outrage at the wealthy or at corporate America in general. My sense is that the anger at the banks does in fact reflect at least a mild paradigmatic shift in the American consciousness on these issues, but I can offer no proof of it.

One thing’s for certain: populist sentiment, whatever the Administration chooses to make of it, is no longer something it can afford to ignore.