In your discussion of the Bayh coalition today, you used the usual 60 vote marker as the line to break filibusters.

But why is that all that folks mention? I ask because everyone (media and blogs alike) are treating the filibuster as a far more commonplace occurrence than it should be. Part of the reason for this is that the GOP has learned to use the procedural filibuster (as allowed for them by Senate Rule 22 from 1975) for everything, and Reid gives in and calls for cloture.

Reid has the power as majority leader to require actual filibusters – you know, reading the phone book for 19 hours on the senate floor. It’d also make it clear to the media and the public who stopped a piece of legislation – meaning that the story line changes from “Reid unable to find 60 votes” to “McConnell reads phone book for 19 hours to stop vote.”

Why does nobody talk about that option? Why doesn’t Reid exercise that option? Everyone is so stuck on “60 votes” as if it means something, but 51 votes is all that matters to pass legislation.

B.R. raises several interesting points, but they ultimately point back to one thing: Harry Reid has been exceptionally ineffective as the Democrats’ majority leader.

The number of cloture votes skyrocketed in the 110th Congress following the Democratic takeover of the Senate and Reid’s assumption of the majority leader position. The Senate voted on 112 cloture motions in the 110th, exactly double the number (56) of cloture votes in the 109th Congress, and two-and-a-half times as many as the average number of cloture votes (44) over the previous nine Congresses. Of these cloture motions, 51 were rejected (meaning that opponents of a bill succeeded in blocking an up-or-down vote) and 61 were passed. 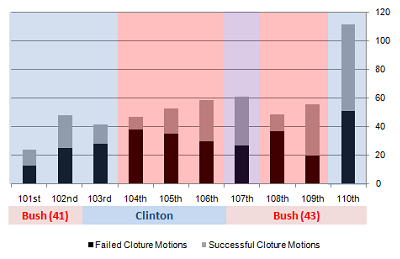 Not all of these cloture motions, it should be noted, were necessitated by obstructionist Republicans. In some cases, such as on FISA and on certain resolutions related to the Iraq War, a minority of Democrats were seeking to prevent a vote. Undoubtedly, however, a majority of these cloture motions were in fact triggered by Republican floor action, and the vast majority of them were also procedural filibusters — the actual filibuster, in which Mitch McConnell wets his pants while reading from the phone book for 19 hours, is now exceedingly rare.

There are basically two mechanisms that a majority leader can employ to limit filibusters: firstly, he can threaten to block votes on certain of the opposition party’s legislation (or alternatively, present carrots to them for allowing a vote to proceed), and secondly, he can publicly shame them. Reid managed to do neither, and the Senate Republicans did fairly well for themselves considering that they were in a minority and were burdened by a President with negative political capital.

I don’t imagine the culture of the Senate changing in the new Congress so long as it’s under Reid’s direction, and Reid is highly unlikely to be replaced. There is some chance, however, that Obama rather than Reid will dictate the tone, particularly if Joe Biden is dispatched to Capitol Hill fairly often.

It should also be noted that a senator is perfectly well allowed to vote for cloture (allowing a vote to proceed) and then vote against the underlying bill; this is not all that uncommon. The opposite also happens occasionally — on a lot of ethics-type legislation, for instance, senators know that they’ll face public scorn if they vote against a measure, so they’ll try and prevent themselves from winding up in that position by voting against cloture preventing it from coming up for an up-or-down vote.

So long as Obama’s approval ratings remain strong, it’s somewhat likely that he will exact enough public pressure on moderate Republicans like Susan Collins to force a majority vote on broadly popular issues like health care, whether or not Collins ultimately votes ‘aye’ on the underlying measure. In those cases, the 60 vote threshold may be overrated. On other issues like the Employee Free Choice Act on which Democrats have been less effective at framing the public debate, the 60-vote threshold may be more tangible.

The bottom line, however, is that the Republicans are filibustering more and more often because they can get away with it. If Reid can’t get them to pay a greater public price, then the Democrats ought to find somebody else who can.