Tomorrow morning, the final results of the parliamentary election in Iraq will be announced. As it stands now, at least 9 coalitions will earn seats, and no clear leading party. With about 95% polling stations having reported, Iraqi Prime Minister Nouri Al-Maliki’s State of Law coalition has about 25.8 percent of the national vote, while challenger Ayad Allawi’s Iraqiya list holding just barely more, with 25.9 percent nationally. 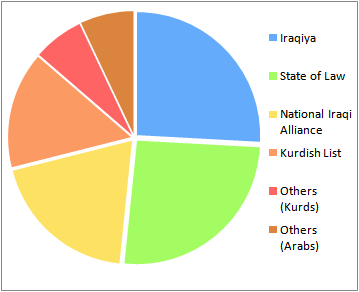 As we previewed back in January, several major fault lines in Iraqi society are made clear through the political polarization. “Moderate” Shia voters, many associated with leading cleric Ali al-Sistani have generally voted with the State of Law coalition. More radical Shia voters, mostly from the southern Baghdad slums and south eastern border provinces with Iran, have tended toward the National Iraqi Alliance, who are headlined by the populist junior cleric Moqtada al-Sadr (known better for his well-armed militia than his Islamic learning).

Ayad Allawi’s Iraqiya (Iraqi nationalism) coalition is intended as a secular party that cuts across sectarian and ethnic bounds. In effect, it is supported by Iraq’s Sunni population, and a small minority of Shias who have been disaffected by the sectarian and southern-focused State of Law or the more religious and radical National Iraqi Alliance. Finally, three Kurdish parties — led by the main Kurdish List — continue to dominate the Kurdistan region and continue to grow in influence over Kirkuk. 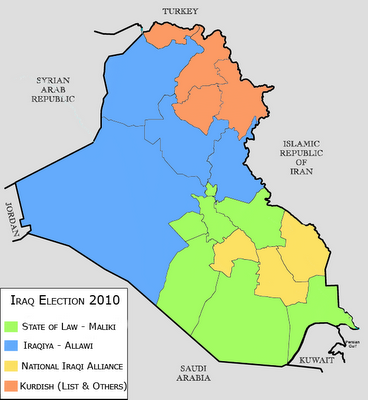 While the system as a whole is based on proportional representation, most seats are distributed proportionally at the provincial level. In 2005, distortions caused by this system were mitigated through a set of 45 compensatory seats that were allocated at the national level to parties whose seat totals at the provincial level underperformed their national vote share.

The passage last December of a new electoral law, however, resulted in the reduction of the party-based compensatory seats from 45 to 7, with an additional 8 seats reserved for national minorities. As a consequence, the potential for distortion is somewhat higher, especially in favor of parties that outperform at the individual provincial level, something that harms the near-even split the Iraqi National Alliance and State of Law have achieved in the south compared Iraqiya’s domination in the north. 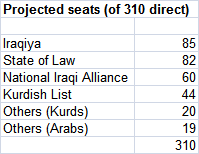 With results this close, it is likely that the negotiations for the new government will be quite extensive. Reports of multiple high level meetings between various party and coalition leaders have been made, with only a few parties completely incompatible in terms of building a governing coalition. The Sadr faction of the National Iraqi Alliance has ruled out working with an Allawi government, but State of Law, the Kurds and Iraqiya are in close negotiations.

In the near term, these negotiations may be hampered by the accusations of fraud that have flown in all directions. Early on, members of Allawi’s coalition accused the electoral commission and local officials in Baghdad of engaging in fraud to help Maliki’s State of Law Coalition. Similar accusations were made by the Iraqi National Alliance and State of Law at one another in the south. In turn, now that Allawi’s returns have improved, State of Law has accused him of fraud and demanded a national recount.

As a result, the electoral and governing situation remains in flux, particularly as the United States endeavors to play an increasingly low profile role in the country. The Obama administration and military officials are looking for a resolved and stable government to emerge from this election, securing the way forward for a phased withdrawal through 2011.

On the other hand, further accusations of fraud, a failure to build a governing coalition or the unhinging of various extreme elements of the Sunni Arab and Shia communities could together prompt much of the progress of the last several years come undone. As such, much rides on this election, based on peaceful negotiation and principled transfer of power.
—
Renard Sexton is FiveThirtyEight’s international affairs and is based in Geneva, Switzerland. He can be contacted at sexton538@gmail.com