3:31 AM: A map showing the ostensible results.

2:19 AM: The reader who sent these to me is named Daniel Berman; I’ve confirmed that he’s comfortable with having his name disclosed. Daniel is pursing a masters in Iranian Studies at the University of St. Andrews and these results were sent to he and the other students in his program. There’s nothing particularly proprietary about them, other than that a lot of hard work was done (by Daniel and his classmates, not by me) to translate them into English.

2:01 AM: Updated with additional analysis — see below.

12:25 AM: A reader, who identified himself only by his first name, sent these to me. I can’t vouch for their accuracy beyond that, but they seem pretty kosher. I don’t think this data is exactly supposed to be top-secret or anything like that, but I know it’s hard to find, and so I’m posting it as a public service. These are supposed to be “official” results as tallied by Iran’s Interior Ministry. If you want to compare and contrast, you can find some information on Iran’s 2005 election results here.

(Note: per several requests, the results are now listed in alphabetical order).

Now, here is a comparison between the percentage of the vote that Ahmadinjad received on Friday with the percentage received by the conservative candidates (Ahmadinejad, Larijani and Qalifab) in the first round of the 2005 elections. 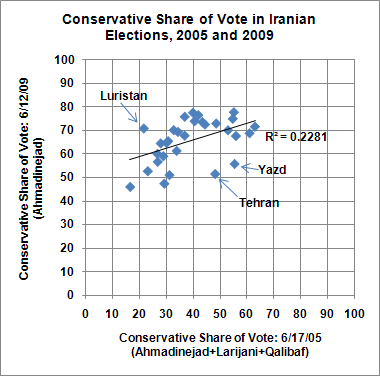 The one province that my little birdie alerted me to is Luristan (or Lorestan; these Arabic Farsi transliterations are imprecise), where conservative candidates received only about 20 percent of the vote in 2005 but where Ahmadinejad supposedly got 71 percent on Friday. Another outlier is Tehran Province, where Ahmadinejad and the other conservatives actually didn’t do all that badly in 2005 but did relatively poorly on Friday (the Interior Ministry still had Ahmadinejad winning Tehran Province, however, although not the city of Tehran itself).

Here is the same graph looking at the Ahmadinejad share of the vote only. 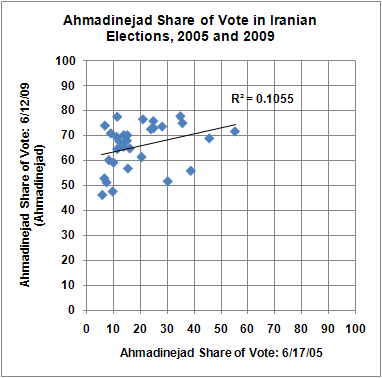 These correlations are fairly weak, especially for the latter graph. Certainly not the kind of thing that will dissuade anyone who believes the election was tainted.

But, there are some important differences between the two races; in the first round in 2005, you had five candidates who were fairly competitive — two conservatives, two reformists, and one (Rafsanjani) who is probably best considered a centrist (by Iranian standards). This time, you had only two candidates who received a competitive number of votes. And, obviously, Iran is a complicated and ever-changing place, with votes that may shift along ethnic fault lines in addition to political ones.

I simply don’t know anything more than I’ve reported here and in Saturday’s post. Based on conversations with people who are a bit more informed about Iranian domestic politics, it seems absolutely possible that Ahmadinejad in fact won (although his share of the vote was probably boosted through “dirty tricks” — intimidation both before and during the election, jamming text messaging services, etc.) and also absolutely possible that the election was stolen. The statistical evidence is intriguing but, ultimately, inconclusive.