A most strange storyline has emerged with regard to the provincial vote totals for the Iranian election. Around 1600 GMT Sunday, the ministry of Interior released the official vote totals by province. As others have mentioned, by law candidates have three days following voting to contest the result, before the final totals are approved by the Supreme Leader. As such, it is notable that both the aggregate totals and provincial totals were certified, approved and released before the three day deadline.

Another curious turn of events was that somewhere between 1600 and 2000 GMT, the provincial vote totals mysteriously disappeared from the English language (and all other languages other than Persian) versions of www.presstv.ir and other Iranian news outlets, where the interior ministry had distributed the results. As such, we are in debt to Daniel Berman and his colleagues for their translation of the official provincial numbers.

Although widespread allegations of fraud, manipulation, intimidation and other all too common elections tactics have been be common, statistically detecting fraud or manipulation is a challenge. For example, while mathematicians have been evaluating vote returns for irregularities in normal situational random number distribution , determining what the “correct” results should be is very difficult.

However, given the absolutely bizarre figures that have been given for several provinces, given qualitative knowledge – for example, that Mahdi Karroubi earned almost negligible vote totals in his native Lorestan and neighboring Khuzestan, which he won in 2005 with 55.5% and 36.7% respectively – there is room for a much closer look.

Two things are of particular interest to us, the first being whether it is plausible for Pres. Ahmadinejad to have received as high of a total as the results indicate (and the sub-question of whether it was plausible for him to have received an outright majority in the first round). The second question is whether the vote totals for his rivals are reasonable, given the fact that they have run for elected office before. Iranian politics, as in many countries, is dominated by a relatively small number of individuals who in many cases have held several of the key posts in government since 1979. Those with strong connections to founding Supreme Leader Khomeni and his associates have fared particularly well. Evaluting their support by province in previous election cycles, particularly in a Presidential race, is one way to provide some evidence for or against them.

First, we will have a look at the trend-related numbers for Iran’s recent Presidential history to see if Friday’s totals make intuitive sense, given the overall trend towards higher turnout, and decreasing first round victor percentages. 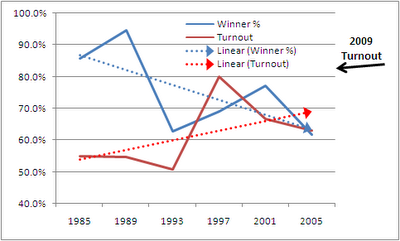 As discussed last week, higher turnouts and lower winning percentages have been the trend. With reported turnout through the roof (between 80 and 85 %), the 2009 elections were expected to be quite competitive.

This second chart integrates the first round data from 2005, which resulted in the first-ever run-off vote in the Islamic republic. A regression using just first round data projects that in 2009, the first round winner would pick up just 31.5% of the vote, quite a low figure – but with two nationally competitive candidates, and two regionally competitive candidates, certainly not impossible. Using just the overall victor’s winning percentage, a 2009 projected figure of 58.7% comes out – higher than any polling would have suggested, but certainly within a range of normal. We would have expected Ahmadinejad’s result from Friday, informed by the polling, historical trends and a bit of bet-hedging, to be between 40% and 55%. 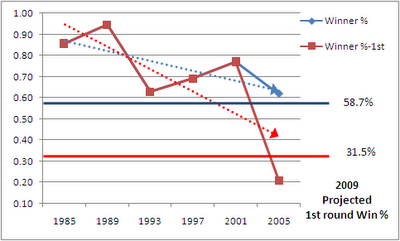 These figures would suggest that Ahmadinejad’s reported 65% of the national vote is at minimum outside of the trend, and more likely, an exaggerated figure. Whether they overstate the will of the Iranian public by 3-5 points or say, 20-30 points, is up for interpretation.

Second, with regard to the challengers, the focus on Mousavi’s vote totals has dominated most of the discussion, for example, his unexpectedly soft support coming from the northern provinces of East and West Azerbaijan, including his home city of Tabriz. It is likely more useful in a context of numbers-checking to instead compare the Ahmandinejad totals to those of someone he has run against before. Medhi Karroubi, over whom Ahmadinejad advanced to the 2005 runoff round by just 700,000 votes, was surrounded by controversy in that election as well, arguing that Ahamdinejad’s totals had been inflated by conservative hardliners. His openly accusatory allegations to the Supreme Leader resulted in his resignation from several top political posts. 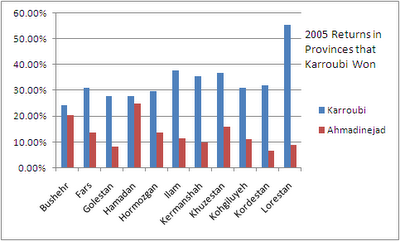 Karroubi was the leading reform candidate of the 2005 election cycle, in close competition with one other reform candidate, one centrist, and two conservatives, including Ahmadinejad. He won in 11 of Iran’s 30 provinces, the most of any candidate that year, and was within 2 points of advancing to the run-off. It was a strong showing, which encouraged him and his backers to challenge Ahmadinejad again this year.

Polling put his candidacy at around 7-10% of the national vote this time around, with the strong incumbent expected to pull more in the first round than he did in 2005 (19.1%). Karroubi’s numbers in his provinces of strength were better, with polling regularly put him at around 20-25% in his home region, with particular strength in the provinces of Lorestan, Ilam, and Khuzestan. This is where the provinicial results get fishy: 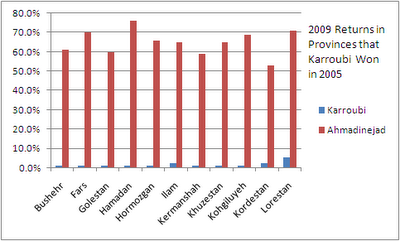 Not only did Ahmadinejad beat Karroubi in his base of support, he crushed him beyond all recognition. Karroubi’s share of the vote in Lorestan was cleaved by a factor of ten, and in only two other of the provinces did he break above 1%. Even with a consolidation of conservative support, and possible defection of Karroubi supporters to Mousavi (who was likely perceived as the candidate more likely to win) this large of shift is hard to imagine.

Again, as we have mentioned on several occasions, the numbers still do not prove any wrongdoing, as large scale changes in public opinion do happen regularly around the world. However, given the polling data in the run-up to the balloting, and the historical trend away from electoral domination in the first round by one candidate, this very fishy regional data tends to strongly support that which the canceled Mousavi protest was meant to express.

Also: Summary argument printed in the Independent (UK)
—
Renard Sexton is FiveThirtyEight’s international columnist and is based in Geneva, Switzerland. He can be contacted at sexton538@gmail.com