The eventful aftermath of June’s heavily contested Presidential election in Iran, which was marked by evidence of fraud, violence and the eventual declaration of victory for conservative President Mahmoud Ahmadinejad by the Supreme Leader, now seems like a blip on the radar.

Friday’s announcement by the US administration and allies marked a return to normal for US/EU-Iranian relations, an aggressive relationship defined by threats and discussions through intermediaries. The US and allies are redoubling their efforts for tougher sanctions against Iran, which now has only a Chinese veto threat to overcome on the UN Security Council.

These days, most discussions of Iran in the North American and European media inevitably focus on the Iranian nuclear programme, while the contested election added a second element of democracy, human rights, and so forth for some time.

Perhaps more interesting at the current time is the economic conditions in the country, an issue that played an important role in the political turmoil that gripped Iran for weeks after the June elections. In addition, economics has some important implications at the international level.

As summarized by the Congressional Research Service in a report to the US Congress in 2008:

“Iran’s economic policies [since 2005] have worked to reduce regional and class disparities through oil wealth redistribution. Mr. Ahmadinejad has tried to reduce unemployment and poverty through expansionary monetary and fiscal policies, including large energy subsidies and
subsidized lending.”

Oil exports are very important for the embattled regime, providing more than 40 percent of government revenue. While the petroleum sector only represents 10 to 20 percent of Iran’s GDP, it supports the income redistribution, subsidies on gasoline and other products that drew Ahmadinejad many rural supporters.

Though flush with petroleum reserves — over 130 billion barrels (about 10 percent of proven global reserves) — Iran is a net importer of finished petrol products, such as gasoline and diesel. Low refinery capacity forced the country to import a significant portion of the more than 400,000 barrels per day in 2006 and 2007, though gasoline rationing that began in June 2007 began to reduce the import burden*.

This all worked quite well when oil prices were high. From 2005 to 2008, Iran had a quite significant and favorable trade balance, buoyed by crude oil prices reached nearly $150 per barrel in July 2008, after breaking the $100 mark in January. By December, however, light sweet crude was selling at a mere $33.87.

As a result, big deficits and growing discontent among both the rapidly urbanized next generation and frustrated traditionalists created a perfect storm for political discord.

Economic and social populism and political shenanigans are quite effective in the short term, as recent rural (and significant urban) support for Khamenei and co. has shown. As well, distracting the public from significant domestic malaise through international posturing, while a time honored tradition by embattled leaders throughout the world (us or them!), only buys so much time.

While overblown by the western media, the June unrest in Tehran showed significant cracks in the regime. Thirty years after the fall of a corrupt and beholden monarchy, many promises of prosperity and commitment to revolutionary ideals have been slow to be fulfilled for many.

At the same time, Iran’s main trading partners have a number of economic incentives that have driven the international thinking on sanctions and security. While the United States, which has maintained an embargo on trade with Iran since the 1979-1981 hostage situation, remains relatively insulated from Iran economically (though globalized trade and multinational companies mean that this is only partially true), many major European and Asian nations are tightly intertwined.

Figures from January to May 2009 indicate that China, the remaining major adversary to sanctions, relies on Iran for more than a half a million barrels of oil per day – about 15 percent of their portfolio. 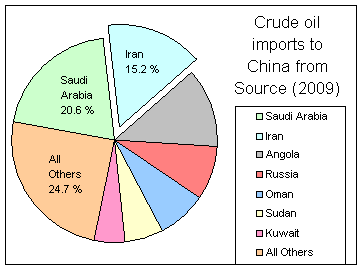 China has a diversified portfolio, with sources that range from central Asia, east and west Africa, and traditional OPEC sources in the Middle East. However, both volatile Iran and stable Saudi Arabia represent significant portions of the imports. With demand rapidly growing in China, Iran’s portion is 15 percent they cannot afford to lose.

At the same time, other US allies are big purchasers of Iranian crude. Though this are largely private sector deals, rather than state-run operations, it is clear that Iran’s oil flows are important to the market – something that instability, sanctions and escalation would scuttle. At the same time, other OPEC countries, hurting in a time of low oil prices, would be happy to let instability in Iran drive the market prices up. 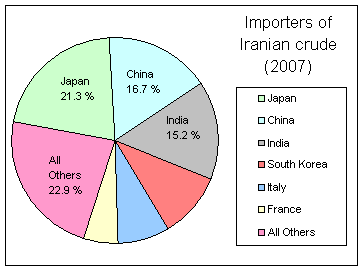 Finally, at the commercial level, gasoline continues to be supplied by major European retailers, such as BP (UK), Total (France), Shell (Netherlands), as well as Russian and Chinese companies.

Moving forward, the forces within Iran will continue to adjust and change, as will the expectations at the international level. Though the US continues to be driven by memories of the hostage situation and worries about WMDs, the evolving conditions inside Iran and the country’s economic relationships demand a more nuanced view.

While posturing by the UK, France and the US may put pressure on Iran to weaken the nuclear programme, it strengthens and provides future political ammunition for the weakened Iranian regime. While the US refuses to do business with Iran, it now has few tools to threaten with, short of risky military action. There are no serious non-military sanctions that the US can demand that are not fully dependant on the actions of the international community, especially China and Russia.

The Obama administration has endorsed this view — that a strategy is needed that reaches beyond sword rattling and refusing to officially speak. So far, however, no concrete actions have been taken that show what this new approach would entail.

The G5+1 meeting with Iranian leaders will be an interesting starting point, where the soft edge of the Obama “dual track“is at work, accompanied by hard edge calls for new UN sanctions. The US hope is for the international community, especially the UN, to play a stronger admonishing role – something helped by Susan Rice’s cabinet status and Obama’s appearance at the GA. At the same time, the US and allies will require a new way of thinking that acknowledges a wider set of incentives , both inside Iran and outside.
—
Renard Sexton is FiveThirtyEight’s international columnist and is based in Geneva, Switzerland. He can be contacted at sexton538@gmail.com