Historically, candidates from neighboring states have had a checkered record in the Iowa caucuses, in contrast with the clear home-field advantage that exists for candidates from next door to the Granite State. In total, I identified 17 “major”1 candidates from Minnesota, Wisconsin, Illinois, Missouri, Nebraska, South Dakota or Iowa itself who have run in the caucuses since the modern primary era began in 1972, but only six of them won at least 20 percent of the vote and finished in either first or second. The 11 other candidates flopped, receiving 11.2 percent of the vote or less. One candidate even finished in eighth. (For comparison, in New Hampshire, politicians from neighboring states have always finished in the top two.)

For instance, I found that the national polling average of Iowa-native and Iowa-adjacent candidates in the 30 days leading up to the caucuses was 11 points, on average, but for New Hampshire-adjacent candidates, it was nearly double that at 21 points.

But that’s not all that’s going on here. New Hampshire-adjacent candidates also did much better (19 points better, in fact) in the New Hampshire primary than their national polling average in the 30 days leading up to the primary. In Iowa, local candidates overperformed, but not by nearly as much. On average, these candidates did just 6 points better in the caucuses than they did in an average of national polls conducted in the 30 days before the caucuses — and that includes one candidate, then-Sen. Tom Harkin in 1992, who improved upon his national polling average by 70 (!) points in Iowa. (Harkin is the only major presidential candidate in the modern era actually from Iowa, so it’s not necessarily that surprising that he basically scared the other Democratic candidates away from competing there.) If we remove Harkin from the equation, Iowa-adjacent candidates’ advantage falls to 3 points, on average. That’s barely any better than the 1 percentage point by which candidates not from the area overperformed their national polls in Iowa, on average. 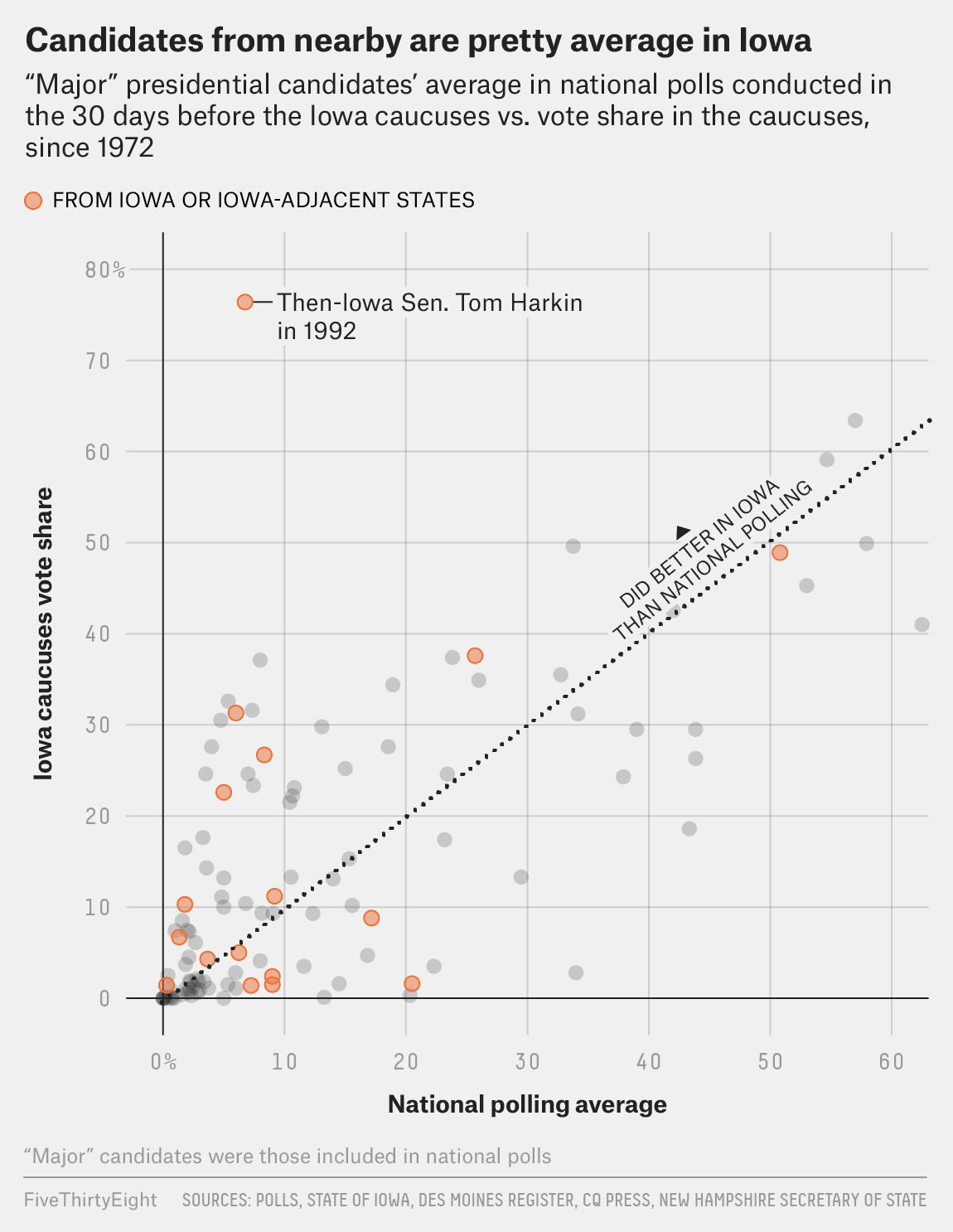 This is admittedly subjective, but I would also say that New England has a more uniform identity than the Midwest does. State borders seem to matter more in the Midwest (for example, most of New England roots for the same sports teams, but that is not true of the Midwest), and the Midwest is more heterogeneous. Perhaps this is why some candidates from neighboring states outperformed their national polls in Iowa, and others did not.

As for this year, the question of whether home-field advantage exists in Iowa might not matter much. That’s because there aren’t any candidates from Iowa currently running for president.2 There is one major presidential candidate from a state that borders Iowa: Minnesota Sen. Amy Klobuchar. And she does appear to be putting a lot of her eggs in Iowa’s basket. But unfortunately for her, merely being from next door does not appear to give a candidate much of a boost in the Iowa caucuses. In fact, Klobuchar’s fellow Minnesotans (Hubert Humphrey, Eugene McCarthy, Walter Mondale and Michele Bachmann) have all done worse than their national polling average there.