Mitt Romney has led Ron Paul in five of the seven Iowa caucus polls released since Christmas. A sixth one has them tied, leaving only one survey that still has Mr. Paul ahead.

Mr. Romney’s lead is small in all of the polls — usually just a couple of percentage points — and there is room to critique their methodology in some cases. Nevertheless, after such a highly volatile campaign, this is what passes for a consensus. The FiveThirtyEight forecast model now gives Mr. Romney a 63 percent chance of winning Iowa on the basis of these polls, his highest figure yet.

Let me quickly run through the numbers for the top six candidates in Iowa. This is starting to look less like a two-man race between Mr. Romney and Mr. Paul, and more like one with a clear front-runner in Mr. Romney, whom several candidates have the opportunity to upset. 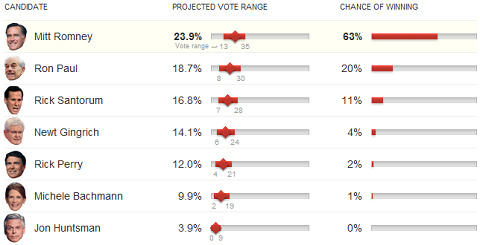 Mitt Romney. What’s interesting about Mr. Romney is that his numbers have barely moved in Iowa. Had we run the forecast model about 45 days ago, on Nov. 19, he would have been projected to receive 21.5 percent of the vote. Now he’s projected to get 23.9 percent. The difference is that it now looks as though as little as 20 percent of the vote might be enough for a candidate to win Iowa, while 25 percent might give him clearer chances. The lowest winning percentage in previous caucuses belongs to Bob Dole, who won with 26 percent of the vote in the Republican caucuses in 1996. There’s a good chance that this year’s winner will poll less than that and break the record.

The worries for Mr. Romney remain that his lead is not all that large, that candidates with his profile have typically underachieved their polls on caucus night, and that expectations are now quite high for him, potentially magnifying the fallout from a disappointing performance. The 90 percent confidence interval on Mr. Romney’s forecast, which is determined based on the historical error in the polls, runs between 13 percent and 35 percent. He’d love the latter outcome, of course, but the former could have him finishing as badly as fifth place.

Still, Mr. Romney enters the final weekend in the strongest position in Iowa. And there seem to be no sustained negative attacks against Mr. Romney or negative story lines that could slow his momentum at the last moment.

Ron Paul. It seems as if the controversy over the newsletters issued under Mr. Paul’s name, which contained a variety of racist and vitriolic statements, is taking a toll on his numbers around the margin. One particular worry for Mr. Paul is that the We Ask America poll — the most recent survey of the bunch, since all of its interviews were conducted on Thursday — had him all the way down to 14 percent of the vote and barely holding onto third place. He still has a clear chance of winning. But that may depend upon a strong turnout from young and independent voters on caucus night.

Rick Santorum. Mr. Santorum, on the other hand, has positive momentum heading into the closing weekend. With strong favorability numbers across several surveys as well as an increased amount of media buzz, he may have as much upside potential as any of the candidates. On Thursday, our model gave Mr. Santorum a 7 percent chance of winning the caucuses, and I said I thought that seemed too low. On Friday, his chances are up to 11 percent, and that still seems too low.

Newt Gingrich. Mr. Gingrich’s numbers remain on an unfavorable trajectory, as has been the case for the past few weeks. A win for Mr. Gingrich remains mathematically possible, but it would qualify as a huge upset at this stage. The good news for Mr. Gingrich is that if he cashes in on that lottery ticket, it would be so unexpected that it might completely revitalize his campaign. I’d like his chances a little better if he had more money to invest in last-minute advertising or in a better ground operation.

Rick Perry. Mr. Perry may find himself lamenting what might have been. If he rather than Mr. Santorum had received a nudge from the Family Leader, an influential evangelical group, last week, for instance, perhaps he’d be the candidate with the late momentum. If so, Mr. Perry would make Mr. Romney very nervous, since he has more resources than most other candidates for an extended campaign after the early-voting states.

Still, Mr. Perry should not entirely be written off. His momentum is not negative but neutral at worst (and slightly positive in some surveys). And after Mr. Romney, he should have the most money to spend on advertising. The 90 percent confidence interval on his forecast runs up to 21 percent of the vote, which gives him an outside chance of winning and a decent shot to finish in second or third place.

Michele Bachmann. Mrs. Bachmann’s numbers are not all that much worse than Mr. Perry’s. But the buzz surrounding her campaign is negative given her staff departures of past days. Because her supporters tend also to be favorably disposed toward candidates like Mr. Santorum, she could see her numbers shrink if they defect toward other candidates. Nevertheless, Mrs. Bachmann closed strongly to win the Ames Straw Poll in August, something which has been a good test of organizational strength in the past. At this point, those efforts might be deployed more to salvage a chance at third or fourth place rather than giving her much of a shot to finish in the top two.