A new Public Policy Polling survey in Iowa, conducted Saturday and Sunday, shows a virtual three-way tie in advance of the Iowa caucuses. Ron Paul has a nominal lead with 20 percent of the vote in the poll, followed by Mitt Romney at 19 percent and Rick Santorum at 18 percent.

Our forecast model, which combines the Public Policy Polling survey with other recent polls of the state, also shows an effective three-way tie, although it has Mr. Romney ahead by the slimmest of margins. The model projects Mr. Romney to receive 21.0 percent of the vote, followed by Mr. Paul at 20.6 percent and Mr. Santorum — whose numbers have been on the rise — at 19.3 percent. 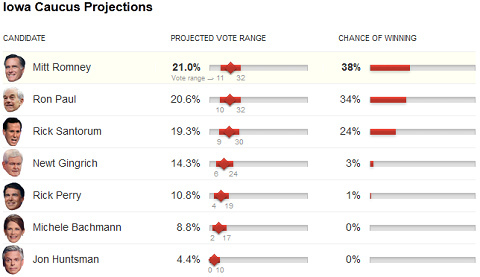 The most noteworthy feature of the Public Policy Polling survey is that it shows a slightly worse result for Mr. Romney than The Des Moines Register Iowa Poll, which was conducted Tuesday through Friday and had Mr. Romney at 24 percent of the vote.

We can interpret this in one of three ways. It may merely be random variance. It may reflect methodological differences between the surveys; the Des Moines Register poll calls cellphones, for instance, and uses live interviewers, which the Public Policy Polling survey does not. (Previous Public Policy Polling surveys have shown slightly better results for Mr. Paul, and slightly worse ones for Mr. Romney, than those conducted by other polling firms.)

Or it may suggest that that there has been a percentage point or two worth of erosion in Mr. Romney’s numbers, since the Public Policy Polling survey is the more recent of the two. Even 24 hours can make a material amount of difference in polling accuracy in advance of a competitive primary or caucus, since perhaps as many as 40 percent of voters only settle upon a candidate in the closing moments of the campaign.

There is some slight evidence for the latter theory in that Mr. Romney performed slightly worse in interviews that Public Policy Polling conducted on Sunday, receiving 18 percent of the vote to the 21 percent he received on Saturday. (When polls provide a day-by-day breakdown of their results, as Public Policy Polling and The Des Moines Register recently have, our forecast model treats each day as tantamount to a separate survey.) The Public Policy Polling survey took an unusually large sample, with 1,340 likely voters interviewed over the two-day period, which makes these comparisons slightly more meaningful. 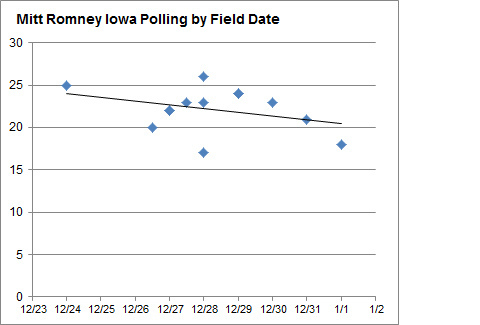 But there is also room to critique the Public Policy Polling survey. It did not call cellphones, although prior polls which broke out results by cellphone usage suggest that this is more likely to harm Mr. Paul than Mr. Romney or Mr. Santorum. It was conducted on New Year’s Eve and New Year’s Day, dates that pollsters would typically avoid, although that is difficult to do in a year when the caucuses are held on Jan. 3.

Mr. Romney’s campaign appears to be treating Mr. Santorum as a serious threat. On Sunday, Mr. Romney chided Mr. Santorum for being a “career politician,” an attack Mr. Romney had previously used against candidates like Mr. Gingrich and Mr. Perry at moments when their fortunes had seemed to be on the rise.

We can get a hint about where Mr. Santorum’s new-found support is coming from by looking at the second-place choices of his voters, which the Public Policy Polling survey tracked. Consistent with the conventional wisdom, the majority of it is coming from other socially conservative candidates, particularly Michele Bachmann and Rick Perry. Still, about 15 percent of Mr. Santorum’s voters list Mr. Romney as their second choice, which means Mr. Santorum’s rise in the polls may have shaved about 2 points off of Mr. Romney’s total. (Very little of Mr. Santorum’s support, on the other hand, appears to be coming from Mr. Paul.) 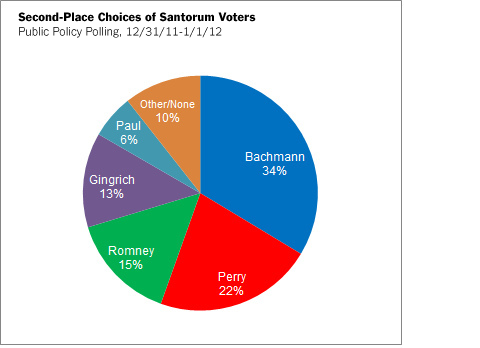 Ordinarily, it would not be worth worrying about such trivial differences, but they have more relevance in this case because of the extraordinary closeness of the race and the large number of voters who have told pollsters that their choice is not yet locked in.

It is likely that at least one or two more polls will be released on Monday or even on Tuesday morning, which could provide slightly more clarity. It is indisputable, however, that there are at least three plausible winners of the caucuses. As J. Ann Selzer noted after she conducted The Des Moines Register’s poll, slightly different but entirely reasonable assumptions about turnout could tip the advantage to Mr. Romney, Mr. Paul or Mr. Santorum, as could the choices made by undecided voters.

For reasons I described last week, I view Mr. Santorum as having some slight advantages when you look beyond the top-line numbers. In particular, candidates with Mr. Santorum’s ideological positioning, like Pat Robertson, Pat Buchanan and Mike Huckabee, have slightly overachieved their polling in past Republican caucuses.

Our forecast model also asserts that there is a small chance — about 3 percent — that Newt Gingrich could pull off a miracle victory in Iowa. Mr. Gingrich finally got some good news last week, when he received the endorsement of Steve Deace, an influential radio host, and word leaked that the Web site Newsmax.com would broadcast a 30-minute feature that depicts Mr. Gingrich in a flattering light. Still, because Mr. Gingrich is thought to have a weak organization in the state, that is not a long-shot bet I would personally recommend.