I’ve been working for some time on developing an alternative to Cook’s Partisan Voting Index (PVI). Not that there’s anything wrong with PVI; it’s a pretty robust little metric. But, PVI is derived from voting in Presidential elections, whereas normally it’s used to help forecast, or contextualize, Congressional elections. Are there any systematic differences in the ways that votes tend to fall for the Congress, as opposed to the Presidency? Are certain districts better or worse for Democrats, or Republicans, than PVI alone would suggest?

The way in which I uncovered this was to look at 142 races for the U.S. House since 2002 in which there was no incumbent running. I excluded cases in Georgia and Texas before mid-decade redistricting had occurred in those states, since my demographic database only pertains to current Congressional boundaries, but otherwise every open-seat race in the last four cycles was included. Which variables were useful in predicting the winner of these races?

After running a copious number of logistic regression models on a copious number of variables, the only other thing that seems unambiguously to matter is socioeconomic status, which I measure by the percentage of households with incomes below $25,000. This is pretty unambiguous, in fact, as the variable has predictive power at the 99.9%+ plus certainty level. 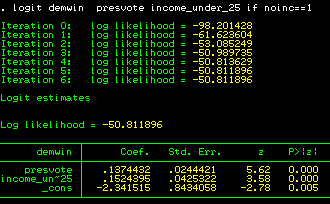 You could certainly look at a different specification of income, like the poverty rate or median household income, and do just about as well. And you wouldn’t give up much if used a highly correlated variable like education instead. The point is simply that taking socioeconomic status into account in addition to PVI is helpful. Most of the places where Democrats hold seats in the House in spite of a disadvantageous PVI — think TX-17 or MS-4 or TN-4 or OK-2 or the couple of Democrats in West Virginia — are poor, and most of the places where the reverse is true — think Mark Kirk in upscale IL-10 or Mike Castle in Delaware — are fairly well-off.

I happen to think this makes a certain amount of sense. As we’ve seen in the past few years, Congress has a tremendous amount of control over economic policy. On the other hand, it has relatively little control over foreign policy, and “values” debates are mostly fought at the state level, or in the courts. Nor will Congressional campaigns usually invoke the sort of big, sweeping cinematic narratives that Presidential campaigns often try to. People are basically just voting their pocketbooks most of the time.

What about other variables beyond income? There are hints that certain things might matter. There’s some very limited evidence, for instance, that once you control for income, Democrats do slightly worse for the Congress in districts where there are a lot of black and Hispanic voters, because they may be less likely to turn out in midterm elections. There’s also some evidence that how a district aligns relative to its state is important, i.e., bluish districts in red states tend to be quite blue in how they vote for Congress, and reddish districts in blue states tend to be quite red. But none of it is particularly robust, and this is a case where there are a lot of dangers to overfitting one’s model, particularly given that what applied in the past may not necessarily apply in the future. So, we’re keeping it simple.

You’ll also notice that I only looked at open-seat races, and not races involving incumbents. This is because, once you get elected to Congress, all bets are off — a likable incumbent with good constituent services can defy gravity for a very long time, and what you’re essentially seeing in a lot of the data for incumbent races are echoes of demographic trends that might have been pertinent years or even decades ago. Restricting the analysis to open-seat races is a lot cleaner.

Thus, Partisan Propensity Index, or PPI, is defined as the percentage chance that the Democrat would have won and open-seat race for Congress in a particular district given the conditions present, on average, between 2002 and 2008 (a period which conveniently featured two good cycles for Republicans and two good ones for Democrats). It contains only two variables: the Presidential vote share in the district and the percentage of households there with incomes below $25,000.

PPI ratings for all 435 Congressional districts are provided below.