There’s something funny going on over at Intrade with respect to the pricing of the Obama and McCain contracts.

Right now, Obama is trading at 52.3 points. That is, Intrade implies that he has a 52.3 percent chance to become the next President.

Now, I happen to think that is a patently absurd price. But you don’t have to take my word for it. Over at BetFair, another large UK-based gambling and futures site, you can also buy an Obama contract. But the price there is 1.62, which implies a 61.7 percent chance that Obama will become the next President.

That is a huge spread, 51.5 points versus 61.7 points. This is the equivalent of the Giants being 3-point favorites at the Bellagio Sportsbook, and 7-point favorites at the Mirage down the block. Those things just don’t happen in efficient, sufficiently liquid markets, because they create arbitrage opportunities: you’d lay $10,000 on the Giants at the Bellagio and $10,000 on their opponents at the Mirage. Any time the Giants win by fewer than 3 points or more than 7 points, you lose nothing, since your two bets cancel out. But any time they win by fewer than 7 points but more than 3, you win both bets, and take home $20,000 (less the casino’s vigorish) for absolutely no risk. Pretty good deal, right? That’s exactly what’s happening with these futures contracts.

It does seem to be Intrade specifically that’s out of line, rather than Betfair. At Iowa Electronic Markets, yet another political futures exchange, the probability of the Democrats winning the popular vote is about 61 percent. They don’t have an electoral vote contract, but if they did, presumably that number would be a little higher because of the structural advantages Obama has in the electoral college this year that we’ve discussed here at length.

In fact, the Intrade pricing doesn’t even seem to be internally consistent. If you look at their pricing in individual states, they have Obama at no lower than 60 percent or so in each of the Kerry states, as well as in Iowa, Colorado and New Mexico. And Virginia, Nevada and Ohio are all at about 50:50. The relationships between the odds of winning any given state and the odds of winning the electoral college are difficult to determine, but I’m pretty sure that Obama should be higher than 51.5 percent given those parameters.

Finally, take a look at the actual pattern of the trading within the last 36 hours: 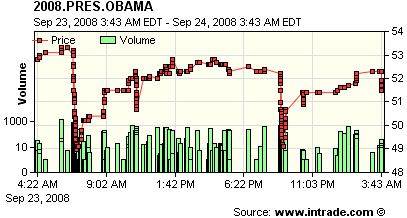 It’s pretty obvious that this is not some sort of random walk. Rather, every so often, some individual trader or some small group of traders are shorting all the Obama contacts in bulk and resetting the entire market. The markets then organically climb back upward until the rogue trader strikes again six or eight hours later. The volumes on these contracts have been very high for the past week as a result.

Most likely, this is just some idiot degenerate gambler who is trying to have some fun. Between the Obama and McCain contracts, there appears to be about $400,000 in contracts changing hands every day, which is a lot by Main Street standards, but minuscule by either Vegas or Wall Street Standards.

What’s a little weird, however, is that this rouge trader is not only selling Obama contracts and buying McCain contracts …. they also seem to be buying Hillary Clinton contracts: 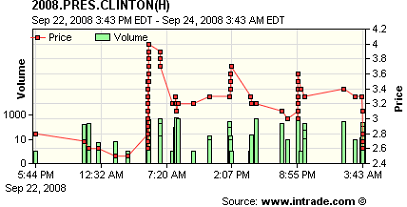 This is the exact mirror image of the Obama trading — in fact, the trades seem to be occurring at exactly the same times. So someone is betting on some sort of disqualifying event happening to Obama.

I don’t think this is any cause for alarm… if Joe Biden contracts were being bought up as part of this scheme, that might be more concerning, but they aren’t. Still, if I were the Secret Service FBI (**), I would probably want to know the identity of this trader. And if I were one of those Beltway pundits who thinks I can be hip by referring to Intrade, I would take a look at the gross inefficiencies in these markets and think better of it.

(**) It seems to me that too much attention is being paid to this particular point. No, I do not think it is at all probable that this is connected to some sort of physical threat to Obama. But I do think it is the job of the FBI to investigate improbable threats. This is the whole reason the Pentagon was arguing for terrorism futures markets a couple of years ago.