Switzerland’s decision, by ballot initiative, to place a constitutional ban on the construction of minarets — an architectural symbol of the Islamic faith — ought to be intriguing to Americans on a number of levels. It’s a reminder that Europe is not necessarily more enlightened than the United States — and indeed may often be less so on matters of race and religion. It’s a warning sign about the limitations of democracy by referendum. And it’s a possible example of some sort of Bradley-type effect, since the initiative was considered an underdog in public polling but wound up winning somewhat overwhelmingly (57.5-42.5) at the ballot booth.

But the Swiss decision is also worth considering on its own merits. Ipso facto, the ban can be classified as an example of religious intolerance. But just what breed of intolerance is it? Does it reflect a sort of post-modern disrespect for religious practice in general — people who basically wonder what all the fuss is about, and treat the ban as nothing more than another sort of building code? Or is it more about distaste for the Islamic religion in particular?

Switzerland is a moderately religious country; it has fewer athiests/agnostics (as a percentage of the population) than most of the “major” European nations, including Germany, England, Russia, France, the Netherlands, Scandinavia, and the Czech Republic, although it’s a bit less religious than a couple of other countries, like Italy. According to official statistics, about 42 percent of its population is Catholic, 35 percent is protestant, 4 percent is Muslim, and 11 percent is nonpracticing.

For a small country, however, Switzerland is also fairly diverse, and this is where things get interesting. If we break the results of the referendum down by canton (province) and compare them against the number of nonreligious people in that region, we find a fairly strong relationship. The more religious the region, the more likely it was to support the ban: 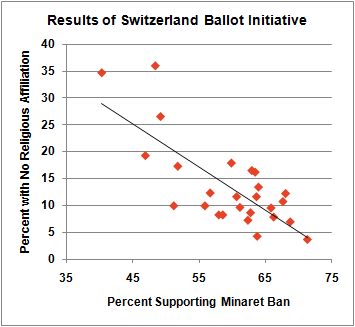 The R-squared, for those scoring at home, is .57 — which is reasonably strong. If we include another good predictive variable, which is the percentage of French speakers in a canton (Francophone regions were less likely to support the ban), we can improve the explanatory power of the model further, up to .80.

There may be variables other than religious and linguistic status at work here — I can’t exactly claim to be expert on the demographics of Switzerland. But it appears at first glance that this indeed reflects some degree of fear, dislike, or anxiety about Muslims — and by Christians. In some ways, then, the analogy to American politics holds up, in which the religious right — fairly or not — is associated with intolerance, and sometimes xenophobia.

But it’s also interesting to consider whether such a ban would pass in the United States. Suppose that the Muslim population were three to four times higher here, making it comparable to the levels in Northern Europe. Suppose that the Muslim minority had started to become a bit more assertive, generally deciding not to pursue a goal of integrating itself into society, and perhaps leading to some relatively minor, but much-ballyhooed, incidents of violence. Suppose that these adherents had started to build a fair number of minarets in smaller towns and suburbs. And suppose that some enterprising, right-of-center party had politicized the issue, and found some loophole by which such construction could be banned by ballot referendum without Constitutional challenge. Would such a ban win majority approval?

I don’t know; respect for religious identity runs pretty deep here. Polling — if it can be trusted on this issue — suggests that Americans have more positive views of Muslims than do most Europeans. And Switzerland is a somewhat idiosyncratic country, with a historical tendency toward isolationism.

My guess is that the ban would probably fail — although the hypothetical I’ve constructed contains some rather important differences from the status quo, placing Islam more literally on people’s doorsteps.

Nevertheless, neither the Europeans nor the Americans would seem to have a monopoly on intolerance. And in contrast to something like homosexuality — the body of evidence suggests that people become more tolerant of gays and lesbians when they have more exposure to them — greater exposure of Islam into Western democracies (it has increased sevenfold in Switzerland over the past 30 years) may indeed breed contempt.