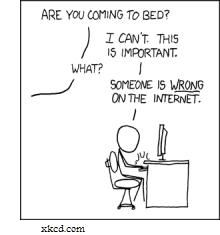 Let me advance a proposition for you. It’s going to be a controversial one. Ready?

The proposition is this: the Internet is really important!

OK, so I’m joking — sort of. That tagline sounds so … 2006. But I think people may nevertheless be overlooking the importance of the Internet in shaping the political landscape that we have today. In other words, a lot of the things that feel “new” about politics circa 2009 are in fact new, but have a lot more to do with information technology than is generally acknowledged.

Take, for example, the manifestations of quote-unquote extremism that we’ve seen recently on both the right and the left. To be somewhat reductionist here, perhaps the Tea Party movement, the Ron Paul movement, and the kill-bill movement qualify as the more benign, constructive forms of “extremism”, and things like the birther “movement” or the PUMA “movement” the more destructive, virulent ones. There’s a very alluring narrative to be had here — one which the mainstream media finds particularly charming — which is that The country is coming apart at the seams! The center is dying! The natives are restless! But is there actually much evidence of this?

Actually, the evidence is pretty mixed. We can look, for example, the General Social Survey, which has been conducted annually or biannually since 1972. One question on this survey, which has been posed in identical fashion since 1974, asks the respondent to identify their ideology on a 1 to 7 scale, where 1 means “extremely liberal” (that’s the survey’s terminology, not mine) and 7 means “extremely conservative”.

We can also look at the standard deviation in these responses; the more polarized/ideological that the country is becoming, the higher this number should be: 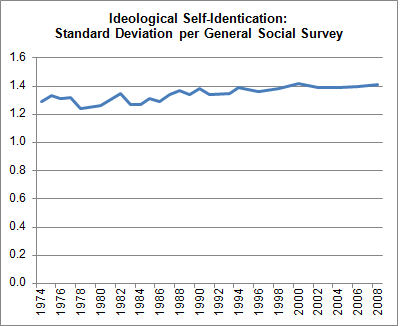 If polarization has increased, it’s been very, very marginal. The standard deviation of these responses on the 7-point scale was about 1.3 in the 1970s and is about 1.4 now. Americans have never liked to think of themselves as holding extreme viewpoints and that hasn’t really changed.

Of course, what it means to be “extremely conservative” and “extremely liberal” is ambiguous — and to some extent these terms are relative. My aunt and uncle, for instance, who are sort of old-school Olympia-Snowe-lovin’ Rockefeller Republicans, would probably have happily defined themselves as “conservative” in the 1980s but would probably gravitate more toward the “moderate” label now — because they don’t like Sarah Palin or gay-bashing or the Tea Party movement and they think that’s now what defines being “conservative”. To their thinking, their viewpoint hasn’t changed very much — the world around them has.

However, more robust survey questions also do not show an increase in “extreme” ideologies. Take, for example, the Harris Poll, which since 1966 has calculated something called the “Alienation Index”. The Alienation Index poses the following five questions to people, and then simply averages the number of people who respond affirmatively to each of them:

1. The rich get richer and the poor get poorer.
2. What you think doesn’t count very much anymore.
3. Most people with power try to take advantage of people like yourself.
4. The people running the country don’t really care what happens to you.
5. You’re left out of things going on around you.

Although alienation is not precisely the same thing as “extremism”, they measure in effect the same thing: the extent to which people feel disenfranchised by the mainstream. And it ought to be a relatively good measure of what might be thought of as “populist” sentiment, which has historically operated on a discourse of the powerful elite versus the disenfranchised masses; populism thrives on feelings of alienation.

But the Alienation Index has not increased, either over the near term or the medium term. In spite of all the trauma that the country went through during the ‘aughts, it’s actually a bit lower now than it during most of the 1980s and 1990s, although higher than it was during the pre-Watergate Era. The Alienation Index also decreased slightly from 2008 to 2009 (although alienation among Republicans increased, this was more than made up for by a decrease among Democrats). This year’s survey was conducted rather recently — back in November — so it should fully incorporate all the Tea Party angst, etc. 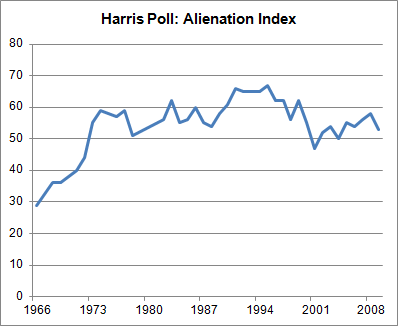 We live in a complex world and I don’t mean to oversimplify this too much. But it seems to me that, rather than a change in underlying sentiments — that is, more prevalence of quote-unquote extreme, alienated, nonmainstream, populist, pox-on-both-their-houses viewpoints — what has instead changed is that these viewpoints have become much more visible. And the reason has to do with technology — to some extent cable news but to a much greater extent the Internet.

Take the Tea Parties, for example. Liberals don’t give nearly enough credit to the technological sophistication of the Tea Partiers. Back in the old days — you know, like 2005 or so — getting several hundred people together at several hundred different locations would have required months of planning. But thanks to the Tea Partiers’ ability to find one another on blogs, Twitter, Facebook, and so forth — and to some extent the megaphone of Fox News — these protests can come together fairly spontaneously. The left’s use of the Internet has been much more heralded, but obviously has been exceptionally impressive too, particularly the extent to which the most listened-to people on the left (think Markos Moulitsas or Jane Hamsher) tend to come from nonpolitical backgrounds. Then there are things like the Ron Paul movement, which would have gotten absolutely no traction without the Internet.

(Of course, the Internet may also foster some of the less reality-based “nontraditional” viewpoints — like birtherism, PUMAism, and probably Islamic extremism. Cass Sunstein has written several books on how, by allowing people to filter their news sources, the Internet may enable people to live in their own virtual bubbles.)

To be clear, I am not suggesting that the changes we’re observing in the political discourse are illusory. Left, right, and “radical” center, activists really are getting together in ways that they couldn’t have before, and really are shaping everything from the lead story on Hardball to the outcomes of entire elections. So too, their expectations are changing (i.e. increasing). This stuff is real, and both the Republicans and (somewhat astonishingly) the White House have often been caught flat-footed in trying to grapple with it.

What I am suggesting, however, is that the fact that “nonmainstream”, “nontraditional” viewpoints are becoming more visible and more activated does not necessarily mean that they’re becoming more prevalent. On the one hand, it’s wonderful that the political discourse is becoming more democratized and less homogenized; that people other than traditional centrist party hacks are becoming empowered. On the other hand, there is probably some tendency to conflate the most extreme viewpoints with those of the respective party “bases”, particularly since — and I’ve been a partial exception to this rule — the squeakiest wheel gets the TV booking. The left and right political blogospheres, the door-knocking activist community, and the base voters in each party are all separate and distinct things. They certainly overlap, but by less than you might think. For example, as much importance as the public option was assigned by online communities, it is regarded as one of the least important aspects of health care reform by Americans on average, and particularly by swing voters.

The Internet is still very, very new! Google didn’t exist when Bill Clinton won his second term; now it’s a $200 billion company, and pervades our day-to-day existence as much as any company has perhaps ever. Meanwhile, there’s been very little in the way of what Tim Berners-Lee calls “Web Science” — the systematic study of the Internet and its impact upon society. Not only did the Internet get a head start on us, but it’s probably changing and expanding faster than our understanding of it is catching up.

What I’m saying, I suppose, is that if the Internet had come along 20 years earlier, the politics of 1989 might have borne a fairly strong resemblance to the politics of 2009. But since the Internet is in fact a relatively new invention — still, really, in its nascent stages — that doesn’t help us to predict the way it might affect politics in the coming years. There’s a tendency to neglect those things we don’t understand and can’t predict — but there needs to be more awareness of the way that the Internet is impacting politics. The change we are seeing is perhaps principally a technological one.