As of 11 AM Eastern time, stocks for the six largest publicly-traded health insurance companies have risen by an average 4.49 percent, as weighted by their market capitalization. As the S&P 500 index had gained 1.09 percent as of 11 AM, these stocks have overperformed the market by 3.40 percent. Although some of the gain may reflect unrelated good news in the health sector, it is safe to assume that most of the improvement in prices reflects improved odds of the Senate’s health care bill passing. 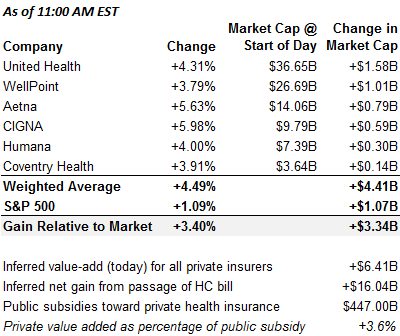 The 3.40 percent net gain translates into about $3.34 billion in market capitalization added. However, these six stocks do not represent the entirety of the private health insurance market. Collectively, they insure about 106 million people (WellPoint 35 million; United Health 26 million; Aetna 18 million; Humana 12 million; CIGNA 10 million; Coventry 5 million) as compared to a baseline of about 203 million private insurance policies nationwide, or about 52 percent of the total. Accounting for the gain in market value realized by the unaccounted-for private insurance companies would bring the total value added to $6.41 billion.

Additionally, the Senate’s health care bill did not go from a 0 to 100 percent chance of passing overnight. Rather, with the news over the weekend that Ben Nelson would support the package, a more reasonable estimation is that it went from having roughly a 50 percent chance of passing to about a 90 percent chance — an improvement of 40 percent. Thus, the run-up in stock prices today reflects about 40 percent of the overall gain in value to the private insurance companies from the Senate’s bill passing. This would mean that the total value added from passage of the bill is $16.04 billion.

That’s a lot of money: $16 billion. But relative to the total outlay from the bill, it is fairly small. Over the course of the next ten years, the Senate’s bill directs about $447 billion in public subsidies to people for the purchase of private health insurance. (This is in addition to another $400 billion or so in subsidies for the expansion of Medicaid). The $16 billion in value-added, therefore, represents about 3.6 percent of the subsidy. Coincidentally — and it is mostly a coincidence, since the numbers are not directly comparable for a variety of reasons — this compares rather neatly to the 3.3 percent profit margin in the health insurance industry overall.

Conversely, the stocks of these companies have improved by 3.4 percent today, relative to the market. But, as per our previous estimate, today’s gain reflects only about 40 percent of the value to these companies of the Senate’s bill passing; this implies that the total gain to these companies from passage of the bill (vis-à-vis the status quo) is 8.5 percent.

You should see that these two numbers — 9.6 percent and 8.5 percent — are broadly comparable. What this probably implies is that the increase in share prices today reflects an expectation of higher volumes — but probably not higher profit margins, which are likely to remain fairly low in the industry.

Yet another neat coincidence is that the roughly $16 billion in value-added we estimate that the Senate’s bill is worth to private insurers is in broadly the same ballpark as the $20-$25 billion that the weak public option was expected to save the government.

The bottom line is that, by the stock market’s estimation, the private health care industry appears as though it will benefit if the Senate enacts its plan. But the benefit — about $16 billion in discounted cashflows — is small as compared to the total magnitude of the program, and likely reflects an increase in the size of their customer base rather than any anticipation of higher profit margins.