In a move that is as blatantly political as it is overdue, Gordon Brown this week announced his support for a referendum on the so-called “Alternative Vote” proposal that has made its way around for the last few years.

Known to the rest of the world as the “Instant Run-Off,” the proposed new system is far from the proportional representation system that dominates continental Europe. However, it is would have an important impact on the numbers game in UK politics, particularly in close elections like this one.

We will start with the figures about what would mean in an electoral context, understanding that, of course, it would not be in place for this election given the need for a referendum beforehand.

The main added-value of the AV (we’ll use the British acronym for now) is that it allows voters to rank their choices, rather than just voting for one prospective MP. In effect, you can still cast that initial protest vote or two without losing the chance to cast your final lot with the lesser of the two remaining evils if your top choice candidate does not make it. In an American context, it would be like if in 2000 all the Ralph Nader voters in Florida could have had their votes switched to their second choice candidate in the case when no candidate reached a majority initially.

If enacted, this would likely have an important impact on quite a number of House of Commons constituencies. 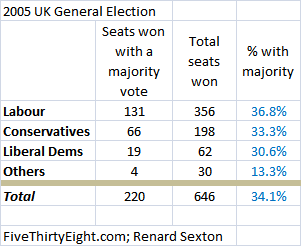 In the last general election in the UK (2005), only 220 seats were won with a majority of the voter — just barely above one-third of the House of Commons’ 646 constituencies. Among the major parties, Labour fared the best, with almost 37 percent of their seats won by majority, while the Conservatives and Liberal Democrats had far fewer, along with the regional parties.

In some cases, mainly in places with strong regional parties, small parties can capitalize on the split vote to prevail. For example, in the “Bethnal Green and Bow” constituency of east London, the left-wing Respect party was able to beat out a safe Labour MP with just 35.9 percent of the vote to Labour’s 34.0 percent.

However, in most cases it is the large parties (Tories and Labour) who profit from the current system, where the first past the post system casts a bit of a chilling effect on voters who would otherwise vote for third parties. For example, in the Ynys Mon constituency of Wales, the Labour MP prevailed with just 34.6 percent of the vote, followed by the regional Plaid Cymru party candidates 31.1 percent, an independent right-wing candidate with 14.7 percent, the Conservative Party’s 11 percent and the Liberal Democrats 7 percent.

So what is the political imperative for Brown to push this proposition forward at this time? Quite simply, it is to appeal to the Liberal Democrats, with whom lie Labour’s likely remaining chance at staying in government. In the case of a hung parliament, as we discussed a couple weeks back, the Lib Dems will hold an important swing position.

According to pollster Angus Reid, about 40 percent of Britons would vote in favor of the AV scenario if given the chance, as compared to 31 percent for the present system. At the same time, 6 percent said they would not vote at all and 23 answered “Don’t know.” However, a majority (52 percent) said that they would welcome a referendum on this issue, while just 20 percent said they would not (28 percent not sure). There was a slight regional variation on the vote, with Scottish, Welsh and English Midlands voters more in favor of the AV than the rest of voters (London, England South and England North).

This indicates good politics for Brown, though the media and most political elites see apparent pandering at play. And for the Lib Dems, who are the clear targets of the policy, this could mean important gains if enacted.

In 2005, there were 32 seats where the Liberal Democrat candidate was within 20 percentage points of the winner, who was either a Tory or from Labour, where the winner got 40 percent or less of the vote.

In each of these cases, the Lib Dems could win by taking half the votes from the losing major party candidate and be victorious (as long as there was no other competitive third party, like a regional party). For example, in Hampstead and Highgate (in north London), the Lib Dem candidate has performed successively better over the last three elections. An AV swing from either or both of the big parties toward the Lib Dem could result in a pickup.

Is it enough to get Nick Clegg and his team on board with Labour in the case of a hung parliament? Certainly not. But the joint draws of a slightly improved electoral landscape and the trapping of governing office may be hard to pass up. Is not the purpose of politicking to finally get to the levers of power?

Next up in our UK general election coverage: We will tackle the troublesome problem of translating national horserace numbers into actual MP totals, something that every observer of the election is trying to negotiate.
—
Renard Sexton is FiveThirtyEight’s international affairs columnist and is based in Geneva, Switzerland. He can be contacted at sexton538@gmail.com