Michigan State men’s basketball coach Tom Izzo, whose Spartans today made their 6th Final Four in the 15 years under his tenure, is rightly regarded as something of a magician when it comes to post-season basketball. But just how good is he? Very, very good, it turns out.

What are the odds of a team with these seedings advancing to the Final Four six times? Very, very low. We can do a good job of modelling a team’s probability of making the Final Four by using a logistic regression model based on the square root of its seeding: 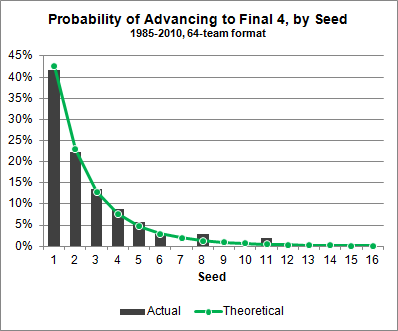 Number 1 seeds, for instance, theoretically have a 43 percent chance of making the Final 4, which closely matches the 42 percent success rate that they’ve actually achieved. So, even though the Spartans have had a #1 seed three times under Izzo, and a 1-seed is “supposed” to win its bracket, it’s to his credit that Michigan State has converted all three times.

A 2-seed, meanwhile, which was good enough for the Spartans to make the NCAA Championship game last year, has only about a one-in-five (22% empirical, 23% theoretical) chance of making the Final Four. And a 5-seed, which the Spartans have used to advance to the Final Four twice, has just a 1-in-20 chance.

Meanwhile, Michigan State doesn’t really have any bad misses. They failed to make the Final Four as a 4-seed in 1998 — Izzo’s first tournament — but 4-seeds have only an 8 percent chance of doing so. They also missed as a 5-seed in 2008. Overall, however, a team with these seedings should only have made about two Final Fours — 1.8, technically, if you don’t mind the decimal — and not the six that the Spartans have actually participated in. 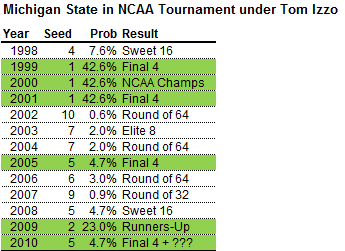 A simple way to analyze how good Izzo has been is to add an ‘Izzo’ dummy variable to our logistic regression model. If we do that, it is highly statistically significant at a 99.99 percent certainty threshold (z = 3.63). Translation: it’s very unlikely that the Spartans have just gotten lucky; Izzo has probably exhibited some real skill at captaining his team in the tournament.

A couple of caveats. First, since Izzo has only been a head coach for Michigan State, it’s plausible that we’re giving him credit when there’s something about the entire program that instead deserves the praise. But since the head coach is so instrumental to building a college basketball team, and since the player personnel rotates at least once every four years and often more rapidly, I’m not sure that’s the same concern it might be in another sport. Every player who has ever played four years under Izzo has made a Final Four.

Secondly, this does not necessarily prove the existence of “clutch coaching”. To do so would require a more rigorous study that evaluated the tournament performance of all different sorts of coaches. FWIW, I also ran this analysis for Duke’s Mike Krzyzewski, and found that Duke’s tournament performance under his tenure fell just short of the 95 percent significance threshold.

Finally, analyses like this are always subject to cherry-picking. Although the odds of any one particular coach doing as well as Izzo in the tournament are very low, the chances that some coach somewhere will have a record like this are considerably higher.

But for the time being, you can enjoy this for what it is. And so long as Izzo remains their coach, you should probably subtract a seed or two from Michigan State the next time that you’re filling out your bracket.

Note: The author grew up in East Lansing, Michigan.