Gov. Scott Walker of Wisconsin, a Republican, is likely to survive a recall election on June 5, according to recent nonpartisan polls of the state.

Mr. Walker leads his Democratic opponent, Mayor Tom Barrett of Milwaukee, by an average of six percentage points in those polls and has not trailed in any poll since February.

Some polls issued by Democratic-affiliated groups have shown a somewhat tighter race, with Mr. Barrett trailing by about three percentage points instead. Partisan-affiliated polls have a long track record of somewhat exaggerating their candidate’s standing, however, and it may be telling that even these polls do not show Mr. Barrett ahead.

In a typical November election, a 6-point lead with two weeks to go would translate into a high probability of winning — roughly on the order of 90 percent, based on the historical accuracy of polls of governors’ races.

The dynamics of a recall election may be slightly more uncertain. But with high turnout expected, which tends to make polling more reliable, Mr. Barrett would most likely need a last-minute change in momentum to have much of a chance of prevailing.

Mr. Walker’s approval rating was poor at this time last year, after he stripped collective bargaining rights from most of the state’s public workers. In May 2011, his job approval rating averaged 42 percent across different polls, versus an average disapproval rating of 55 percent.

In an average of polls conducted so far this May, however, Mr. Walker’s approval rating averages 50 percent, with 46 percent disapproving.

If Mr. Walker’s approval-disapproval ratings were even, he might be a favorite to win the recall election because some voters who are on the fence might nevertheless object to the idea of removing a governor from office in midterm. Since his approval rating now appears to exceed his disapproval rating by a couple of points, that should give him a clearer advantage.

But why has Mr. Walker’s approval rating improved?

The most obvious reason might be that Wisconsin’s economic climate has improved. The statistics on that are mixed, however.

On the bright side for Mr. Walker, Wisconsin’s unemployment rate is 6.7 percent, lower than the national average of 8.1 percent, and it has improved since Mr. Walker took office in January 2011, when it was 7.7 percent.

Some of the improvement in Wisconsin, however, is due to sluggish growth in its labor force, which has allowed its unemployment rate to shrink despite relatively slow job creation. Wisconsin’s labor force was listed at 3.07 million workers in April, the same as in January 2011. (The growth in the United States’ labor force has also been slow, although it has been positive, increasing to 154.37 million from 153.25 million over the same period.)

An alternate measure of the job market is to look at the number of jobs or employed persons, rather than the unemployment rate. According to the Labor Department’s household survey, the number of employed people in Wisconsin has increased to 2.86 million from 2.83 million when Mr. Walker took office, an improvement of about 1 percent.

On the other hand, the Labor Department’s establishment survey, which measures the number of payroll jobs and is sometimes considered more reliable by economists, shows a slight decline in the number of jobs in Wisconsin. That survey lists 2.73 million payroll jobs in Wisconsin in April, versus 2.74 in January 2011, a decline of about 0.5 percent.

By contrast, the number of payroll jobs in the United States as a whole grew to 132.99 million from 130.46 million over the same period, an increase of 1.9 percent.

Broader measures of economic activity in Wisconsin, like the leading index and the coincident index, also slow more sluggish growth in Wisconsin than in the nation as a whole, and forecast somewhat less growth going forward. 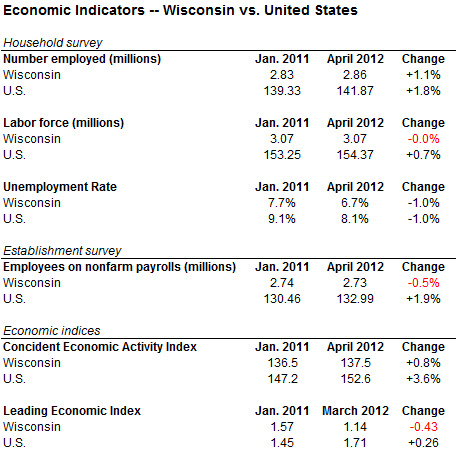 However, the mixed data gives Mr. Walker an argument to make, and he has had a lot more money to make it. Mr. Walker has had a substantial edge in fund-raising, having raised about $25 million since becoming governor, about 60 percent of it from groups and individuals outside the state.

Although labor unions from inside and outside Wisconsin have also devoted substantial money toward the recall effort, Mr. Barrett’s campaign itself has relatively little money, in part because he faced a contentious primary in which cash and support was split between several candidates. As of May 7, Mr. Barrett had raised only about $1.1 million.

A recent poll from Marquette University found that more Wisconsin residents believe the state has lost jobs than added them over the past year. But there is some optimism about Wisconsin’s economic future; 45 percent of residents expect the state’s sconomy to get better over the next year, against 12 percent who expect it to get worse. Those numbers were closer to even in surveys a year ago.

Meanwhile, the collective bargaining issue that inspired the recall effort seems to have faded from memory and does not appear to be much of a burden for Mr. Walker. According to the Marquette poll, 50 percent of Wisconsin residents prefer the law as it is now under Mr. Walker, while 43 percent would prefer the old one.

Generally, however, it is difficult to oust an incumbent governor from office. They win about 80 percent of the time when they decide to run fo
r another term and it usually requires some sort of special circumstance to beat them.

Mr. Barrett does not appear as though he’ll have quite enough of a case.

Instead, Wisconsin seems to have reverted to the mean in which elections there are normally close. But Mr. Walker’s fund-raising advantage and his status as the incumbent, coupled with swing voters’ being uncomfortable with the idea of a recall, will likely be enough to push him over the top.

Such a result will undoubtedly be disheartening to Democrats, although they should remember that an embattled incumbent of their own, President Obama, will be running for re-election in a similarly divided electorate with similarly mixed economic data.