Only one pollster has been brave enough to survey Washington, which will hold its Republican caucus on Saturday. That firm, Public Policy Polling, polled the state once in mid-February and again this week.

The survey showed a shift toward Mitt Romney; he led Rick Santorum by 5 points in the poll, conducted just after his Michigan win, after having trailed by 11 points in the February poll, reflecting the upward trend he has had in other state and national surveys. 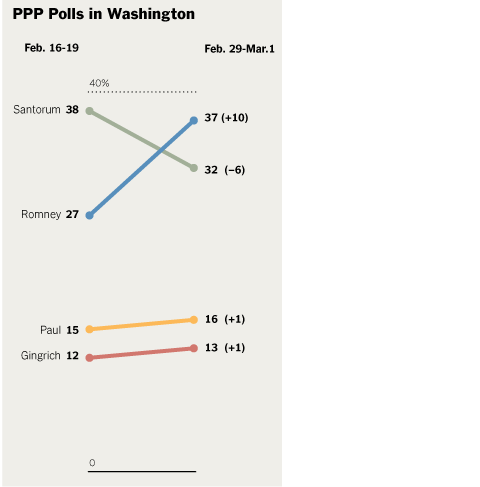 However, the outcome in Washington remains tough to call, and polling in low-turnout caucuses (only about 12,000 Washington residents participated in the Republican caucus in 2008) can be erratic. In Colorado and Minnesota, for instance, which Public Policy Polling was also the only firm to survey, they underestimated Mr. Santorum’s performance substantially.

Therefore, it might be best to take a more holistic approach to the state. FiveThirtyEight talked to Prof. David Domke. Mr. Domke, chairman of the department of communications at the University of Washington, is leading the UW Election Eye presidential election coverage. We also talked to Chris Vance, a former chairman of the Washington Republican Party.

Although it might seem natural to compare the Pacific Northwest to New England, chilly coastal regions that have become reliably Democratic in general elections, they differ in one important respect. In New England, the Democrats are liberal, and the Republicans are relatively moderate. In Washington (and in Oregon), that is less true; while the liberals are still liberal, the conservatives are reasonably conservative, especially outside of Seattle.

Washington also has a few Mormon voters: about 2 or 3 percent of the state’s general population. But like the evangelicals, they are expected to turn out disproportionately for the caucus. The Public Policy Polling survey guessed that they would represent 14 percent of the turnout, which might be high but not by much.

Mr. Romney should do well in western Washington, particularly in the suburbs of Seattle in King County, where there are plenty of mid-level Microsoft executives. Expect Mr. Santorum to do well in the eastern part of the state. Mr. Paul will find support there, too, especially in the Spokane area.

Beyond that, however, the regional turnout patterns in Washington are hard to define. A map (from Wikipedia) of the 2008 caucuses shows an almost random-seeming distribution of county winners from among four Republican candidates, although you can make out a pocket of support for Senator John McCain in King County and around Puget Sound.

But if the polling evidence is thin and the state’s political geography is ambiguous, the support of the local Republican Party is not: it tends to support Mr. Romney. At the top, three of the state’s four Republican congressmen have endorsed Mr. Romney. Moreover, virtually all of the declared support in the party at the grass-roots level, like Republican county chairmen, is behind Mr. Romney, Mr. Vance said. “The people who have been going to party caucuses for 30 years favor Romney,” he said.

The one exception is Spokane County, where Ron Paul backers control the party machinery.

Backing from state and local Republican officials can be especially important in a caucus, since the party sets the rules. In 2008, indeed, there was a dispute over the Washington caucus result that foreshadowed those in Iowa and Maine this year. Republicans there declared Mr. McCain the winner even though only 87 percent of the vote had been counted and the outcome was quite close. Mike Huckabee demanded a recount and a retraction of the call; state Republicans responded passive-aggressively, eventually counting 96 percent of the vote (and still showing Mr. McCain ahead) but never bothering with the rest. In caucuses (and sometimes primaries, too), the tie tends to go to the candidate whom the party establishment supports, and in this case, that is Mr. Romney.

If Mr. Romney’s party backing is an asset, however, the turnout could work somewhat against him, as it has in other caucus states. Some history: In the 1988 Republican nomination race, former President George H. W. Bush carried 41 states on his way to the nomination, former Senator Bob Dole carried 5, and the televangelist Pat Robertson won 4 — one of which was Washington’s caucus. State Republican leaders were so unhappy with the outcome that they scheduled a primary for the next election. In 1992, President Bush won 67 percent of the vote, and that year’s social conservative, Pat Buchanan, managed just 10 percent.

Indeed, if turnout is as low as it was in 2008, Mr. Romney might be at a disadvantage to both Mr. Santorum and Mr. Paul. However, it will probably be higher. In 2008, Washington Republicans held a primary and a caucus, both of which selected some delegates, in a process that must have been confusing to voters. This year, Washington is holding a caucus alone, and turnout could be as high as 60,000, according to some estimates.

Still, that would represent much lower turnout than in a primary. Some 530,000 Republicans participated in the Washington primary in 2008, even though it occurred after Super Tuesday.

Low turnout could favor Mr. Paul, whose supporters – as always – are energetic and committed. “He’s got some real energy on the ground,” Mr. Domke said.

Although Mr. Paul did relatively poorly in the Public Policy Polling survey, where he had 16 percent of the vote, there are some tangible signs of his strength in the state. He has raised $471,000 in itemized contributions in Washington, making it one of his better states on a per-capita basis. (Mr. Romney’s total, $639,000 in contributions, was not much higher.) And Mr. Paul received 22 percent of the vote in the caucus — although just 7 percent in the primary — in 2008.

Both Mr. Domke and Mr. Vance also characterized the Paul campaign as having the strongest ground game, something which could be important since the traditional auspices of the campaign (field offices, phone banking, door-to-door hand shaking) have been relatively absent in the state. Only the Paul campaign has ads on Washington airwaves. Only the Santorum-affiliated “super PAC” has spent any money in Washington — the not-so-grand sum of $2,008.The candidates have visited the state a couple times, but nothing like the attention they lavished on Iowa.

Finally, Washington, like most other Republican caucus states, will hold two separate votes: one a nonbinding “beauty contest” vote for presidential preference, and a separate vote to elect delegates to county and district conventions. Since the delegate-selection portion of the caucus is more time-consuming than marking your vote in the straw poll, it could give some further advantage to the candidate with the most enthusiastic supporters who have the best knowledge of the caucus process — possibly Mr. Paul, who could emerge with the most delegates from the state even if he loses the straw poll.

Washington has all the elements that could make for an unpredictable and surprising outcome. The surprise could favor Mr. Santorum, as it did in Colorado and Minnesota. But it could just as easily be a surprisingly robust margin for Mr. Romney. Or Mr. Paul collecting his first win.

Or another disputed vote count. But would that really be so surprising after all?