We continue our Presidential Geography series, a one-by-one examination of each state’s political landscape and how it is changing. Here is Virginia, the Old Dominion. FiveThirtyEight spoke with Daniel Palazzolo, a professor of political science at the University of Richmond, and Geoffrey Skelley, a political analyst at the University of Virginia’s Center for Politics. 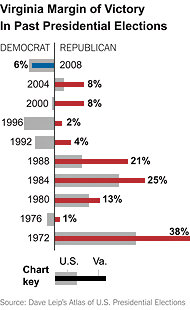 The political landscape in Virginia has shifted dramatically in recent years, and the disagreement among the polls is essentially a disagreement about which Virginia will dominate on Election Day: the reliably Republican “Old Virginia,” which is more religious, rural, working-class and white, or the politically competitive “New Virginia,” which is more secular, urban, diverse and white-collar.

In 2008, New Virginia made its debut at the presidential level, with Mr. Obama becoming the first Democrat to carry the state since 1964. He won by six percentage points.

But in the following two years, Old Virginia has roared back. Turnout in nonpresidential elections tends to be substantially more favorable to Republican candidates. Bob McDonnell, a Republican, won the governor’s race in 2009, and the party picked up three House seats in 2010. Republicans now represent 8 of Virginia’s 11 Congressional districts.

Political analysts often group Virginia and North Carolina together as the “New South.” Both states — reliably red for years — turned blue in 2008, pushed toward the political center by highly-educated white-collar voters who have moved there and by fast-growing Hispanic populations.

But while similar demographic trends have been reshaping both states’ politics, the changes have been more apparent in Virginia. Mr. Obama’s 2008 victory in North Carolina was razor thin. In Virginia, however, Mr. Obama’s margin of victory matched his margin nationwide almost exactly.

Virginia’s political balance has shifted far enough left that it is now very close to a tipping point. In fact, it has the smallest Republican lean, 1.9 percentage points, of any state in FiveThirtyEight’s Presidential Voting Index. North Carolina, by contrast, is almost eight percentage points to the right of the national average.

As Mr. Romney’s polling improved nationally after the first presidential debate, North Carolina appeared to fall off the list of main battleground states. Mr. Romney is currently a 79 percent favorite to carry North Carolina, according to the FiveThirtyEight forecast. In Virginia, Mr. Obama is still favored.

Democrats there have an advantage that Democrats in North Carolina do not: The explosive growth of suburban Washington. 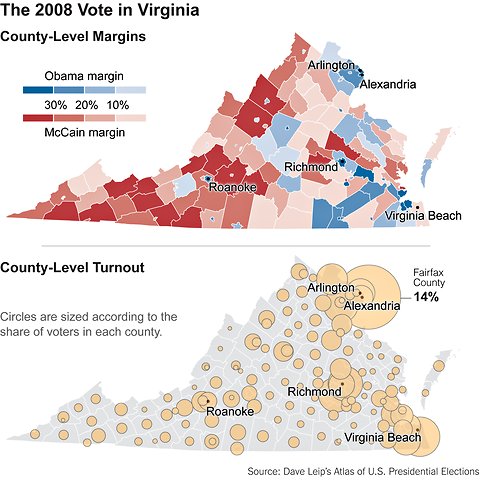 In 1970, Northern Virginia accounted for 12 percent of the state’s population, according to the Almanac of American Politics, and 61 percent of Virginians lived in small towns and rural communities.

But in the 2010 census, one-third of Virginia residents lived in Northern Virginia. The Richmond area and the Hampton Roads region have grown too, and more than half of the state’s residents live in urban areas.

Northern Virginia now has a much greater influence in statewide elections. As the Washington suburbs have expanded, Northern Virginia has become more diverse and better educated. It is home to thousands of government workers and contractors, including many employed by defense and high-tech companies.

Northern Virginia has also become more affluent. The top 3 richest counties in the nation by median income (and 5 of the top 10) are all in the Virginia portion of suburban Washington. Loudoun County is No. 1, followed by Fairfax and Arlington Counties.

Fairfax County — the most populous in the state, with more than a million residents — has been ground zero for the demographic change, Mr. Skelley said. In 1996, Bob Dole edged out Bill Clinton in Fairfax County, and in 2000 George W. Bush beat Al Gore there. By 2008, however, Mr. Obama carried Fairfax County with slightly more than 60 percent of the vote.

Prince William County, southwest of Fairfax, has grown to more than 400,000 residents, and one-fifth of them are African-American and one-fifth Hispanic.

The Richmond area is more politically competitive, Mr. Palazzolo said. The city of Richmond is heavily African-American and Democratic-leaning, but suburban Chesterfield County to the south is Republican territory. Henrico County — which wraps around Richmond — is a tossup. There are state government employees who lean left, and more socially conservative voters who lean right. The eastern end of Henrico County is blue-collar, while the western end looks more like Northern Virginia, affluent and highly-educated. 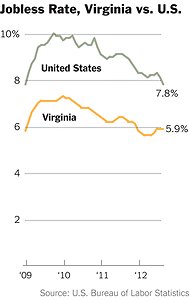 The Hampton Roads region, along the coast in southest Virginia, is also competitive. There are significant African-American communities in Norfolk and Hampton. But Hampton Roads is also home to a number of military installations, including Marine, Army and Air Force installations as well as the largest naval base in the world, Norfolk Naval Station. Virginia Beach,
home to many active and retired military personnel, skews Republican.

Western Virginia is sparsely populated, more rural and economically depressed. It is also ruby red. The gains Democrats have made in Virginia, with a few exceptions, have been in the east.

“If anything,” Mr. Skelley said, “the western, rural part of the state has become more Republican.”

Montgomery County has been an almost perfect barometer of Virginia’s statewide political orientation. Virginia Tech, in Blacksburg, is Montgomery County’s stand-in for left-leaning Northern Virginia, while the area around the university is more Old Virginia, Mr. Skelley said.

In the past three presidential elections, Montgomery County has never been more than one percentage point off of the statewide vote shares of the two parties.

Mr. Obama is a 71 percent favorite in Virginia, according to the current FiveThirtyEight forecast. The model projects Virginia to be one of the closest states, with Mr. Obama prevailing by 1.5 percentage points. If Mr. Romney over-performs his polling even slightly on Election Day, Virginia’s 13 electoral votes will end up in the Republican column.

Suburban communities, particularly in Northern Virginia, are likely to decide who carries the state again this year. Prince William, Loudoun, and Henrico Counties may prove decisive, Mr. Skelley said. All are densely populated, and all were won by Mr. Bush in 2004 and by Mr. Obama 2008.