Presidential primary fields of dubious quality often receive derisive nicknames. The seven Democratic candidates of 1988, for instance, in part because some of them were of short stature and in part because none of them seemed like formidable challengers to George H.W. Bush, were often referred to as the “Seven Dwarfs”.

Let me propose a somewhat pejorative nickname for this year’s Republican field: Mitt Romney and the Seven Salamanders.

Being a salamander is not so bad: they’re pretty darn resilient little creatures and have a variety of techniques to get out of trouble when their days seem to be numbered. Most famous among these is their ability to drop off a limb when a predator ensnares it. Salamanders are then able to re-generate the limb a few weeks later (they are the only vertebrates to have this capability). Newt Gingrich coming back to lead the Republican field when he was down to about 5 percent in the polls and had no money and no campaign staff is pretty amazing — but it’s not nearly as amazing as a salamander re-growing its tail.

Speaking of which, a particularly cunning species of salamander is called a newt. Newts cannot only re-generate their tails and legs, but even their eyes, intestines, and spinal cords.

No, you did not walk into the amphibian biology seminar. Time for some actual political content.

I was struck by a figure in Tuesday morning’s Quinnipiac poll. Quinnipiac took a pretty large sample (more than 1,000 Republican primary voters) and the data point has parallels in other recent surveys of Republican voters, so it does not appear to be a fluke.

The figure is that 48 percent of Republican voters said that Newt Gingrich is the candidate who best embodies the “knowledge and experience necessary to be a good president”. Mr. Gingrich’s number is by far the best in the Republican field; Mitt Romney is in second place at 22 percent, and then everyone else is in the single digits. 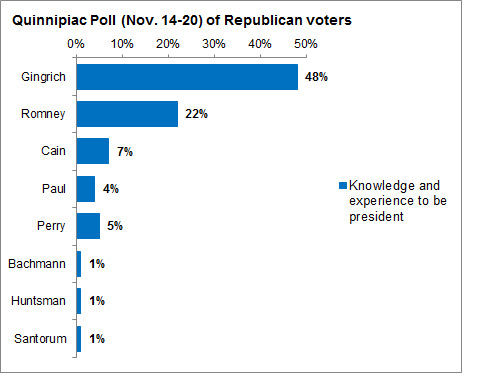 In Mr. Gingrich’s case, however, the 48 percent who say he leads on the knowledge-and-experience dimension nearly doubles the 26 percent overall support he has in the poll. It serves as a counter-balance to other areas in which Mr. Gingrich seems weak — for instance, just 9 percent of Republicans say that he has the “strongest moral character” in the field.

But why do Republicans, who have been very equivocal in differentiating among the candidates until now, feel so strongly that Mr. Gingrich has the right kind of knowledge and experience?

Mr. Gingrich is not so badly credentialed: he is the former speaker of the House and was the de facto leader of his party for roughly a decade. No member of the House of Representatives has won his party’s nomination since James A. Garfield, but most of those who tried for it did not lead the chamber. I don’t see why Mr. Gingrich is inherently less qualified to be president than, say, a former two-term senator from Pennsylvania or a half-term senator from Illinois.

Then again, that experience came more than 10 years ago. The institution that Mr. Gingrich led — Congress — is extraordinarily unpopular, and Mr. Gingrich left it being perceived as something of a failure. Prior to entering politics, meanwhile, Mr. Gingrich had been a professor of modern European history: not exactly a sterling credential with Republican primary voters.

Shouldn’t a candidate like Mr. Romney be leading on the “knowledge and experience” dimension instead? Like Mr. Gingrich, Mr. Romney is manifestly smart. And his resume is a lot more diverse: governor of a relatively populous blue state, the co-founder of Bain Capital, the C.E.O. of the 2002 Winter Olympics committee, and so forth.

Granted, Mr. Romney’s campaign has not always been eager to play the experience card. I thought it was a mistake for his campaign to try to brand Rick Perry as a “career politician” when Mr. Romney is known to most people as the guy who has been running for president for the past six years. But he’s being beaten badly by Newt Gingrich on this criterion?

My suspicion, however, is that many Republicans are not comparing Mr. Gingrich against Mr. Romney on this metric — instead, they’re comparing him against the Seven Salamanders. If you compare how the candidates polled on the “knowledge and experience” question to their overall support in the survey, you’ll find that Herman Cain, Ron Paul and Michele Bachmann all do much worse in the “knowledge and experience” category than they do overall. 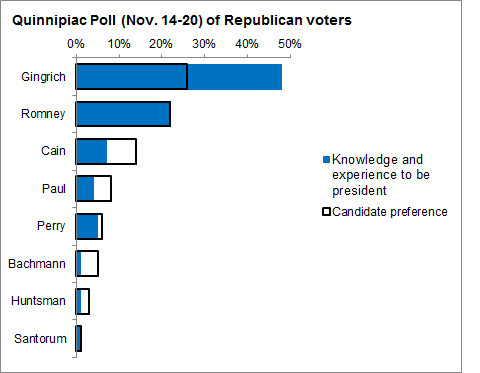 Mr. Romney, meanwhile, neither gains nor loses any ground; the 22 percent of voters who say he has the best knowledge and experience is exactly the same as the 22 percent who say they plan to vote for him.

Rick Perry also does about the same in both categories: 6 percent of Republican voters support him and 5 percent say he has the best knowledge and experience. (Although I suspect that if Republican voters considered “knowledge” and “experience” separately, they’d find that Mr. Perry has plenty going for him on the experience dimension but has been coming up a little short on the “knowledge” part.)

But if you want to make Mr. Gingrich look worldly, experienced and presidential, that’s going to be a lot easier when you put him on a stage with candidates like Mr. Cain and Mrs. Bachmann. A lot of Mr. Gingrich’s current support, I suspect, comes from voters who had once been inclined to support an outsider like Mr. Cain or Mrs. Bachmann or even Donald Trump — but who got tired of hearing about how they weren’t cut out for the job or developed some of those concerns themselves. They found in Mr. Gingrich a candidate who espouses many of the same policies and embodies much of the same fighting spirit — but who seems at least passably presidential.