One of the problems with the claim that the Republican Party is doomed to many years of failure is that it is having plenty of success now — at the state level. The G.O.P. controls 30 of the nation’s governorships, along with a majority of state legislatures.

Some of this is because many of those Republican governors were elected in 2010, a strong year for the party. But that does not reflect the whole story. A Pew survey released on Monday suggests that Americans take a much more favorable view of their state governments than they do of the federal government. The poll also found that state governments controlled by Republicans were slightly more popular than those controlled by Democrats, although states with divided control of government got the highest ratings.

Nevertheless, it’s worth asking why Republicans have achieved success in state races at the same time that they’ve had difficulty in federal ones.

Could it be that Republicans at the state level are running on more moderate platforms? We’ve periodically issued “consensus” liberal-conservative ratings for governors, senators and presidential candidates based on three measures (one, the Congressional voting record for those who have served in Congress; two, public issue statements; and three, the identity of a candidate’s donors). The table below lists the ratings for the nation’s 30 Republican governors as calculated by this method; higher ratings reflect more conservative positions. 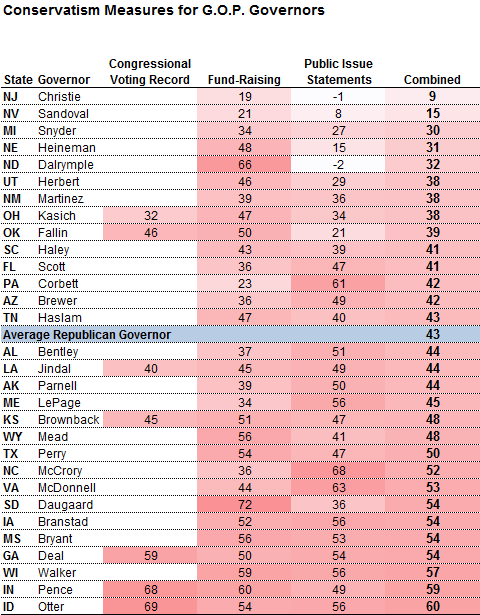 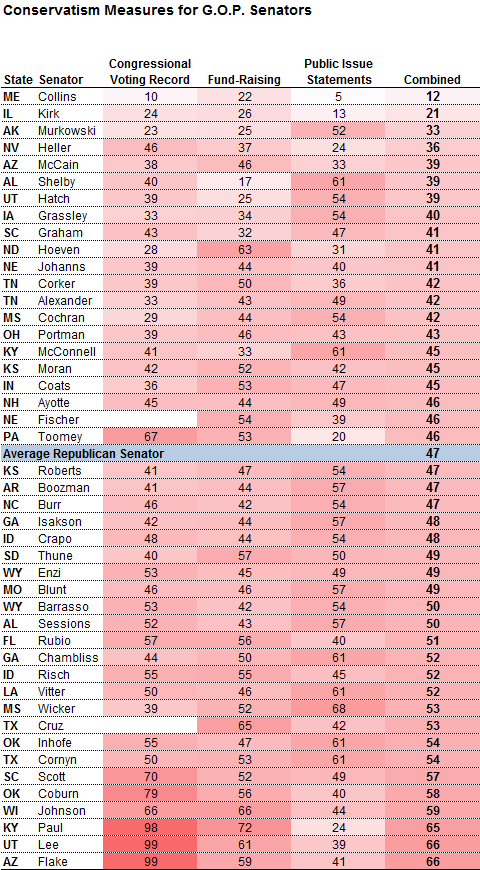 Even if a number of the Republican governors are quite conservative, perhaps they are doing a better job than the senators of catering to the whims of their states.

This is difficult to measure, because a one-dimensional scale of ideology like ours will miss some of the nuances that make the states unique. Nevertheless, there is a very low correlation between the conservative ratings for Republican governors and presidential voting patterns in their states. Governors like Paul LePage of Maine, Scott Walker of Wisconsin and Terry Branstad of Iowa, for instance, are quite conservative based on our scale, but President Obama won their states. 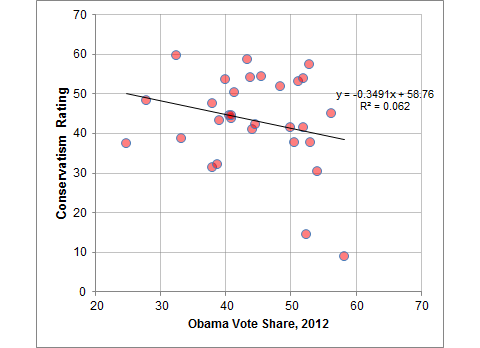 There is an important qualification to this, however. Although Republican governors as a whole are reasonably popular, there are a number of exceptions — and they are generally those cases where the governor is a poor match for a state’s ideological views.

In the next chart, I’ve compared each G.O.P. governor’s conservatism score with his or her net approval rating, based on the method that Micah Cohen used in his recent FiveThirtyEight post on gubernatorial popularity. (Note that five Republican governors have not had their approval ratings measured since the start of 2012, and so are excluded from the analysis.) 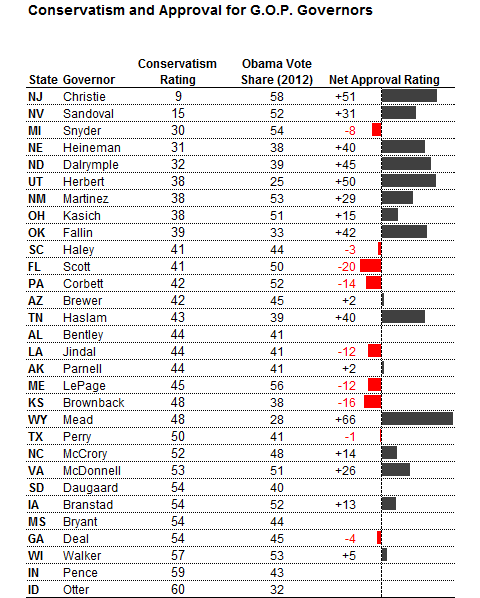 But G.O.P. governors have more leeway to be conservative if their voters are as well. Mr. Obama’s share of the vote in a governor’s state in 2012 and the governor’s conservatism rating are both highly statistically significant predictors of popularity, as shown in the regression analysis below.

We can work backward from the results above to estimate how conservative a Republican governor could be while retaining a net-positive approval rating.

In a state where Mr. Obama won just 40 percent of the vote, for example, a Republican governor could have a conservatism rating as high as 63 without becoming unpopular on net. No current Republican governor has a conservatism rating that high. The governor might be even more popular in one of these states if he moderated his stances toward the center-right, but even a governor with far-right views could be reasonably popular in Kansas or Alabama.

By contrast, in a state like New Jersey, where Mr. Obama won 58 percent of the vote in 2012, a Republican governor would be projected to have a negative approval rating if his conservative score were higher than 38. In other words, if you took an average Republican governor (with a conservative score of 43) and put him in a blue state like New Jersey, we would expect him to be unpopular, on net.

This is simply a statistical demonstration of what ought to be obvious: governors like Chris Christie don’t have the freedom to pursue every line item in the G.O.P.’s national agenda if they want to be re-elected. There may be some Republican governors, like Mr. Walker of Wisconsin, who have the political talent to get re-elected in blue states despite pushing those states to the right, and these governors are extremely valuable to the Republican Party. But they are the exceptions. More common are cases like Gov. Tom Corbett of Pennsylvania, who rates as an essentially generic Republican and is fairly unpopular in a blue-leaning state.

Still, the news for Republicans has been reasonably good at the state level, where their candidates have been freer from the partisan dysfunction in Washington.