SAN FRANCISCO – I live in Brooklyn, where President Obama won 81 percent of the vote this month. It’s hard to find anywhere in the country that is more Democratic-leaning.

And unlike the New York metropolitan area, where Long Island, the borough of Staten Island and many suburbs in New York and New Jersey remain competitive in presidential elections, it is hard to find any significant pockets of support for Republican candidates in the nine counties that make up the San Francisco Bay Area.

Over all, Mr. Obama won the election by 49 percentage points in the Bay Area, more than double his 22-point margin throughout California.

Although San Francisco, Oakland and Berkeley have long been liberal havens, the rest of the region has not always been so. In 1980, Ronald Reagan won the Bay Area vote over all, along with seven of its nine counties. George H.W. Bush won Napa County in 1988.

Republicans have lost every county in the region by a double-digit margin since then. But Democratic margins have become more and more emphatic. Mr. Obama’s 49-point margin throughout the Bay Area this year was considerably larger than Al Gore’s 34-point win in 2000, for example, or Bill Clinton’s 31-point win in 1992. 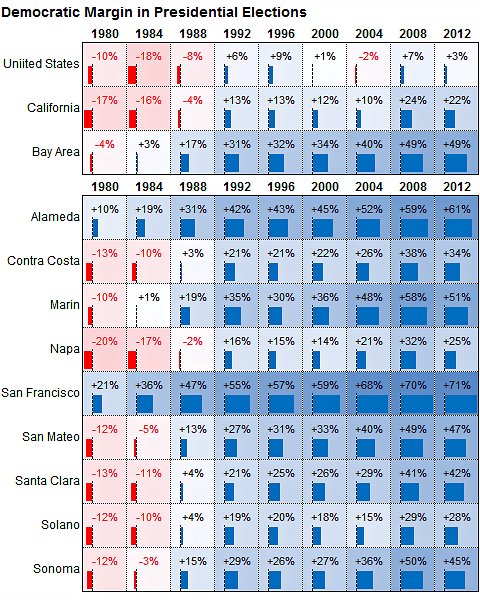 Even without the Bay Area’s vote, Democrats would still be favored to win California by solid margins. So why does any of this matter?

The reason is that Democrats’ strength in the region is hard to separate out from the growth of its core industry — information technology – and the advantage that having access to the most talented individuals working in the field could provide to Democratic campaigns.

Companies like Google and Apple do not have their own precincts on Election Day. However, it is possible to make some inferences about just how overwhelmingly Democratic are the employees at these companies, based on fund-raising data. (The Federal Election Commission requires that donors to presidential campaigns disclose their employer when they make a campaign contribution.)

Among employees who work for Google, Mr. Obama received about $720,000 in itemized contributions this year, compared with only $25,000 for Mr. Romney. That means that Mr. Obama collected almost 97 percent of the money between the two major candidates.

Over all, among the 10 American-based information technology companies on Fortune’s list of “most admired companies,” Mr. Obama raised 83 percent of the funds between the two major party candidates.

Mr. Obama’s popularity among the staff at these companies holds even for those which are not headquartered in California. About 81 percent of contributions at Microsoft, which is headquartered in Redmond, Wash., went to Mr. Obama. So did 77 percent of those at I.B.M., which is based in Armonk, N.Y. 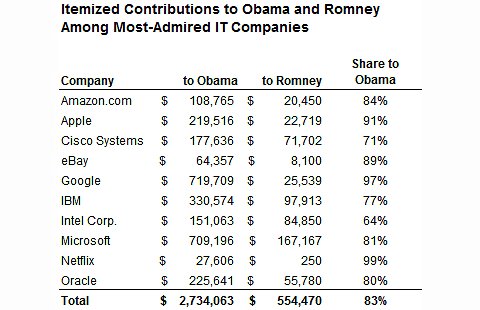 It does not require an algorithm to deduce that the sort of employees who may be willing to donate substantial money to a political campaign may also be those who would consider working for it.

Since Democrats had the support of 80 percent or 90 percent of the best and brightest minds in the information technology field, it shouldn’t be surprising that Mr. Obama’s information technology infrastructure was viewed as state-of-the-art exemplary, whereas everyone from Republican volunteers to Silicon Valley journalists have criticized Mr. Romney’s systems. Mr. Romney’s get-out-the-vote application, Project Orca, is widely viewed as having failed on Election Day, perhaps contributing to a disappointing Republican turnout.

This is not intended to absolve Mr. Romney and his campaign entirely. There were undoubtedly many bright and talented information technology professionals who worked for Mr. Romney, and who might have fielded a better product given better management.

Even if only 10 percent or 20 percent of elite information technology professionals would consider working for a Republican like Mr. Romney, this is still a reasonably large talent pool to draw from.

But Democrats are drawing from a much larger group of potential staff and volunteers in Silicon Valley.

Perhaps a different type of Republican candidate, one whose views on social policy were more in line with the tolerant and multicultural values of the Bay Area, and the youthful cultures of the leading companies here, could gather more support among information technology professionals.

Ron Paul, the libertarian-leaning Republican, raised about $42,000 from Google employees, considerably more than Mr. Romney did.

An earlier version of this post misidentified the publisher of a list of most admired information technology companies. The list was published by Fortune magazine, not Forbes.

A version of this article appears in print on 11/29/2012, on page B1 of the NewYork edition with the headline: Silicon Valley’s Left Tilt Leaves a G.O.P. Tech Gap.