We will soon be unveiling our forecast model for United States Senate races. But as a point of comparison and because there have been a number of important primaries for the Senate in recent weeks, I first wanted to give you my view of the contests.

The battle for control of the Senate looks like a tossup, just as it did in May. In fact, if I were given just one guess at the composition of the new Senate, I would go with this: 50 Republicans, 49 Democrats and one independent, the former governor of Maine, Angus King.

Mr. King is much more likely to caucus with the Democrats than the Republicans, which could mean an even split. In that case, control of the Senate would come down to who wins the presidency, with the vice president — either Joseph R. Biden Jr. or Paul D. Ryan — casting the tie-breaking vote.

The chart below provides my summary of the 33 Senate races. The ratings are subjective, but I am looking at the same factors that our algorithm eventually will. The most important predictive factor is the polls. In the chart, I have listed a simple average of the last three nonpartisan polls conducted in each state. However, I also give some emphasis to the overall partisan lean of a state, the relative qualifications of the candidates, and the amount of money raised in the races so far, which also have some predictive power. 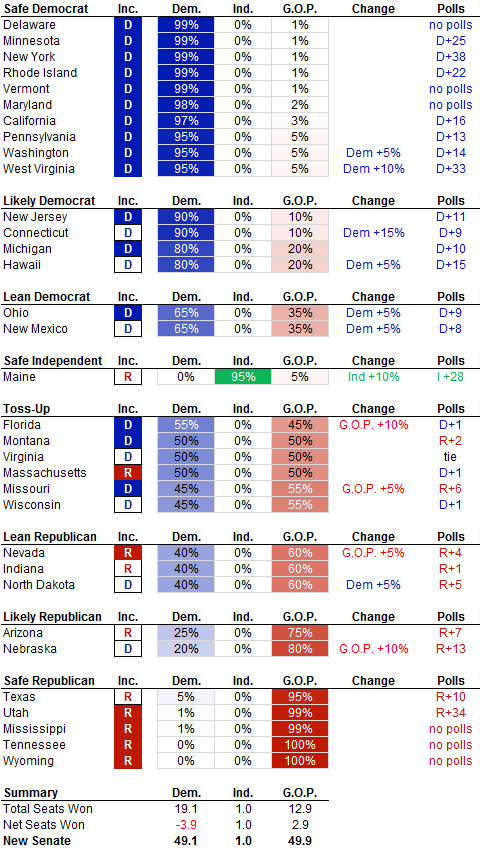 There is no sign yet of a wave breaking toward either party, but some individual races look a little different than they did a couple of months ago. It just so happens that the changes benefiting each party seem to about cancel one another out. There are some cases where the climate now looks improved for the Republican candidate:

There have also been a number of races where Democrats have had encouraging signs.

You see the pattern? Actually, I’m not sure there is one. Middling candidate quality has been a theme for Republicans — but that has been true all cycle long, and the problem would have been worse had they failed to nominate Mr. Thompson in Wisconsin.

Instead, we seem to see the races behaving in a more localized fashion. As some Democratic incumbents like Mr. Brown are looking a bit safer, others like Mr. Nelson seem more vulnerable.

Still, if the modal outcome is one in which we are staying up late on Nov. 6 — and possibly even for days or weeks after that, depending on how much drama Mr. King creates — enough races remain highly competitive that each party retains an impressive upside case in the event that it sweeps most of them.

If Democrats won all of the leaning and tossup races, and Mr. King caucused with them, they would add a net of three Senate seats, bringing the total number under their control to 56. It had once looked highly unlikely that Democrats could actually gain Senate seats. But as the cycle as evolved, they’ve gradually put more Republican-held seats in play — while some of their potentially vulnerable ones, like in Pennsylvania, Washington, West Virginia, and Connecticut — have become safer as Republicans have field to produce strong opponents in them.

And yet, most of the seats up this cycle are Democratic-held, since the 2012 cycle is the “echo” of 2006, an extremely favorable Democratic year. If Republicans won all the leaners and tossups — plus Nebraska, which looks like a likely pick-up for them — they would gain a net of eight seats. That would bring them to 55 seats, even assuming that Mr. King did not caucus with them.

Exactly what are the odds of these outcomes? That’s what a formal statistical model should help us to determine. The Senate contests, with different candidates in each state, are not as likely to move in unison as the different states in the Electoral College in the presidential race. But it is also naive to assume that each race behaves independently. In 2006, 2008 and 2010, one party swept almost all the contests that would have been considered highly competitive at this point in the cycle.

However, absent some change in the national political environment, we’ll go into Election Day with control of the Senate being highly uncertain. Without a wave to sweep them to victory, the candidates will sink or swim more on their own merits.