Friday’s mass shooting at an elementary school in Newtown, Conn., has already touched off a heated political debate. Opponents of stricter regulation on gun ownership have accused their adversaries of politicizing a tragedy. Advocates of more sweeping gun control measures have argued that the Connecticut shootings are a demonstration that laxer gun laws can have dire consequences. Let me sidestep the debate to pose a different question: How often are Americans talking about public policy toward guns? And what language are they using to frame their arguments?

There is, of course, no way to monitor the conversations that take place in living rooms around the country. But we can measure the frequency with which phrases related to gun policy are used by the news media.

If the news coverage is any guide, there has been a change of tone in recent years in the public conversation about guns. The two-word phrase “gun control” is being used considerably less often than it was 10 or 20 years ago. But the phrase “gun rights” is being used more often. And the Second Amendment to the United States Constitution is being invoked more frequently in the discussion.

In the chart below, I’ve tracked the number of news articles that used the terms “gun control,” “gun rights,” “gun violence” and “Second Amendment” in American newspapers, according to the database NewsLibrary.com. (Because the number of articles in the database changes over time, the figures are normalized to reflect the overall volume of database coverage in any given year, with the numbers representing how often the gun-related phrases were used per 1,000 articles on any subject.)

The usage of all four phrases, but particularly the term “gun control,” has been subject to sharp but temporary shifts based on news events. 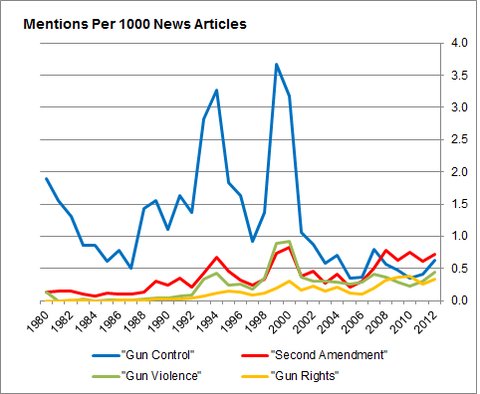 In 1993 and 1994, when Congress was debating a ban on assault weapons, the phrase “gun control” was used about three times per 1,000 news articles. Use of the term was even higher after the mass shootings in Columbine, Colo., peaking at 3.7 instances per 1,000 articles in 1999. It reached a low point in 2010, when the term “gun control” was used 0.3 times per 1,000 articles — less than one-tenth as often as in the year after the Columbine shootings.

Averaging the frequency of usage over a five-year period reduces the effect of these news-driven fluctuations and reveals a reasonably clear long-term trend. In recent years, the term “gun control” has been used only about half as often as it was in the 1980s and about one-quarter as often as in the 1990s and early 2000s. 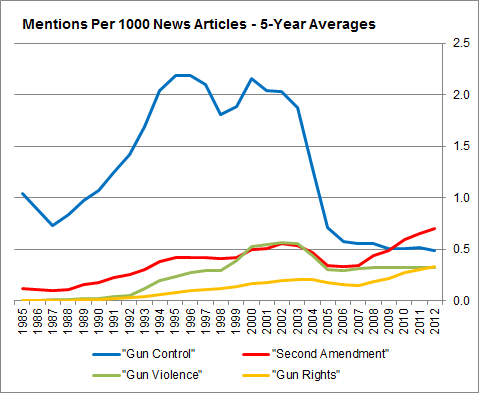 But other phrases related to gun policy have become more common in news coverage.

The change in rhetoric may reflect the increasing polarization in the debate over gun policy. “Gun control,” a relatively neutral term, has been used less and less often. But more politically charged phrases, like “gun violence” and “gun rights,” have become more common. Those who advocate greater restrictions on gun ownership may have determined that their most persuasive argument is to talk about the consequences of increased access to guns — as opposed to the weedy debate about what rights the Second Amendment may or may not convey to gun owners. For opponents of stricter gun laws, the debate has increasingly become one about Constitutional protections. Certainly, many opponents of gun control measures also argue that efforts to restrict gun ownership could backfire in various ways or will otherwise fail to reduce violence. But broadly speaking, they would prefer that the debate be about what they see as Constitutional rights, rather than the utilitarian consequences of gun control measures.

Their strategy may have been working. The polling evidence suggests that the public has gone from tending to back stricter gun control policies to a more ambiguous position in recent years. There may be some voters who think that the Constitution provides broad latitude to own and carry guns – even if the consequences can sometimes be tragic.