TAMPA, Fla. — The risk-taking Mitt Romney who picked Representative Paul D. Ryan as his running mate was not on display in Tampa on Thursday night.

Instead, in accepting the Republican nomination, Mr. Romney delivered a mostly well-written and reasonably well-delivered speech — but one that largely avoided policy substance or sweeping narrative, instead seeking to turn the election back into a referendum on President Obama.

Based on his prepared remarks, the term that Mr. Romney used most often in the speech was America, which he said 53 times.

The next most common word? Americans, which he said 35 times. Other terms that Mr. Romney used at least 10 times in the speech included jobs, better, future, business — and mom and dad. (These counts exclude common English words like the.) 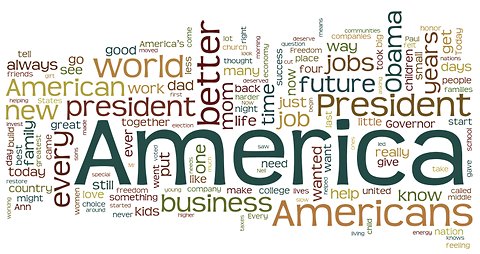 But Mr. Romney uttered the word Medicare just once. He never used the terms Social Security, welfare, or entitlement.

He never mentioned Iraq or Afghanistan, nor did he use the term terrorism, although he did refer to the mission that killed Osama bin Laden.

Mr. Romney used the term health care just once, and Obamacare only twice. He said deficit and taxes just three times each, and budget just once. He never mentioned Mr. Obama’s stimulus package, nor the federal bailouts of the financial sector and the auto industry.

Mr. Romney never used the terms gay or abortion, although he did refer to the sanctity of life and the institution of marriage. He twice referred to immigrants, but never discussed his immigration policy.

Mr. Romney only once mentioned his tenure as governor of Massachusetts, and then only to describe how he had chosen a woman as his Lieutenant Governor and appointed women to key cabinet positions.

Mr. Romney never mentioned the Olympics. He did describe his business experience at some length, although he only twice invoked the name of the company where he built his career, Bain Capital.

He even avoided some of his campaign’s favorite catchphrases, like “We Built It,” the theme of the second night of the Tampa convention.

Instead, Mr. Romney’s strategy was pretty clear. He was seeking to fulfill the role of the generic Republican — a safe and unobjectionable alternative with a nice family and a nice career – and whose main credential is that he is not Mr. Obama, the Democratic president with tepid approval ratings and middling economic numbers.

It may be a smart approach. Mr. Obama’s approval ratings remain only break-even. A clear majority of voters still think the country is on the wrong track. Somewhat contrary to the conventional wisdom, the economy does not necessarily point to a defeat for Mr. Obama based on the models that political scientists and economists use to describe it — but it is not making Mr. Obama’s re-election effort easy.

To the extent there is a metric that clearly reads negatively for Mr. Romney, it is the respective favorability ratings of the candidates. Mr. Obama’s ratings remain net-positive in most polls, while Mr. Romney’s remain net-negative.

It was in seeking to remedy that difference where Mr. Romney’s speech most broke out of its shell: first, in trying to give voters permission to vote Mr. Obama out of office even if they like him personally; and second, with a series of nostalgic and sometimes touching moments about Mr. Romney’s family.

It was a speech that Mr. Romney’s pollsters and consultants should have been pleased with, although it may have suffered from trying to check too many focus-group-approved boxes.

But most of all, and in contrast to Mr. Romney’s selection of Mr. Ryan, it was full of the choices that a candidate makes when he thinks he can win the election by running a by-the-book campaign.