We continue our Presidential Geography series, a one-by-one examination of each state’s political landscape and how it is changing. Here is Pennsylvania, the Keystone State. FiveThirtyEight spoke with Terry Madonna, a professor of public affairs and director of the Franklin & Marshall College Poll; and Marc Meredith, an assistant professor of political science at the University of Pennsylvania.

New reports indicate that the 2012 presidential campaign is coming to Pennsylvania. After a spate of advertising during the summer, Pennsylvania — in a break from tradition — has largely avoided the volume of campaign commercials that states like Ohio and Virginia have seen.

But beginning Tuesday, Restore Our Future, a “super-PAC” supporting Mitt Romney, will blanket Pennsylvania with about $2 million worth of advertisements. President Obama’s advisers greeted that news on Monday by saying that the Obama campaign would also spend advertising money in the Keystone State between now and Election Day. 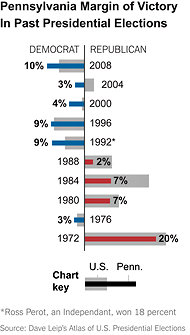 Pennsylvania has been a swing state in presidential elections since the 1950s. In the last 60 years, the candidate who carried the state has also won the national popular vote in every election but two. Over that time, Republicans have carried Pennsylvania in six elections, and Democrats have carried it in nine.

But while Pennsylvania has swung between the two parties, its relative partisan bent has remained remarkably consistent: slightly Democratic.

In fact, Pennsylvania is the only state in the nation that has been unfailingly Democratic-leaning relative to the national popular vote in every presidential election since 1950. With the exceptions of the landslide elections in 1964 and 1984, however, Pennsylvania’s leftward lean has been fairly narrow, between one and five percentage points.

The fact that Pennsylvania is just slightly left-leaning and worth 20 electoral votes, tied for the fifth largest haul with Illinois, makes the state an attractive target for Republicans. Pennsylvania is not necessary for Mitt Romney to reach 270 electoral votes, but it would provide him with more flexibility, allowing him to lose two of the three smallest battleground states — New Hampshire, Nevada and Iowa — if he carried North Carolina, Florida and Virginia.

In addition, Pennsylvania has a lot of white, working-class voters who have never been especially enamored with President Obama (Hillary Clinton bested him by 10 percentage points in Pennsylvania’s 2008 Democratic primary). Pennsylvania is also relatively old, with the fourth largest share of residents 65 years and older. The Republicans took the state’s governor’s mansion and a United States Senate seat in 2010.

But Pennsylvania may be fool’s gold for the Romney campaign. The state is relatively inelastic; it has few true swing voters, and turnout tends to be the final deciding factor. In other words, the state’s Democratic-lean isn’t severe, but it is hard to reverse. Yes, Republicans have carried the state six times in the last 15 presidential contests. But in each of those wins the Republican won nationally by at least seven percentage points, a margin that is unlikely this year no matter who wins.

It has also become slightly harder for Republican presidential candidates to put together a winning map in Pennsylvania. The last time a Republican carried the state was in 1988, when President George H. W. Bush defeated Michael Dukakis. Mr. Bush carried the Philadelphia suburbs — Bucks, Chester, Delaware and Montgomery Counties — which have often been the pivotal swing vote.

“The Republicans won elections here in the 1980s because they were winning the Philadelphia suburbs,” Mr. Madonna said.

Much of the eastern wing of the state has become more Democratic-leaning, but this has been counterbalanced somewhat by a trend toward the Republicans in western Pennsylvania. 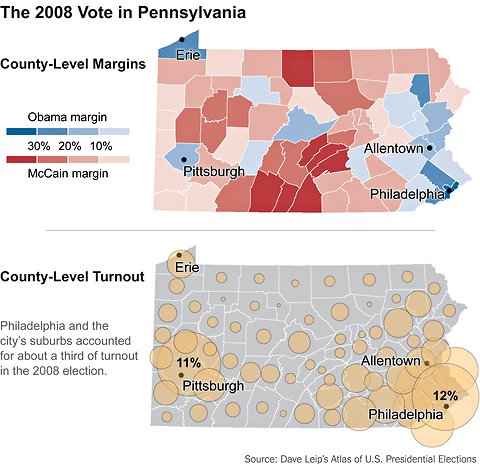 In 1992, the campaign strategist for Bill Clinton, James Carville, described Pennsylvania as Philadelphia in the east, Pittsburgh in the west and Alabama between the two cities (that’s not the exact quote, but it conveys the sentiment),

There was an element of truth to Mr. Carville’s assessment at the time; the state was bookended by two urban pockets and the rest of Pennsylvania was more rural. But in the 20 years since Mr. Carville made the statement, the state’s political landscape has shifted considerably.

Now, a better breakdown of the state is between east and west. Most of central Pennsylvania is still rural, but the eastern third of the state has become Democratic-leaning and culturally and politically Northeastern. Western Pennsylvania has a more Midwest feel and has trended toward the Republican Party.

The difference is also apparent in the suburbs and smaller cities. The Northeast corridor — stretching from Philadelphia’s suburbs in the south up through the Lehi
gh Valley and into Scranton’s Lackawanna County — has become more left-leaning over the past two decades. Part of the shift toward the Democratic Party, particularly in the Philadelphia suburbs, has been driven by women, as the Republican Party became increasingly associated with social issues like opposition to abortion and same-sex marriage. The realignment occurred throughout the Northeast and New England.

The northern part of the Northeast Corridor, in Lehigh Valley and Scranton, is more blue-collar and less left-leaning than the Philadelphia suburbs. But white college graduates and minorities — groups that skew Democratic — have increased as a share of eligible voters in the Philadelphia suburbs, the Lehigh Valley and the Harrisburg-York-Lancaster region in south-central Pennsylvania.

The south-central region, specifically York and Lancaster Counties, is the beginning of Republican territory. There’s a large Amish vote in Lancaster County, and the region tends to be more socially conservative, Mr. Meredith said.

Western Pennsylvania is culturally Midwestern, more socially conservative, and has moved towardthe Republican Party. Politically, it looks like Ohio, with a solidly but not overwhelmingly Democratic city, Pittsburgh, surrounded by heavily Republican suburbs in Westmoreland and Butler Counties. 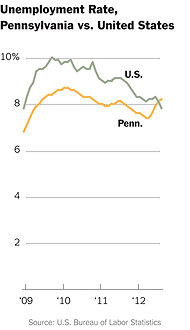 Over all, the state’s leftward lean has increased just barely because as parts of the Philadelphia suburbs moved left, the old mining and mill towns in southwestern Pennsylvania moved right. The southwest corner of the state was historically Reagan Democrat territory, Mr. Madonna said, and has become more Republican-leaning in recent years.

Bucks County is very likely to provide an early clue as to how Pennsylvania will vote. It has been an almost perfect bellwether, just one percentage point more Democratic-leaning than the state in 2008 and exactly matching the statewide vote in 2004 and 2000.

Mr. Obama is a 94 percent favorite in Pennsylvania, according to the current FiveThirtyEight forecast. The state is hard to move independent of a shift in the national political environment and is unlikely to vote Republican in an election that is so close nationally.

The new Restore Our Future ad buy notwithstanding, the Romney campaign has not seriously contested Pennsylvania, a state that is hard to move without an all-out effort. In the last 30 days, Ann Romney, Mr. Romney’s wife, campaigned once in Pittsburgh, and Mr. Romney visited Philadelphia for a fund-raiser.

The state’s partisan makeup has changed just slightly since 2008. The Democratic voter registration advantage in Pennsylvania doubled to a little over a million in the run-up to the 2008 election, Mr. Madonna said.

If Mr. Romney wins nationally by three or more percentage points, Pennsylvania could come along also. But in a closer contest, the Keystone State is likely to remain blue for Mr. Obama.