Uniquely among the 50 states, Oregon conducts the entirety of its voting by mail, which among other things can provide early clues as to what the electoral battlefield might look like elsewhere in the country.

There are many possible reasons why turnout has been sluggish in Oregon. The state, a hotly-contested battleground in 2004, has been largely ignored by the presidential candidates this year. But also, Oregon has been subject to a relatively nasty and senate race, and there is some feeling among voting officials that Oregonians are turning in their ballots later and later each year as they familiarize themselves with the early voting process (in which case, turnout should eventually catch up to its norms).

More importantly, however, the counties most culpable for the depressed turnout appear to be those that voted substantially for George W. Bush in 2004. For example, in Multnomah County, which is largely coincident with the reliably liberal Portland, turnout is down 16 percent as compared with the comparable period in 2004. Downstate in more rural Douglas County, meanwhile, where Bush received two-thirds of the vote in 2004, turnout is 27 percent off-pace.

We can look on this a bit more systematically, focusing at the 16 Oregon counties where population exceeds 50,000. In all 16 counties, turnout is behind its 2004 pace. As you can see, however, the counties experiencing the steepest declines are mostly red counties, whereas the drop-off has been milder in the blue portions of the state: 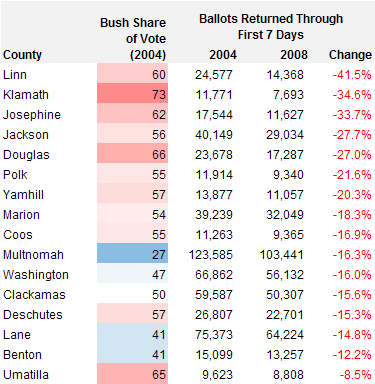 We can also look at a scatterplot of these results: 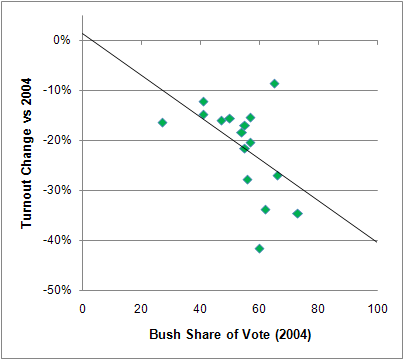 (I checked to see whether these results may have been dictated by patterns of population growth — perhaps people have been moving out of the Republican counties and into the Democratic ones. Growth, however, has been fairly uniform across Oregon over the past four years, and so this did not materially affect the results.)

One underdiscussed scenario in this election is the one wherein Republican base
turnout is relatively low. Although this has generally been an engaging election with engaging candidates, the base remains considerably less enthusiastic about John McCain than it was about George W. Bush, and McCain is also lacking Bush’s ground game. While the natural assumption is that Democrats would prefer a large turnout, what they are really aiming for is something in the medium-to-high range: one where their base turns out but the Republican one doesn’t.