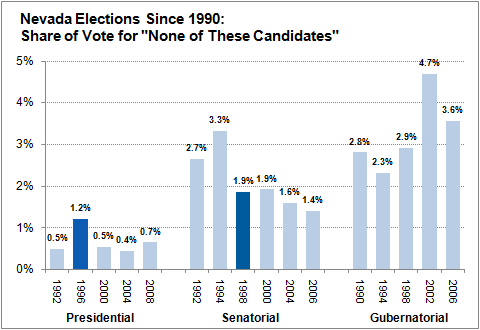 Voters in states like Illinois and North Carolina, where both the Republican and Democratic nominees for Senate are unpopular and where the number of undecided voters remains high, might lament the choice before them. Sure, if they wanted to register their displeasure with the major-party nominees, they could vote for a minor-party candidate instead (LeAlan Jones, the Green Party’s nominee in Illinois, has polled as high as 14 percent in some surveys). Or they could simply stay home.

But other voters, especially those who might consider it their patriotic duty to vote, might wish for a more affirmative way to register their displeasure with their choices. In Nevada, they have that option — the ability to cast a literal protest vote.

Since 1975, Nevadans have had the choice of voting for “None of These Candidates,” which appears as a ballot line along with the named candidates. The option has waxed and waned in popularity. But in 1976, None of These Candidates actually won the plurality of votes in the Republican primary for a United States House seat. (The nomination was awarded to the second-place finisher, Walden Earhart.) And in other cases, the ballot option has played a spoiler role: the 1.2 percent of voters who selected None of These Candidates in the 1996 presidential race was larger than the margin separating Bill Clinton and Bob Dole. And in the 1998 Senate race, the 8,125 votes for None of These Candidates easily outdistanced the 395-vote margin between Harry Reid and John Ensign, allowing Mr. Reid to be re-elected.

Mr. Reid may again be hoping to get an assist from the ballot option this year, which is unique among the 50 states. Indeed, there are those who think his entire campaign may be predicated upon it. Mr. Reid’s job approval numbers, hovering around 40 percent in most polls, would ordinarily prevent a candidate from being re-elected. But his opponent, Sharron Angle, whom the Reid campaign has tagged for her “extreme and dangerous” views, might not be elected under ordinary circumstances either. A recent poll by Mason-Dixon for The Las Vegas Review-Journal found, remarkably, that 66 percent of Ms. Angle’s voters wished that the Republican Party had nominated someone else in her place; the comparable figure for Mr. Reid is just 18 percent. (Ms. Angle received 40 percent of the vote in the Republican primary on June 8.)

“Reid’s strategy from Day 1 has been to push as many potential Angle voters into none-of-the-above as possible,” I was told by Jon Ralston, the chief political reporter for The Las Vegas Sun. “That is why they’re running the campaign they’re running.”

Mr. Ralston felt that the presence of the none-of-the-above option was unambiguously helpful to Mr. Reid, who has run an attack campaign. “Nothing that happens is going to move his number up,” he told me. “The Reid campaign knows that he hits a ceiling at a certain level.”

“Any vote not for Sharron Angle is a vote for Harry Reid,” said Mr. Stacy, who predicted that the strategy would eventually backfire. “They know that and that’s why they’re running one of the most negative campaigns in history.”

Kelly Steele, a spokesman for Mr. Reid, declined to comment on how the presence of the ballot line might be impacting Mr. Reid’s strategy.

The strategy has its limitations. “Sharron Angle could confess to being a serial killer tomorrow, and there are still 40 percent of people who would vote for her over Reid,” Mr. Ralston said. Nevertheless, if Mr. Reid were able to secure, say, 46 percent of the vote and another 8 percent were to go to None of These Candidates or to third-party candidates, that would be enough for him to be re-elected.

The strategy has its limitations. “Sharron Angle could confess to being a serial killer tomorrow, and there are still 40 percent of people who would vote for her over Reid,” Mr. Ralston said. But if Mr. Reid were able to secure, say, 46 percent of the vote and another 8 percent were to go to None of These Candidates or to third-party alternatives, that would be enough to secure re-election for him.

The Mason-Dixon poll did not show a figure that high. Instead, 4 percent of its respondents said they preferred the None of These option. (The poll gave Mr. Reid a 45-44 lead, well within its margin of error.) Other polls of the race, like those from Rasmussen Reports and Ipsos, have ignored the presence of the none-of-the-above option.

But the Mason-Dixon poll also showed that 5 percent of the electorate was undecided — and those voters could wind up selecting None of These Candidates. Mr. Ralston told me that 4 percent was on the low end of where the None of These option might finish. (Its high-water mark in recent elections came in 2002, when it received 4.7 percent of the vote in the state’s gubernatorial race.) With Ms. Angle projected to defeat Mr. Reid by just 1.3 percent in our latest forecast model, it could easily make the difference in the race.

One thing that None of These Candidates cannot do is actually win the election. Were it to take the plurality, the election would default to the second-place candidate, as it did to Mr. Earhart in 1976. Misconceptions about this contingency surface occasionally in coverage of Nevada elections, and are perhaps more widespread among voters, who might envision a symbolic empty chair in the Senate.

Still, the ballot option is part of what makes Nevada’s political culture so unique.

“Why would you bother to vote — and then not vote for a candidate?” Mr. Ralston asked. “There’s always been a kind of independent, kind of an anti-everything streak that goes with the federal government’s dominant presence here, owning 82 percent of the land, trying to stick us with things like Yucca Mountain. There’s a rebellious streak here in that way.”