We continue our Presidential Geography series, a one-by-one examination of the peculiarities that drive the politics in all 50 states and the District of Columbia. Here, a look at Missouri, the Show Me State. FiveThirtyEight spoke with David Robertson, a professor in the political science department at the University of Missouri-St. Louis, and Brian R. Calfano, an associate professor of political science at Missouri State University.

Like the Four Corners Monument — which sits at the intersection of four states — Missouri sits at a regional crossroads. 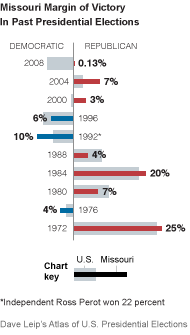 Missouri is also where the eastern United States meets the frontier West.

Missouri “has the western most industrial city and the eastern most cow town,” Mr. Robertson said.

For nearly a century of presidential elections, Missouri lived up to its regional representativeness, backing every winning presidential candidate but one from 1904 through 2004. But beginning in 1996, Missouri’s bellwether status began to show cracks. The state began to consistently vote more Republican than the nation, and in 2008, Missouri backed the Electoral College runner-up. It was the only battleground state carried by Senator John McCain.

In this year’s race, despite the slight edge that President Obama has nationally according to the current FiveThirtyEight forecast, Mitt Romney seems a solid favorite in Missouri. Instead, the state’s United States Senate contest, which was thrust into the news this week because of the Republican candidate Todd Akin’s statement on rape and abortion, may provide a better test of just how far Missouri has moved to the right, a shift caused by a number of factors. 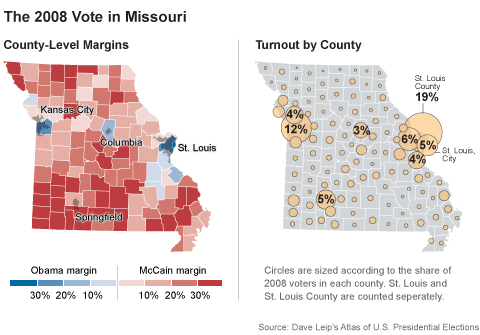 First, white, culturally conservative, working-class voters in rural Missouri, following a trend (PDF) evident in Deep South states like Georgia, began leaving the Democratic Party. The exodus was slower and more subtle in Missouri than in the Deep South, Mr. Calfano said, but it has made a difference.

In Missouri’s northern neighbor, Iowa, Democrats still win a fair number of rural counties. But in Missouri, the farming counties in the north and the relatively poor southeast, around the boot heel, now reliably vote Republican.

Rural “counties that voted for Bill Clinton probably aren’t going to vote for a Democrat for a good number of years to come,” Mr. Robertson said.

In addition to the Republican rise in rural Missouri, the state has also been moved to the right by population growth in its traditional Republican strongholds, which have been gaining population at a faster rate than Missouri’s Democratic-leaning areas. Southwestern Missouri, a longtime Republican bastion with a strong evangelical Christian culture, and the suburbs and exurbs of St. Louis, which are home to traditional, more fiscally focused Republicans, have both gained residents (PDF) over the last decade. Missouri’s main Democratic vote centers, on the other hand, grew slowly or not at all.

Kansas City and St. Louis are still overwhelmingly Democratic, with large, mostly black minority populations. But Kansas City, Missouri’s largest city, grew by just 6 percent (PDF) from 2000 to 2007, and metro St. Louis actually lost 1 percent (PDF) of its population over that period, as many of its residents left for the suburbs.

Thanks partly to retirees settling around Branson, Springfield and the Lake of the Ozarks region, southwestern Missouri grew 9 percent (PDF) from 2000 to 2007. And over the same period, as the city emptied out, the St. Louis suburbs grew by 15 percent (PDF). More votes are now cast in St. Charles County, a heavily Republican suburban and exurban county, than in the city of St. Louis. 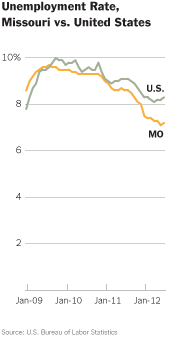 For an early clue as to how Missouri might vote on Nov. 6, look to Clay County, which includes Kansas City suburbs as well as part of the city itself. Clay County exactly matched the statewide presidential vote in 2008 and 2004. In 2000, it was off by only 2 percentage points.

The FiveThirtyEight model currently makes Mr. Romney a 79 percent favorite in Missouri, and the state is not likely to play a decisive role electorally; Missouri is not among FiveThirtyEight’s top 15 tipping point states.

Rather, it is the Senate race in Missouri that has received the bulk of political attention, even before Representative Akin — a Republican seeking to unseat the Democratic senator, Claire McCaskill — made his comments on rape and abortion.

So the Senate race may provide a good measurement of Missouri
’s current political landscape. Missouri’s shift to the right is evidenced in the viability of Mr. Akin, a deeply conservative Republican congressman, who was leading Ms. McCaskill in most polls before his comments led to calls for him to withdraw.

Since his comments, however, Mr. Akin’s advantage is more tenuous. A Public Policy Polling survey, taken after the issue became a national debate, shows the race as a tossup. Has Missouri moved far enough to the right to save Mr. Akin?

“While it’s safe to say that Missouri is likely a center-right state now,” Mr. Calfano said, “the Akin controversy might be an indicator of an upper bound on how much the state electorate will tolerate right-wing rhetoric.”

In fact, Ms. McCaskill is vulnerable not so much because she is a Democrat — Jay Nixon, Missouri’s Democratic governor is expected to win re-election relatively easily — but because she aligned herself so closely with President Obama, who is unpopular there, Mr. Calfano said.

That might be reassuring to Missouri Democrats, who can still win races if they hew to the ideological center. But the fact that Ms. McCaskill’s ties with Mr. Obama are such a liability in Missouri shows the steep hill he would have to climb to win the state’s 10 electoral votes.

“If Romney is putting money in here and competing for it in October,” Mr. Robertson said, “he’s in real big trouble.”