UPDATE (10:30 AM): Apparently, when officials in Hennepin County asked the Coleman campaign why they wanted “new” absentee ballots included in the recount, they were not able to detail why the county had rejected those ballots in error. A lot of the actions the Coleman campaign is taking right now are engineered with an eye toward raising doubt about the process to create more public sympathy in the (inevitable) event of an election contest. It may be that the extra absentee ballots they identified are something of a distraction ploy.

UPDATE (9:48 AM): The state will now begin counting the ballots; see The Uptake for live video coverage. The Supreme Court has not yet ruled on Coleman’s petition, nor was the recount team in St. Paul willing to delay the counting until it heard from the Court.

____
At 9 AM local time, Minnesota officials will begin counting more than 900 absentee ballots mutually agreed upon by the campaigns to have been wrongfully rejected — unless they don’t.

If it proceeds unimpeded, the counting of absentee ballots is likely to bolster Franken’s lead, as proportionately more rejected absentees were identified in counties won by Franken. If we simply allocate out the absentees in each county based on the proportion of the November 4th vote (.pdf) received by each candidate, that would imply 414 ballots for Franken, 383 for Coleman, and 156 for “other”, adding 31 votes to Franken’s lead.

The apparent edge for Franken comes as each campaign has had essentially a unilateral veto to prevent any particular absentee ballot from being opened and counted. Initially, based on a review of the process in Democratic stronghold St. Louis county, it appeared that the Coleman campaign was being far more aggressive than the Franken campaign in exercising its veto. Information gathered by additional counties by the Star Tribune, however, suggests that this may not be the case, and that the Franken campaign has been at least as aggressive as Coleman in exercising its veto.

The Star Tribune has reported on the disposition of absentee ballots in six counties, including the “Big 3” blue counties (Hennepin, Ramsey, St. Louis) won by substantial margins by Franken on election day, as well as three smaller counties won by Coleman. 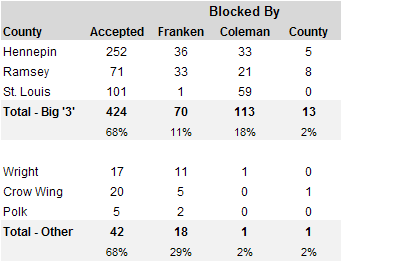 In the Big 3 counties, Coleman vetoed about 18 percent of absentee ballots, Franken 11 percent, and 2 percent were vetoed by county officials, leaving slightly less than 70 percent of the ballots to be opened and counted.

Interestingly, however, in both Ramsey and Hennepin Counties, Franken actually vetoed more ballots than Coleman. There are some number of red precincts in each of these counties, and so it is possible that the Franken vetoes came in those areas. It is also possible, however, that the Franken campaign has better information than the Coleman campaign. Although the absentee ballots are sealed, the name of the voter in question can be identified, and a campaign that had superior voter lists could in fact do some very precise cherry-picking.

In the three smaller red counties that the Star Tribune identified, Franken vetoed 28 percent of the ballots, and county officials and the Coleman campaign almost none. The overall fraction of the ballots forwarded to the state from these counties was 68 percent.

The contingency is that the Coleman campaign is once again back in court, having filed an motion for emergency order (.pdf) with the state Supreme Court on Wednesday. The motion ostensibly seeks a uniform standard for the counting of absentee ballots — something which, by all available evidence, the process that the court initially established for the counting of absentees, in giving each campaign an essentially arbitrary and unilateral veto, did a poor job of ensuring.

Coleman’s motion is fairly sneaky, however, because the relief he is specifically requesting is his motion is not to blow the whole thing up and start the absentee ballot process again over, but rather, for the inclusion of about 650 absentee ballots, mostly from heavily red counties, that have already been identified by his campaign as being wrongfully rejected, but which were not identified as such by the respective counties. The Franken campaign, for its part, identified 80-90 such ballots.

Coleman is trying to thread the needle here. On the one hand, he knows that if the state counts the absentee ballots as is, they are only likely to add to Franken’s margin. On the other hand, if the state started the process completely over, Franken might conceivably also identify hundreds more absentee ballots that he believed had been ignored by the county officials. Basically, Coleman wants the state to permit his 650 ballots to be counted — as well as Franken’s 90 — and then to freeze things in place.

Any of a variety of rulings from the court are possible; we may know the outcome within the hour.