The latest FiveThirtyEight forecast of Michigan shows a very slight lead for Rick Santorum. He leads 38.4 percent against Mitt Romney’s 36.8 percent, which translates into a 56 percent chance of winning.

It’s clear that Mr. Santorum’s position had deteriorated some from last week, when a series of polls gave him a lead of about 7 percentage points, on average. What’s less clear is whether Mr. Santorum’s standing is continuing to erode or whether it has somewhat stabilized.

A visualization of the polls could probably support either interpretation. Plot all the polls that have been conducted in Michigan over the past two weeks, draw a trend line through them and it points to a steady decline for him: 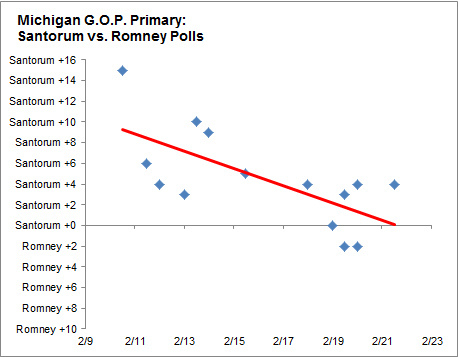 On the other hand, the most recent poll of the state from the American Research Group showed Mr. Santorum holding on to a four-point lead there. (The same polling firm had polled Michigan twice before and given Mr. Santorum leads of five and six points, so any movement they have shown toward Mr. Romney has been quite limited.)

And the polling data, taken as a whole, could just as easily be used to argue that Mr. Santorum’s numbers have steadied after he lost some ground last week: 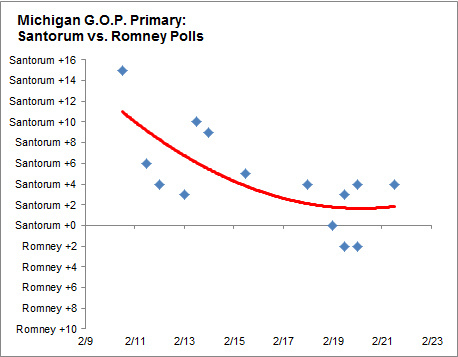 I encourage our readers to look at the FiveThirtyEight forecast as a benchmark that should be considered alongside other factors. These forecasts look at the polls and the polls alone. If there is a plausible hypothesis for why a candidate might be stronger or weaker than his polls suggest, it may well be right to account for that.

One such hypothesis in Michigan is that Mr. Romney’s advertising advantage will pay dividends in the state. This is certainly plausible, but the potential flaw is that the advantage is not all that large.

Restore Our Future, a “super PAC” that supports Mr. Romney, has spent about $2.4 million in Michigan, not much more than the $1.7 million that the Red White and Blue Fund, a pro-Santorum super PAC, has spent in the state. 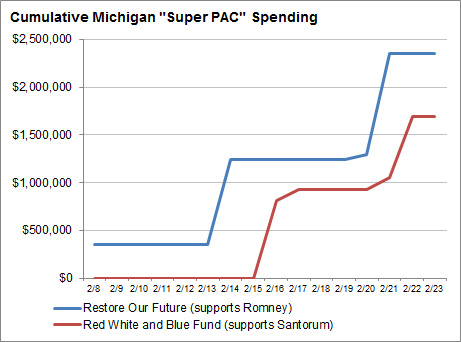 These totals do not account for monies spent by the campaigns themselves, which provide some further advantage to Mr. Romney, or spent by other super PACs. The super PAC, Priorities USA Action, which supports President Obama but has sometimes made tactical expenditures in the Republican primary, has spent about $230,000 on air time in Michigan.

All of these numbers are fairly small, however, as compared to Florida, where Restore Our Future spent $11 million — most of it blasting Newt Gingrich. And on a per-capita basis, the numbers are small as compared to Iowa. Restore Our Future spent $3.4 million in Iowa; to have the same penetration in Michigan, it would need to spend about $10 million, since its population is about three times as large.

Restore Our Future may have some fresh ammunition from last night’s debate in Mesa, Ariz., where Mr. Santorum’s performance was mediocre and where he played into some of the attack lines that Mr. Romney’s campaign and his super PAC supporters have employed in recent days. None of the polling yet accounts for the debate. Perhaps it will be enough to put Mr. Romney ahead in Michigan, especially given that there are high numbers of undecided voters in the state.

Until we see those numbers, however, I think it is premature to think of Mr. Romney as having the advantage in Michigan rather than the state being a toss-up. And should Mr. Santorum fall behind, it should be remembered that he has outperformed his Election Day polling averages in several recent states.