We continue our Presidential Geography series, a one-by-one examination of each state’s political landscape and how it’s changing. Here is Maine, the Pine Tree State. FiveThirtyEight spoke with Amy Fried, a political science professor at the University of Maine; and Ethan Strimling, who served as a Democrat in the Maine Senate for six years and now works as a political analyst for The Bangor Daily News.

The odds of an Electoral College tie are still very small, 1.3 percent according to the FiveThirtyEight forecast. But those odds have risen as Mitt Romney has narrowed President Obama’s lead. At the beginning of October the odds of a tie were 0.6 percent and several weeks before that they were 0.3 percent.

The closer the presidential race the more important each and every electoral vote becomes, including the single vote awarded to the winner of Maine’s Second Congressional District. Although Maine, over all, is reliably Democratic in presidential elections, it apportions its electoral votes by Congressional district, and the Second District is the more Republican-leaning of the two.

Can Mr. Romney carry Maine’s Second Congressional District? It’s not likely. But the political calculus in Maine is complicated by the state’s independent streak. Maine voters aren’t particularly attached to either main political party. Perhaps no state has been friendlier to third party candidates.

At the state level, Maine has had two independent governors since 1975 — James B. Longley and Angus King — and they almost elected another independent, Eliot Cutler, in 2010. This year, Maine seems poised to elect Mr. King to the Senate.

At the presidential level, no third-party candidate is especially strong this year, but Maine’s independent streak is rooted in its idiosyncrasies — neither party exactly fits the state’s political profile. Maine has a lot of swing voters, which leads to fairly schizophrenic election results. Maine is represented by two fairly liberal Democrats in the House, two moderate Republicans in the Senate and a Tea Party Republican in the governor’s mansion.

Maine has Republican characteristics: it is the whitest and oldest state in the nation. It’s also the second most rural state. At the state level, a Democrat has not won a majority in Maine since 1988, Mr. Strimling said (they have won pluralities).

On the other hand, Maine has gone blue in the last five presidential elections. It is mostly secular and relatively liberal on social issues. Maine was long a moderate Republican state, and went Democratic with the rest of New England and the Northeast as the Republican Party became more defined by cultural conservatism. Both Maine’s Republican senators, Susan Collins and Olympia Snowe, are abortion rights advocates. 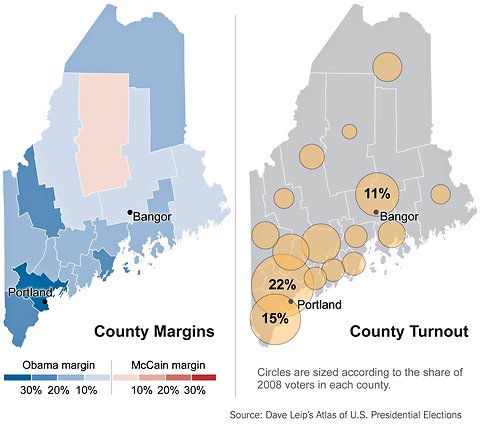 The main political divide in Maine is between the south coast and the vast interior north of Augusta, roughly mirroring the geography of the state’s two Congressional districts.

The First District is anchored by Portland, the state’s largest city. Portland is liberal, with large young, professional and gay communities.

Interior Maine is more socially conservative than the coast. In 2009, Maine voters overturned a law the legislature had passed legalizing same-sex marriage. Coastal Maine supported same-sex marriage 53 percent to 47 percent. But that was too small of a margin to overcome the interior, which opposed it, 61 percent to 39 percent. 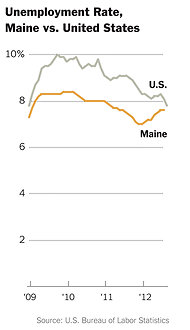 About 3,500 Republicans were added to the Second District by redistricting, and the Democratic-leaning towns of Waterville and Winslow were moved into the First District. The Second District still has Lewiston, a heavily Franco-American, Catholic and working-class town. Lewiston “has been by and large Democratic, but it can swing different ways,” Ms. Fried said.

Maine’s Second District “is a touch more Republican than it was in 2008, but the change is really very minimal,” said David Wasserman, a redistricting expert at Cook Political Report.

Oxford County, along Maine’s western border, is dotted by blue-collar mill towns like Rumford and full of Franco-American voters who skew Democratic.

Oxford County has matched the statewide vote in Maine within about one percentage point in the last three presidential elections.

Mr. Romney’s surge in national polls is as likely to manifest itself in Maine — as one of the most elastic states — as anywhere. For decades Maine was defined by moderate, Rockefeller Republicanism, and in Mr. Romney’s debate performance he tacked toward the ideological center. That move might have played particularly well with moderate Maine voters.

“If Romney does have a chance in Maine’s Second District,” Mr. Strimling said, “then Obama is in a lot of trouble.”