Every candidate has a lot on the line in the Iowa caucus on Tuesday, but perhaps none more than Gov. Rick Perry of Texas.

With a strong finish in the caucuses, Mr. Perry could re-emerge as a top-tier candidate — perhaps the best-equipped to compete with Mitt Romney, the presumed frontrunner, on a state-by-state basis. With a poor finish, Mr. Perry might face pressure to drop out of the race as Senator Phil Gramm of Texas did in 1996 after a disappointing fifth place finish in the Iowa caucuses.

Mr. Perry has been consistently projected to win about 12 percent of the vote in our polling-based forecasts of the caucuses, without having much sustained movement upward or downward.

But for those looking for a glimmer of hope in Mr. Perry’s numbers, I was able to identify one. Mr. Perry was fairly often named as a second-place choice in a Des Moines Register poll released on Saturday. His campaign may have some hope of converting those second-place votes into first-place votes because it has a large number of precinct leaders, who under Iowa caucus rules are allowed to make a speech in favor of their candidate before the voting takes place.

Still, this is not the situation — hoping, most likely, for a third-place finish in Iowa that would allow him to continue onto South Carolina — that a candidate with Mr. Perry’s formidable resume would have expected to find himself in.

The internals of the new Des Moines Register poll help to explain why Mr. Perry has struggled to gain traction despite an intensive focus on Iowa in recent weeks and a large advertising budget. The poll asked caucusgoers to identify which candidate they favored in nine categories, ranging from being the most consistent to the most likely to defeat President Obama.

Almost all the candidates had one or another of these factors working in their favor. Newt Gingrich, the former House speaker, was named the most knowledgeable, for instance, Mr. Romney the most electable, and Representative Ron Paul of Texas the most likely to reduce the size of government. Representative Michele Bachmann of Minnesota and Rick Santorum, the former senator of Pennsylvania, rated well on the attribute of relating to ordinary Iowans.

Mr. Perry was the exception; he did not lead the field in any of the nine categories. For all his swagger, in other words, Mr. Perry is failing to stand out from the crowd. Despite spending $4.3 million in advertising, his brand has become poorly differentiated from the other Republican contenders. 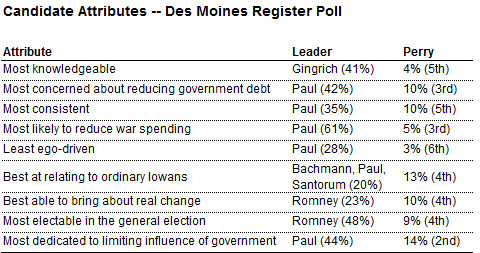 This did not seem a likely predicament for Mr. Perry when he launched his campaign in August and delivered a vigorous announcement speech that overshadowed Mrs. Bachmann’s victory in the Ames, Iowa, straw poll.

Mr. Perry seemed to have two clear advantages over the rest of the field: his genuinely strong jobs record in Texas, and his engaged and confrontational style, which seemed to suit the Republican mood and draw a stark contrast to the more cerebral and even-tempered Mr. Romney.

Arguably, the jobs issue is less salient in Iowa, where the unemployment rate is a relatively low 5.7 percent. Still, most Iowans have told pollsters they are more concerned about the economy than social issues.

Mr. Perry has instead moved in the opposite direction. On Dec. 6, his campaign released a much-parodied ad in which he said that “there’s something wrong with this country when gays can serve openly in the military but our kids can’t openly celebrate Christmas.”

The commercial, and a later speech in December when Mr. Perry shifted his position on abortion to say he opposed it even in cases of rape and incest, seemed like blatant attempts to pander to the evangelical community in Iowa. The most recent Public Policy Polling survey in Iowa, however, finds that Mr. Perry receives only 12 percent of the evangelical vote, putting him in sixth place among the Republican candidates. Voters who prioritize social issues may instead prefer candidates like Mr. Santorum and Mrs. Bachmann who have emphasized them all along and who do not speak about them in what can seem like an opportunistic way.

Mere days ago, indeed, Mr. Perry was roughly tied with Mr. Santorum in the polls, but now Mr. Santorum has zoomed ahead and is a plausible come-from-behind winner of the caucuses.

Mr. Perry’s campaign has responded with commercials that rip Mr. Santorum for the earmarks he procured while a senator. His campaign has had less to say, however, about Mitt Romney, the candidate who leads most recent polls and whom Mr. Perry had once seemed to enjoy confronting in debates.

In turning his attention to Mr. Santorum and to socially conservative voters, Mr. Perry may have helped to entrench his status as a second-tier candidate, competing for a fraction of the electorate that can help a candidate to win Iowa but becomes less relevant outside of it. By contrast, Mr. Perry’s peak in national polls in September had been associated with a low ebb for Mr. Romney, suggesting that at least some voters were choosing between them as nationally viable front-runners.

Mr. Perry’s hope, of course, may have been that candidates like Mr. Santorum and Mrs. Bachmann would remove themselves from the field after Iowa and New Hampshire, at which point he might consolidate the conservative vote. That now looks unlikely in Mr. Santorum’s case, however. Meanwhile, Mr. Perry is polling poorly in South Carolina, a state that once figured to be a strength for his campaign.

If Mr. Perry has a strong showing in Iowa, he will have plenty of time to reverse his momentum. (Mr. Perry is planning to bypass New Hampshire regardless of his finish in Iowa, instead going directly to South Carolina.) Otherwise his campaign, which began with a bang, is in danger of dying with a whimper.