In the Iowa caucus, expectations have historically mattered almost as much as actual results. Candidates like Pat Buchanan and Gary Hart who do better than the polls indicated have often received a big lift going into other states, even if they did not win Iowa.

With this year’s pre-caucus polls already having been volatile and a large chunk of Iowans still saying they are undecided, it is worth asking whether there are any patterns in the candidates who have tended to beat the polls in the past.

There has been one such pattern on the Republican side. It is one that might worry more moderate candidates like Mitt Romney while giving cheer to others like Michele Bachmann and Rick Santorum: Historically, most of the candidates who have beaten the polls by a wide margin on caucus night have been staunchly conservative. 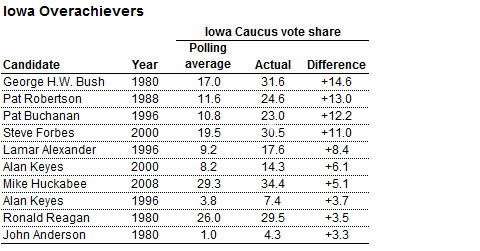 The big overachievers include Pat Robertson in 1988, Pat Buchanan in 1996, Mike Huckabee in 2008, and Alan Keyes on two occasions. Steve Forbes did much better than his polls in 2000, after he had had shifted to the right on social issues, hoping to cultivate the evangelical vote.

By contrast, most of the candidates who underachieved their polls were moderates compared with the other Republicans in their field, had the strong backing of the party establishment, or both. 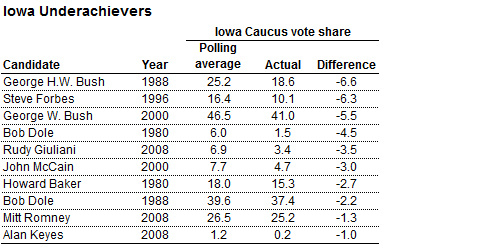 Like most other patterns derived from small sample sizes – there have been only five competitive Republican caucuses since 1980 – it is entirely possible that this one is just a coincidence. But the pattern has grown stronger in recent years, as the evangelical vote has come to dominate the caucuses.

Some of the examples of moderates who underperformed in Iowa are obvious, like John McCain in 2000 and Rudolph W. Giuliani in 2008. The relatively moderate Bob Dole did fairly well in Iowa. But he nevertheless underachieved his polls on multiple occasions, failing to get much momentum from the state and to translate his caucus wins in 1988 and 1996 into success in New Hampshire.

Meanwhile, although Mr. Forbes’s newfound social conservatism worked wonders for him in 2000, he did poorly relative to expectations in 1996, when he ran a one-issue campaign centered on the flat tax. Even George W. Bush, who ran as much more of a moderate in 2000 than his later reputation might suggest, underachieved his polls in Iowa.

The elder George Bush is actually the biggest underachiever — as well as the biggest exception to the pattern. In 1988, as the sitting Vice President and establishment-backed front-runner, he finished in a disappointing third place, well short of what pre-caucus polls suggested.

The exception came in 1980, when despite running as a moderate, he received 32 percent of the vote on election night, surprising pollsters and beating Ronald Reagan. Mr. Bush’s success came partly because he was willing to spend much more time in Iowa than the other candidates.

It is also possible to test this question more objectively. Adam Bonica, a political scientist at Stanford, has developed estimates of candidate ideology dating back to 1980 based on the apparent ideology of a candidate’s donors. Using Mr. Bonica’s conservatism scores in conjunction with the polling average produces a statistically significant result: the more conservative the Republican, the more he has tended to beat his polls at the caucuses.

The most conservative candidates this year, according to Mr. Bonica’s method, are Michele Bachmann and Ron Paul. Although Mr. Paul is extremely hard to rate on any one-dimensional scale, because of his libertarian ideology, Mrs. Bachmann has sterling conservative credentials. If she were to improve upon her polls by several points while Mr. Romney simultaneously did several points worse, she could even beat him.

Such an outcome would almost certainly be declared an upset, but it would not be all that surprising based on historical precedent. This may help to explain why Mr. Romney’s campaign has continued to take an aggressive posture in Iowa even as his polling has improved.

As a relatively moderate and establishment-backed front-runner, and one who has spent relatively little time in Iowa, he has all the markings of a candidate who has come up with a disappointing result on caucus night. He has to hope that, like the elder Mr. Bush in 1980, he will prove to be an exception to the rule.

If nothing else, these historical trends are a reminder that polls – which dominate the public discussion and media coverage of campaigns – are a pretty rough guide in primaries and caucuses. Candidates’ actual vote totals often fall well outside the polls’ reported margins of error.

The problem may be that turnout is low in Iowa and difficult to forecast: perhaps one-quarter or one-fifth of 610,000 Iowa’s registered Republicans will actually attend their caucuses. Historically, more so than the pollsters have realized, it has been evangelicals and other strongly conservative voters who have been most willing to brave the cold and cast their votes.