Today we continue our Presidential Geography series, a one-by-one examination of the peculiarities that drive the politics in all 50 states and the District of Columbia. Today’s stop: South Carolina, the Palmetto State. FiveThirtyEight spoke with Prof. Robert Oldendick and Associate Prof. Mark Tompkins, both of the political science department at the University of South Carolina.

Needless to say, many states have had a substantial change of heart in the past 20 or 30 years. 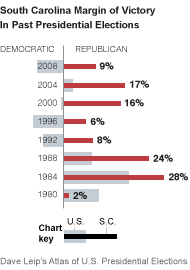 South Carolina has not. For almost three decades, the Palmetto State has been nothing if not consistent. Relative to the national popular vote, the Republican presidential candidate has carried South Carolina — starting in 1984 — by 10 percentage points, then 16, 14, 15, 16, 15 and 16 in 2008. And all signs point to Mitt Romney winning South Carolina by a double-digit margin this year.

While migrations and immigrations, policy proposals and personalities have come and gone, and shifted the politics of many states, South Carolina has held firm, a majority Republican state with a sizable Democratic minority.

But it is not as if the Palmetto State hasn’t undergone any demographic changes. Rather, those changes have tended to balance out, leaving no net effect on the state’s political leanings, Mr. Tompkins said. Furthermore, South Carolina has few real swing voters. It was the 3rd least elastic state; its partisan voting blocs are remarkably stable.

In presidential elections, the state is consistently about 55 to 60 percent Republican, comprised of social conservatives in the Upstate and traditional suburban conservatives in the Lowcountry, and 40 to 45 percent Democratic, consisting of rural and urban African-Americans and urban whites in the Midlands and Charleston. 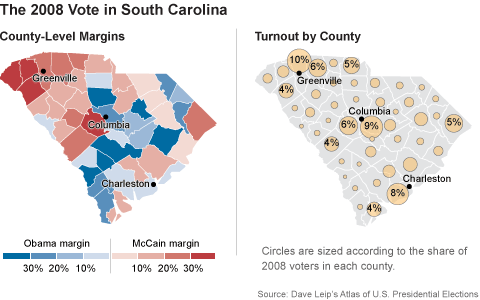 From 2000 to 2010, no state’s Hispanic population grew faster than South Carolina’s, more than doubling to 5 percent. That’s not a huge share of the state, but, because Hispanic voters tend to favor Democrats by large margins, one might expect the state to shift at least slightly to the left.

At the same time, however, a Republican-friendly demographic has also been moving into the state. Affluent retirees, overwhelmingly white, have been moving to South Carolina in large numbers, particularly in communities on the coast.

And Hispanics tend to vote at much lower rates than the Republican-leaning retirees, “so what at first glance appears to be an advantage for the Democrats is largely negated,” Mr. Oldendick said.

Upstate South Carolina, around Greenville, is heavily Republican. A large share of voters in Upstate are Evangelical Christians, and the Tea Party is popular there. The region is still one of the nation’s largest textile producers, but the industry is a shadow of its former self. Automobile companies, like BMW, have moved in to fill part of the gap.

The only area of the state dominated by Democrats is the Midlands, where African-Americans are a majority in about a dozen rural counties and the largest population center in the region, Columbia, is home to the main University of South Carolina campus. Moderate, well-educated voters in Richland County, where Columbia is, make it a reliable source of Democratic votes.

The Lowcountry includes Charleston, where the Port Charleston Harbor is a major engine of the state’s economy. The Charleston area also has a strong libertarian streak, Mr. Tompkins said. Farther north, retirees have flocked to beach communities along the Grand Strand, where tourists also provide a steady boost to the economy in destinations like Myrtle Beach. 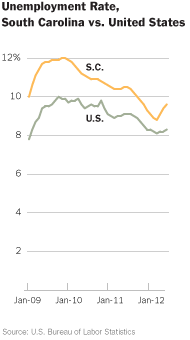 Fast-growing Beaufort County includes Marine Corps Air Station Beaufort, the resort town of Hilton Head and the perfectly preserved architecture of Beaufort itself. Naturally, the military and tourism are two of Beaufort County’s most significant industries.

In the last three elections, Beaufort County has been a slightly Republican-leaning bellwether of South Carolina’s statewide vote, supporting the Republican presidential candidate in each election by one or two percentage points more than the state as a whole.

The FiveThirtyEight model currently makes Mr. Romney a 99 percent favorite in South Carolina, projecting a 55 to 44 percent win over President Obama. That isn’t far off from the final vote in 2008, when Sen. John McCain carried the state 54 to 45 percent over Mr. Obama.

Those margins might not seem that wide for such a consistently red state. In 2008, Mr. McCain carried other states by much larger margins.

But it is likely a mistake to misinterpret the relative narrowness of the Republican advantage in South Carolina as a sign of potential competitiveness, both Mr. Oldendick and Mr. Tompkins said.

South Carolina isn’t experiencing the demographic and economic forces that have made Virginia and North Carolina, formerly reliably red states, into presidential battlegrounds, Mr. Tompkins said. And the demographic groups that dominate the state — such as evangelicals and African-Americans — tend to have strong allegiances to one party or the other, leaving few persuadable voters.

“I’m personally doubtful that the Democrats will compete successfully in a presidential contest in the near future,” Mr. Tompkins said.

Or, from a South Carolina Democrat’s perspective, the slightly more pessimistic view:

“I think it is very unlikely that we will see much change in South Carolina voting at the presidential level,” Mr. Oldendick said, adding, “or any other level for that matter.”