Two Republican senators reached a deal this week on a plan to strengthen the border security provisions of the immigration overhaul currently working its way through the Senate. Many G.O.P. legislators have said that tough border security measures are needed to garner enough Republican votes to pass a bill that also provides a path to citizenship for immigrants living in the United States illegally.

But while Republicans in Congress may be focused on border security, public opinion surveys suggest that the best way to get Republican voters on board may be to emphasize the difficulty of the path itself.

Polls that describe the many requirements immigrants may have to meet to gain citizenship — for example, paying fines and back taxes, undergoing a criminal background check and waiting many years — have found much higher Republican support than polls that do not mention the obstacles to citizenship or refer generally to “requirements.”

Among Democrats and independents, too, more requirements generally translate into more support, but the difference is not nearly as great. 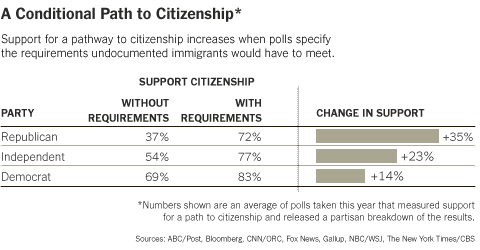 Republican support nearly doubles, on average, in polls that specify the citizenship requirements compared with those that do not.

In surveys that do not specify more than one requirement, just 37 percent of Republicans support a path to citizenship. (Most polls have released partisan breakdowns, but those that have not are not included in the average.) In contrast, 72 percent of G.O.P. respondents favored citizenship in polls that laid out the obstacles immigrants here illegally would have to navigate. In other words, Republican support increased by an average of 35 percent.

As a result, in surveys that spell out the criteria immigrants may have to meet to become citizens, there is little difference in support among the three major partisan groups. They are within 11 percentage points of one another: 72 percent of Republicans support a path to citizenship with multiple, specified requirements, as do 77 percent of independents and 83 percent of Democrats.

It is less clear that linking citizenship to border control would have the same effect on Republican opinion.

In a National Journal/United Technologies survey also released this week, only a bare majority of Republican respondents supported linking border security to citizenship: 52 percent agreed that immigrants here illegally “should not be placed on a path to citizenship until the government meets high standards for securing our borders against further illegal immigration,” and 39 percent were against linking the two.

The most recent push to pass immigration reform, during the George W. Bush administration, was scuttled in large part because grass-roots conservatives rose up against the effort. That has not yet happened this time around, although there are those who think it will.

So far, immigration reform advocates have highlighted the bill’s border security measures. But, if the polls are right, Democrats and pro-reform Republicans might do better in limiting a conservative backlash by emphasizing that the path to citizenship is a long and winding one.