Markets were down sharply on Friday after Speaker John A. Boehner’s tax plan failed to reach a vote in the House on Thursday evening. No Democrats were prepared to support the bill, and Mr. Boehner told reporters that his plan also lacked sufficient votes among Republicans.

A variety of smart political observers have suggested that the markets are misreading the situation. Instead, they say, the failure of Mr. Boehner’s bill makes a deal to avert the so-called fiscal cliff more likely because it has now become clear that any deal will need to rely upon the support of at least some Democrats, which could ease passage through the Democratic-controlled Senate.

Perhaps this is correct. Mr. Boehner has said that the White House and Senator Harry Reid, the majority leader, will now have to take the lead in negotiations. The chance that a fiscal deal will be secured on terms that Democrats find favorable may have increased.

But the chance that there will not be a deal at all may also have increased, or at least not one before protracted negotiations that could harm the economy. The difficulty is in finding any winning coalition of votes in the House of Representatives.

In the diagram below, I’ve charted the major coalitions in the incoming 113th Congress, which will convene on Jan. 3. The new House of Representatives will have 233 Republicans and 200 Democrats. Two seats remain vacant, which means that 217 of 433 votes will be required to pass a bill. 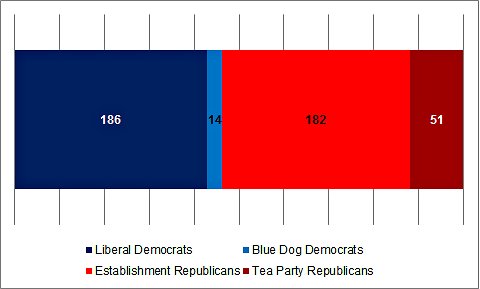 Of the 233 Republicans, 51 will be members of the Tea Party Caucus, give or take a few depending on which first-term members of Congress join the coalition. The other 182 are what I will call Establishment Republicans.

As Keith T. Poole of the Voteview blog points out, the Tea Party Caucus wasn’t solely responsible for Mr. Boehner’s failure to pass his bill. A significant number of Tea Party Caucus members were thought to support his plan, while some of the opposition came from representatives who do not formally associate themselves with the Tea Party.

Nonetheless, it seems clear that Mr. Boehner lacks the confidence of roughly three dozen Republican members of the House, and possibly more. Erick Erickson, of the blog RedState, identified 34 Republicans who he said opposed Mr. Boehner’s bill and another 12 whom he identified as being on the fence.

Say that Mr. Boehner cannot count on the support of 34 of his Republicans when it comes to passing major fiscal policy legislation. That means he would need to identify 18 Democrats who would vote along with the Republicans who remained with him.

Here’s the problem: it might be hard to round up those 18 Democrats.

The reason is that most of the Democrats who remain in the House are quite liberal.

In fact, the once-powerful Blue Dog Caucus, a coalition of moderate Democrats, will have only 14 members in the new Congress. The centrist Democrats who once filled its ranks fared very poorly in the 2010 midterm elections, while others retired or were harmed by redistricting or by primary battles. Although Republicans have moved more to the right than Democrats have moved to the left in recent years, according to measures like those developed by Mr. Poole, the attrition in the Democratic Party has nevertheless contributed to moving the two parties even further apart.

What that means is that if Mr. Boehner has a significant number of Republican defections, as he did on Thursday night, he will need to win the support of at least some liberal Democrats. And a bill that wins the support of some liberal Democrats will be an even harder sell to Mr. Boehner’s Republicans. For each vote that he picks up from the left, he could risk losing another from his right flank.

Perhaps cooler heads will prevail in these negotiations. But a majority of the incoming House – 237 of 433 members – will be either Tea Party Republicans or liberal Democrats, leaving only 196 members who are either Establishment Republicans or Blue Dog Democrats and who might form a functional center-right coalition.

Moreover, the House is likely to engage in repeated battles over fiscal policy during the next two years: not just the over the fiscal cliff, but also over the debt ceiling, annual budgeting plans and whatever stabilization measures might be proposed in the event of another economic downturn.

If Mr. Boehner is having as much trouble whipping votes as he did on Thursday night, reducing the pool from which he might be able to draw together a compromise, this arithmetic problem could turn out to be intractable at some point.