Rick Santorum’s victory in the Kansas caucuses on Saturday wasn’t much of a surprise, but his margin was toward the high end of expectations as he took 51 percent of the vote to Mitt Romney’s 21 percent. It was the largest margin of defeat for Mr. Romney in caucus or primary to date, although he lost the “beauty contest” primary in neighboring Missouri by almost as large a margin.

Mr. Santorum’s success in Kansas was also geographically sweeping. He took all four Congressional districts and all but one small county. Under Kansas’ delegate allocation rules, he should receive about 33 delegates to Mr. Romney’s 7 once the results are verified.

It had seemed that Mr. Romney might be competitive in Johnson County, the anchor of Kansas’ Third Congressional District, home to well-off and socially moderate suburbs like Overland Park and Shawnee. Indeed, Johnson was among Mr. Romney’s best counties in the state — but he still got only 30 percent of the vote there, finishing well behind Mr. Santorum.

Kansas thus continued a pattern in which geography has been the most reliable way to predict the state-by-state results. Mr. Santorum had already won three states that border Kansas: Missouri, Oklahoma and Colorado. And the eight states that Mr. Santorum has carried are contiguous. 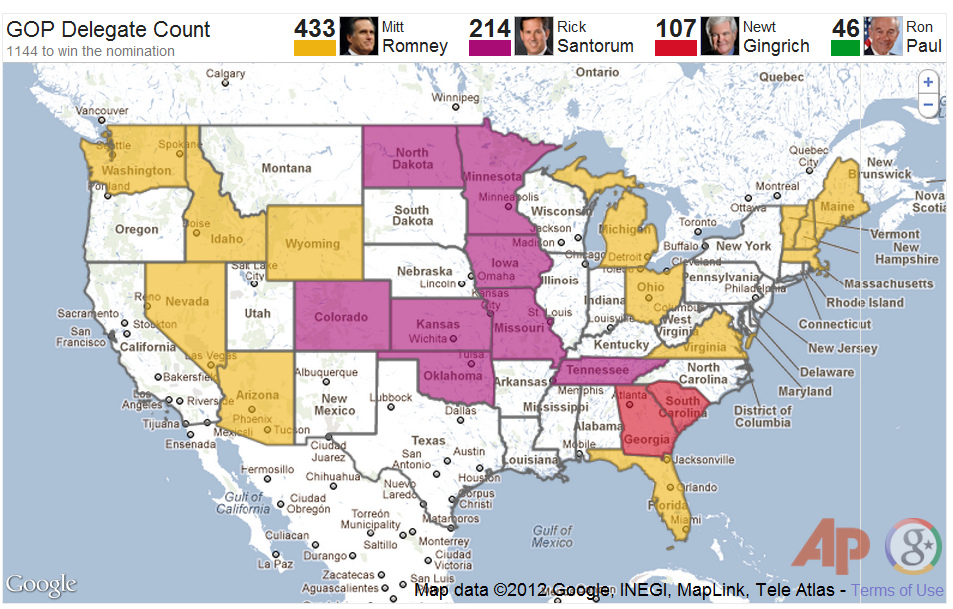 These geographic trends seem to be more powerful than differences in demographics alone. Compare Mr. Romney’s 30 percent performance in Johnson County, for instance, to that of other urban and suburban counties that have similar demographics but are elsewhere in the country: 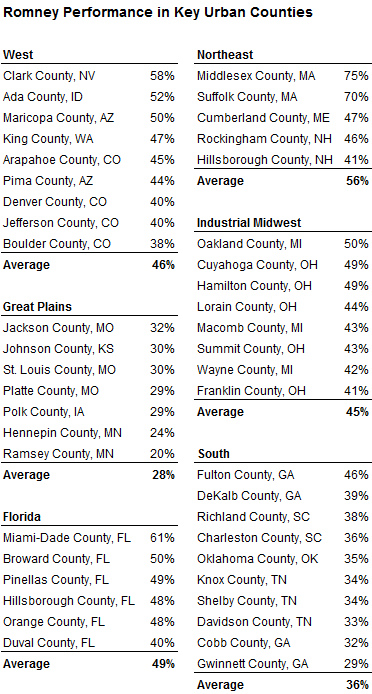 But as in Johnson County, Mr. Romney has struggled in the urban centers of Great Plains states. He took only 24 percent of the vote in Minneapolis’s Hennepin County, and 29 percent in Polk County, the most populous in Iowa. And outside of Florida, he has struggled in the South, getting about 35 percent of the vote in metropolitan Atlanta, Nashville, Oklahoma City and Columbia, S.C.

In almost all cases, Mr. Romney’s results in urban and suburban counties have been better than in rural portions of the same states. But the urban-rural split seems to be relative to a different baseline in each region. He performed better in the most rural parts of Arizona, for instance, than he did the most well-off suburban counties in Kansas, Missouri and Minnesota.

The geographic trends seem to outweigh this, however. In the Northeast, Mr. Romney has carried even very conservative voters by an average of 20 points so far. But in the South, excluding Florida, he has only tied his opponents even among moderate and liberal Republicans.

This kind of pattern can create problems for anyone seeking to make predictions about the states based solely on their demographics. When I conducted a regression analysis to help forecast the outcome of future states for purposes of analyzing the delegate math in each one, I found that including variables to indicate the region of the state added significantly to the explanatory power of the model, even after variables like the conservatism of a state’s voters or its religious demographics were accounted for.

In the Republican primaries, if geography is destiny as much as demography is, then Alabama, which votes on Tuesday, could be an especially interesting test case. It borders Tennessee, Georgia and Florida, which are states carried by Mr. Santorum, Newt Gingrich and Mr. Romney respectively (although Mr. Romney lost most counties in the Florida panhandle region, which borders Alabama). Perhaps fittingly, polls show a virtual three-way tie in Alabama thus far.