We continue our Presidential Geography series, a one-by-one examination of the peculiarities that drive the politics in all 50 states and the District of Columbia. Here, a look at Florida, the Sunshine State. FiveThirtyEight spoke with Lance deHaven-Smith, a professor of public administration and policy at Florida State University, and Daniel A. Smith, a professor in political science at the University of Florida. 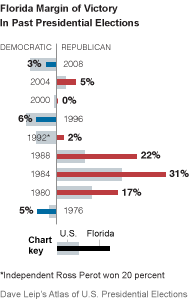 In many ways, the Tampa area was the weakest link in the regional coalition that Barack Obama built to win Florida in 2008. The Tampa-St. Petersburg media market is home to a quarter of Florida’s registered Republicans, and Mr. Obama carried Hillsborough and Pinellas Counties — home to Tampa and St. Petersburg — by a smaller margin than Florida’s other major population centers. If Mitt Romney wants to win the state, it represents the most attractive target.

And winning Florida is a must for Mr. Romney. Based on the simulations that the FiveThirtyEight forecast model ran on Tuesday, Mr. Romney has only a 0.3 percent chance of winning the election if he loses the state.

It is hard to conceive of Mr. Romney winning the election but losing Florida because Florida is an ever-so-slightly Republican-leaning state. If he loses it, he’s probably having trouble elsewhere on the map as well. It’s quite unlikely that Mr. Romney loses Florida but wins a state like Michigan or Pennsylvania, for instance.

Still, the state is idiosyncratic enough that it could behave differently, moving in one direction while the other swing states move in another. Each party begins with some strengths and weaknesses in the state, and regions that are vital to its path to victory there. 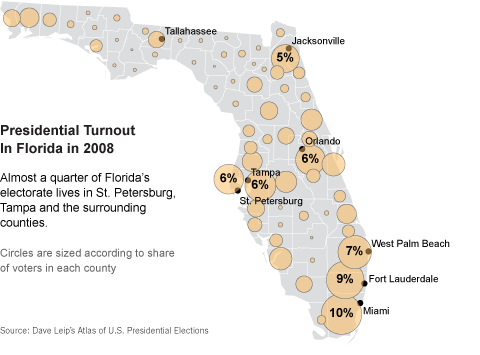 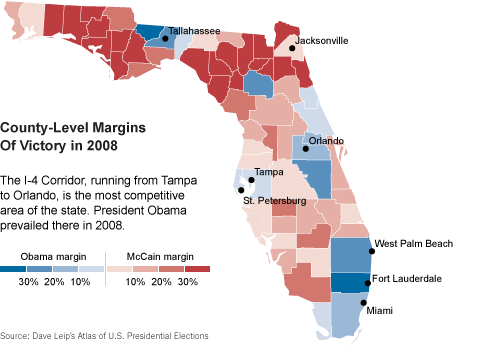 Broward County, in particular, is critical to Democratic margins in Florida. While Miami-Dade County is reliably Democratic, its large Cuban-American population leans Republican and keeps the county from tilting all the way to the left. Miami-Dade County is home to 58 percent of Florida’s Hispanic Republicans and 34 percent of Hispanic Democrats. Without Broward County, however, Mr. Obama would have lost Florida in 2008; his statewide margin of victory (204,577 votes) was less than his margin in Broward (252,948 votes).

Democratic support has grown more recently in Orlando, a historically Republican city and the second main population center in the Interstate 4 corridor (along with Tampa). Orlando’s Orange County was just marginally Democratic in the 2000 and 2004 presidential elections. Then — partly because of an influx of non-Cuban Hispanics — Mr. Obama carried Orange County fairly easily in 2008, and the county itself is probably out of reach for Republicans now.

“It’s really tipping the state,” Mr. deHaven-Smith said. A potential dream scenario for Democrats — and a nightmare for Republicans — is if the demographic shifts in this region are enough to shift Florida from being slightly Republican-leaning to strictly neutral, or slightly Democratic-leaning instead.

The Jacksonville area has also moved to the left, although from a more conservative starting point and for slightly different reasons. That region, which has a significant military presence, is known for its culturally moderate, business-oriented Republicans, Mr. Smith said. Former President George W. Bush won Jacksonville’s Duval County with 58 percent of the vote in both 2000 and 2004. 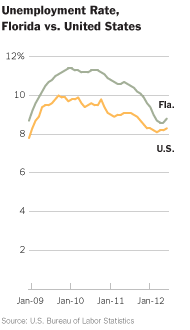 Those same voters are still a majority, but just barely. Duval County has become more competitive as its African-American population has grown and as black turnout has increased, Mr. deHaven-Smith said. In 2008, Mr. Obama lost Duval by just one percentage point.

West of Jacksonville — past liberal islands around the state capital, Tallahassee, and the home of the University of Florida, Gainesville — Florida begins to look and feel like its northern neighbors, Georgia and Alabama. Affectionately known as the “Redneck Riviera“, the Florida Panhandle’s beautiful beaches are dotted by resorts and military installations. The area is culturally conservative and heavily Republican, but most of the counties in the Panhandle are sparsely populated.

The last predominately Republican area of the state is southwest Florida, where a string of retirement communities stretch along the coast, giving the G.O.P. a solid base of reliable voters. More affluent retirees tend to live in Collier County, while more working-class retirees have settled in Charlotte County, Mr. deHaven-Smith said. But both communities, like Fort Myers’s Lee County and most of the rest of Florida, were hit hard by the collapse of the housing sector.

That leaves the Tampa area as neutral — but critical — turf. Of course, both Democrats and Republicans can do a little worse in one region if they do a little better in another. But in general, carrying Tampa has been the final step for statewide winners. In every election since 1960 the presidential candidate who carried Florida
has also carried Tampa’s Hillsborough County.

Economically and ethnically, Hillsborough County is a fairly good microcosm of America. The county’s Democratic core in Tampa is balanced by the city’s Republican suburbs, and recent Hispanic growth has been accompanied by exurban growth, maintaining the county’s partisan equilibrium.

Florida is the closest state according to the FiveThirtyEight forecast; Mr. Obama was a nominal 52 percent favorite there as of Tuesday, but it has flipped back and forth between the candidates many times.

Still, and particularly so long as Mr. Obama seems to hold a clearer advantage in other swing states like Ohio, it is much easier to conceive of Mr. Obama winning the election without Florida than Mr. Romney. For that reason, it represents more of an offensive state for him.

For over a year, Mr. Obama has been building an extensive infrastructure in the state, despite the state’s reputation for being dominated by the advertising “air war.” The Obama campaign has opened 73 field offices in Florida compared with the Romney campaign’s 28.

In Mr. Romney’s favor is Florida’s still struggling economy. In particular, the state’s housing sector continues to flounder. Apart from the general distaste that a poor economy can cultivate for an incumbent, the Obama campaign’s efforts to reach out to voters have been complicated by Florida’s many home foreclosures, which have uprooted thousands and rendered voter lists inaccurate.

Ultimately, the calculus for undecided Tampa voters is the same for Florida voters, which is much the same as it is for undecided voters elsewhere: how much is the president to blame for the tepid economic recovery, in Florida and the nation? And is Mr. Romney a suitable alternative? The way voters in Tampa answer those questions could help determine the next president.