Why are we likely to hear so much about EFCA — the Employee Free Choice Act — a seemingly obscure piece of legislation that amends the conditions for the formation of unions? This is why: 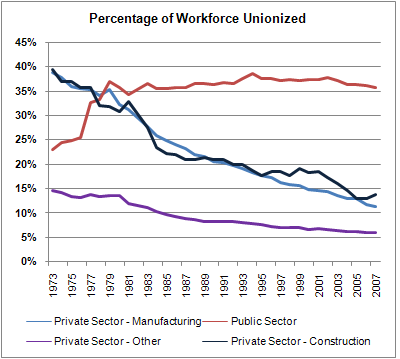 The percentage of the workforce participating in unions has been in a steady decline for at least 35 years. It might be tempting to attribute this to the more broad-based decline of the American manufacturing sector in general in the epoch of global commerce — and this is certainly a part of the story. In 1973, about 27 percent of the American workforce was engaged in manufacturing; as of last year, that number was down to 12 percent.

Even controlling for that, however, the unionization of the private sector has been in a precipitous decline. The percentage of manufacturing employees participating in unions dropped from 38.9 percent in 1973 to 11.3 percent in 2007. A similar tend has manifested itself in the construction sector, an industry which (until very recently) had been doing quite well for itself: just 13.9 percent of workers engaged in construction and mining are unionized now, as compared with 39.5 percent in 1973.

Public sector unions, by contrast, have had considerably more success, gaining membership throughout the 1970s and then holding in what amounts to a steady state ever since. Unions have also had some progress in hedging their decline in the service sector.

But the private sector unions, particularly in the manufacturing trades, may see this as an existential crisis. Unions are by definition about strength in numbers, and the unions worry about dropping below some critical mass beyond which they have no way to reverse their decline, and are no longer key players on the American political scene. EFCA, which makes it considerably easier to form unions (too easy, its opponents say) might be the way — perhaps the only way — for them to stem that decline.

And here we run into another sort of numbers game: the margin of error between the passage and failure of the bill in the Senate is going to be very, very thin.

In 2007, 51 senators voted for cloture on EFCA — all Democrats except Tim Johnson, who was still absent from the Senate at that time, plus a lone Republican, Pennsylvania’s Arlen Specter. That left the Democrats 9 votes short of passage — votes which, in theory, they might now have. Johnson is back in the Senate, and they have picked up seats in Alaska, Colorado, New Hampshire, New Mexico, North Carolina, Oregon, Virginia, and are on the verge of doing so in Minnesota. That would give them 60 votes and 60 exactly, if and when replacement senators are appointed in Illinois, Colorado and New York.

Except that, Democrats are in danger of losing at least one vote: Arkansas’ Blanche Lincoln, who has suggested that she is “undecided” on the measure. Arkansas has very low union participation: between its manufacturing and construction sectors, 6.0 percent of its workforce participates in unions, about half the national average. 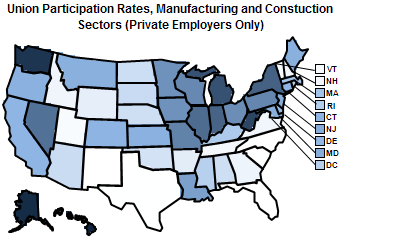 Arkansas is not the only state with a Democratic senator and low union membership. Pretty much the entirety of the South is in the same boat, with the important exception of Louisiana. But, while there aren’t many union members in Virginia, North Carolina or Florida — nor in some states like New Mexico outside of the South — Barack Obama is quite popular in all of those areas, which he is not in Arkansas. Arkansas and really Arkansas alone presents the unique combination of Obama being unpopular and the union movement being virtually nonexistent, and among the two Democratic senators in Arkansas, Lincoln is up for re-election in 2010, whereas Mark Pryor is not. It’s not a coincidence that she’s hemming and hawing on EFCA.

If Lincoln leaves the caucus on EFCA, the Democrats’ task becomes exponentially more difficult. Arlen Specter’s vote is probably safe. His circumstances are pretty much kitty-corner to Lincoln’s: Obama won comfortably in Pennsylvania, and unions are reasonably powerful there. Specter, moreover, has received as much support from unions as almost any Democrat, including many of their endorsements the last time he ran for election in 2004. If he bucked them on EFCA, however, Specter would become public enemy #1 to the unions, which could contribute to his defeat in 2010.

But if they lose Lincoln, then Specter only gets the Democrats to 59. Are there any other Republicans who might flip? Three others — Ohio’s George Voinovich, and Maine’s Susan Collins and Olympia Snowe — have received at least $100,000 in union contributions since 2003. Another wild card might be Alaska’s Lisa Murkowski; Alaska is a highly unionized state, and the unions have sometimes been supportive of her. If Sarah Palin decides to run against her in 2010, Murkowski will need substantial support from union members to have a chance of defending her seat. Still, all four voted against cloture when the bill came up in 2007, and if Obama’s coattails would ordinarily be worth something, that momentum is mitigated by the loss of face that the unions suffered on the auto bailout, when the UAW’s public relations effort when nightmarishly.

Most likely, then, the Democrats will need to hold both Lincoln and Specter, as well as win the seat in Minnesota. If any of these contingencies fall through, EFCA faces an uphill battle.