On Friday, the Bureau of Economic Analysis (BEA) released the first estimate of the US’ 4th quarter GDP. GDP increased at a 5.7% annual rate — a very brisk rate of expansion. Below is an in-depth look at the report from my blog.

Real gross domestic product — the output of goods and services produced by labor and property located in the United States — increased at an annual rate of 5.7 percent in the fourth quarter of 2009, (that is, from the third quarter to the fourth quarter), according to the “advance” estimate released by the Bureau of Economic Analysis. In the third quarter, real GDP increased 2.2 percent.

Let’s break the data down into small parts.

The increase in equipment and software is very welcome, as it indicates business is starting to restock it’s physical infrastructure. And an increase in residential investment is also a positive development.

The increase in exports plays into the “Asian economies leading the world out of the recession” theme (which is already happening). The inecrease in imports indicates the US demand is also increasing.

I expect a fair amount to be made about the effect of inventory building in the report. These account for almost 60% of the 5.7% growth rate. What you’re seeing here is a ridicules attempt at saying “some growth is bad and some growth is good.” The bottom line is inventory restocking is a legitimate economic activity that leads to growth. The argue otherwise is to let your prejudices color your analysis.

In addition, consider these charts from the St. Louis Federal Reserve: 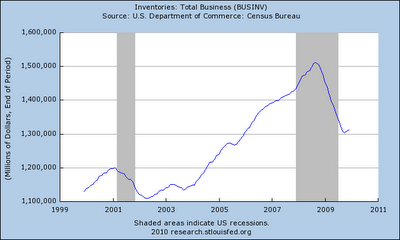 Overall, inventories are at incredibly low levels. In addition, 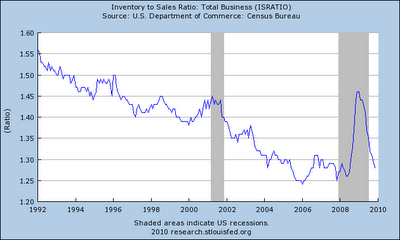 The inventory to sales ratio is also at a very low level. Combined, these two graphs tell us that an inventory build could continue for a few more quarters.

Let’s look at the various sub-parts of the report on a quarter to quarter basis. Lots of graphs follow. To get a bigger graph, right click and open in a new window.

Personal consumption expenditures — PCEs — account for about 70% of GDP growth. In addition, PCEs have three sub-parts — service expenditures (about 66% of PCEs), non-durables (about 22% of PCEs) and durable expenditures (about 12% of expenditures). Here are the charts that show the percentage increase from the preceding quarter in real PCEs and its components from the largest to the smallest. Click on all images for a larger image 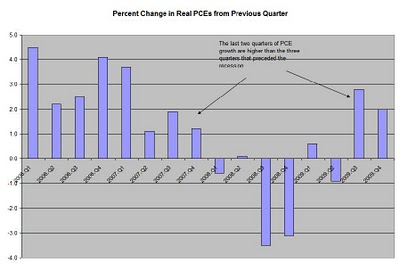 The percentage change from the preceding quarter in overall PCE growth is now larger than the three quarters that preceded the recession. 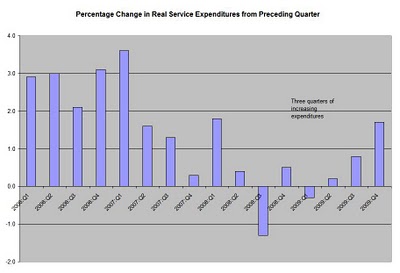 The pace of increase in service expenditures is increasing, as is 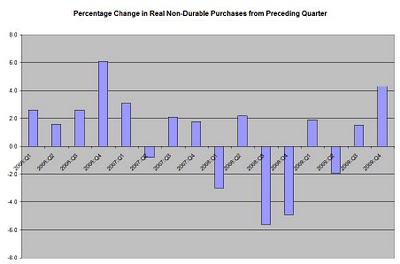 The pace of increase in non-durable PCEs. 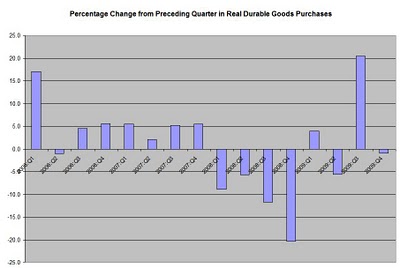 Durable goods purchases are languishing still. But, remember that these only account for 12% of overall PCEs.

Let’s continue by looking at the percentage change from the preceding quarter in real (inflation-adjusted) investment. Click on all images for a larger image 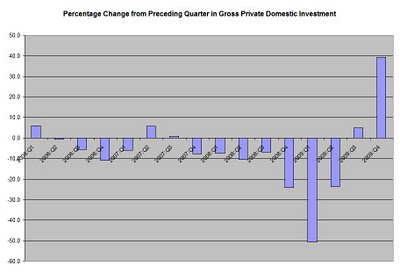 Total private investment increased smartly in the fourth quarter, although some of that increase is the result of a bungee like snapping back from a very low level. 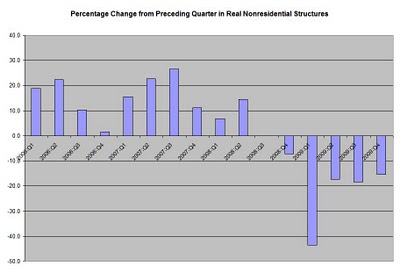 Non-residential structures are still contracting. Considering the overall condition of the commercial real estate market (which is still healing) this will continue for the foreseeable future. However, 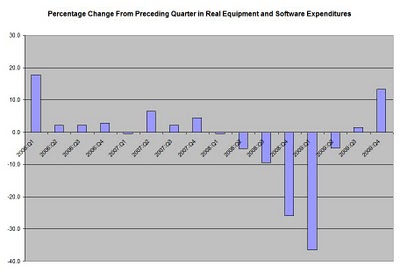 Software and equipment investment is also increasing. This indicates that businesses are starting to invest — which is a very healthy development. 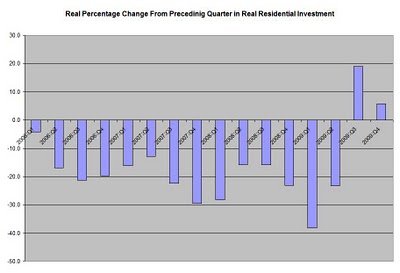 Finally, let’s take a look at exports and imports. Click on all images for a larger images. 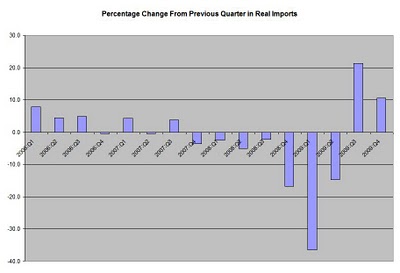 Imports are increasing on a quarter to quarter basis. 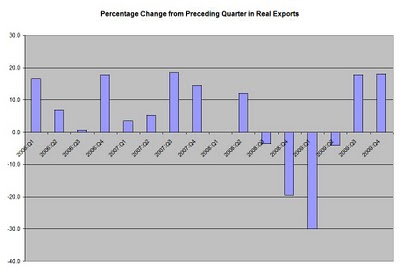 The good news is in both areas. The increase in imports means consumption is increasing and the increase in exports indicates that other countries are growing. However, the overall trend is negative because imports are still larger than exports.

Finally, let’s take a look at where the economy grew in the fourth quarter.

Overall this is a very encouraging report. Growth came from a variety of areas. While inventories accounted for the largest percentage of growth, the low level of inventories and the inventory to sales ratio indicates inventory growth could continue for some time. Consumption expenditures are increasing and investment in residential structures, equipment and software is increasing. Exports are ramping up as well.