This week, the president announced the creation of a panel to look at the federal budget. As such, it seems appropriate to look at the federal budget in detail to get a sense of what’s there. All of the information contained in the graphs that follow is available from the CBO. Please click on all images to see a larger image. Also, all data starts in 1970 and goes through fiscal 2009.

Let’s start with a chart of government revenues and expenditures, starting in 1970: 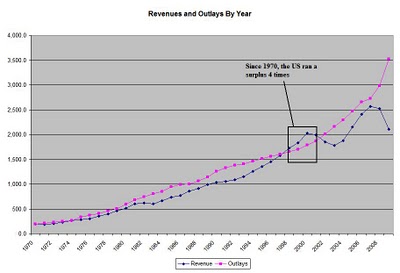 The US has run a surplus 4 years since 1970, or about 10% of the time. Over those 39 years we’ve had Republican and Democratic control of both the White House and Congress. This leads to a very simple conclusion: no party can make a legitimate claim to being fiscally responsible. 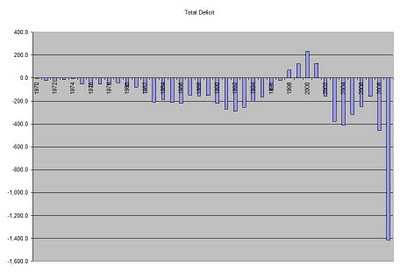 Above is a chart of the total deficit for each year going back to 1970. First, note (again) only four years show a surplus. This means that for 35 years (and in fact for a longer period) the US has issued debt on a continuing basis to pay for its revenue shortfall. This means the US — like most US corporations — has to manage its Treasury operations. All this means is the US Treasury has to decide what maturity of Treasury bond to issue, how much of a particular Treasury bond to issue and when to issue it. Again, this is standard procedure from a corporate finance perspective. 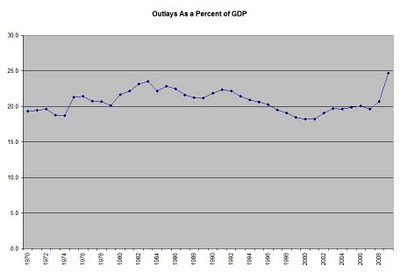 Above is a chart of total federal outlays as a percent of GDP. Notice the number has been remarkably constant since 1970, fluctuating right around 20% for most of that time.

Let’s take a look at the components of federal revenue. 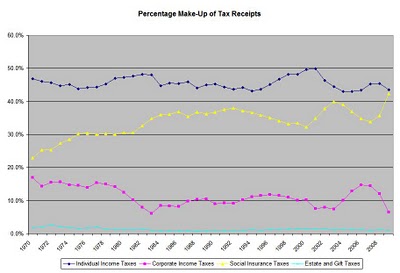 Personal income taxes (the top blue line) comprise the largest percentage of federal tax receipts. In addition, these have continually comprised about 45%-50% of total federal receipts. The biggest change since 1970 has occurred in social insurance taxes (the yellow line), which have increased from a little over 20% to about 35%-40% over the last 10 years. Corporate taxes (the light purple line) have also been consistently responsible for about 10% of total tax receipts. Finally, note that estate and gift taxes (the light blue line at the bottom of the graph) overall contribution is more or less negligible on a percentage basis. 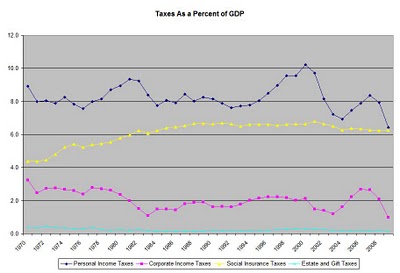 The above chart looks at federal receipts from a percent of GDP basis. Fist, note the percentages have been fairly consistent since 1970. Personal income taxes total between 8%-10% of GDP, corporate taxes total about 2% of GDP and estate and gift taxes account for less than 1% of GDP. The only big change has been an increase in social insurance taxes, which have increased to about 6% of GDP. 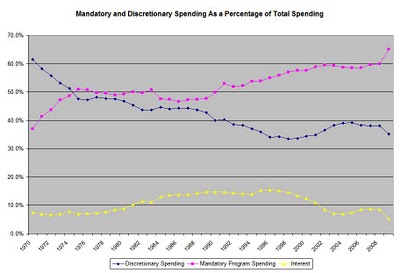 The above chart breaks federal spending down into mandatory, discretionary and interest payments. Mandatory spending has increased from a little under 40% of the federal budget in 1970 to right around 60% over the last few years. Discretionary spending has decreased from right around 60% in 1970 to a little under 40% over the last few years. The progression of mandatory spending is at the center of much of the budgetary concern in Washington and the public.

Finally, note that interest payments are in fact pretty much under control. The primary reason for this is the near 20 year downward trajectory in interest rates: 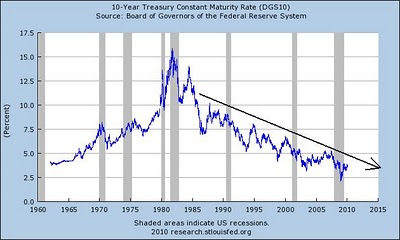 Above is a chart of the 10-year CMT (constantly maturing treasury). Interest rates have been dropping for about 20 years. While there is considerable debate regarding the possibility of this continuing, we’ll have to wait and see how that plays out. 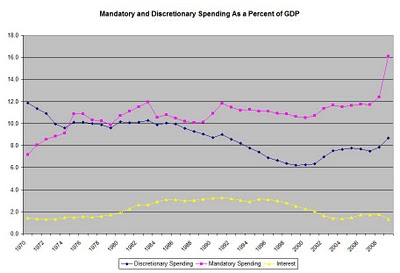 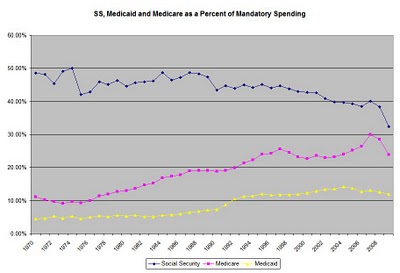 So, what does all of this tell us about the US budget?

1.) The total federal debt/GDP ratio and interest rate payments (both on a percent to total expenditures and percent of GDP) are manageable at current levels. All of this has been aided by a two decade long decrease in interest rates. It’s doubtful that will continue given the current pace of expenditures. Most importantly, given the current rate of spending and debt growth, changes will have to be made once we are out of the recession for sure. And that’s where the real political problem lies.

2.) While mandatory spending has remained constant as a percent of GDP, it’s increase to about 60% of the current federal budget is perhaps the biggest problem the US faces going forward. And as the percentage increase in medicare payments indicates, medical payments are a primary reason for the problems the country faces at the federal fiscal level.

4.) I’m surprised how unimportant estate and gift taxes are to the overall scheme of things. Even before the generous estate tax credit of the last few years (essentially exempting estates worth less than $3.5 million), estate and gift taxes are remarkably unimportant from a total revenues perspective. It’s obvious they serve another purpose such as the theoretical prevention of dynastic wealth transfer.