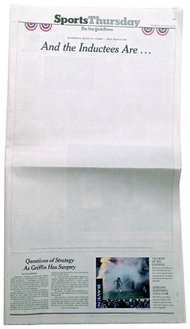 Jessie Schwartz for The New York Times Baseball writers elected no one to the Hall of Fame on Wednesday, despite what might have been the deepest ballot in years.

The failure of the writers to pick Barry Bonds or Roger Clemens was not a surprise given the low vote totals received in the past by Mark McGwire and Rafael Palmeiro, other players associated with the use performance-enhancing drugs. But the vote totals for Bonds and Clemens, just 36 and 38 percent, were lower than expected.

Perhaps the clearest effect of the crowded ballot, however, was realized among candidates who were returning to the ballot from last year. Of the 13 players who carried over from the 2012 ballot, nine received a lower share of the vote, including Lee Smith, Alan Trammell, Fred McGriff, Don Mattingly and Bernie Williams.

This is atypical; instead, players usually add votes with each additional year they spend on the ballot. Since 1967, when the Hall of Fame adopted balloting rules similar to the ones it uses now, about two-thirds of holdover players gained ground from their prior year’s vote percentage.

It is possible to be a bit more precise about this pattern. Based on an analysis of Hall of Fame voting between 1967 and 2011, I found that the increase in a player’s vote total is typically proportional to his percentage from the previous year. In his second year on the ballot, for example, the typical player’s vote share increases by a multiple of about 1.1.

The pace of improvement is typically highest in the first several years that a player spends on the ballot, slowing down once he has been eligible five or six times. (The exception is in a player’s 15 and final year of eligibility, when he may receive a fairly large boost.) But these small percentage gains can add up, something like the way in which interest compounds over time. For example, as shown in the chart below, a player who gets just 30 percent of the vote in his first year on the ballot would be projected to make it in on his 14th year of eligibility if he follows the formula each year.

In practice, the growth in a player’s vote share is rarely this smooth — and you should not necessarily expect the pattern to hold for Bonds and Clemens. (Instructively, the vote shares for McGwire and Palmeiro have actually been declining.) Nonetheless, Hall of Fame candidates typically have a tailwind as time passes. 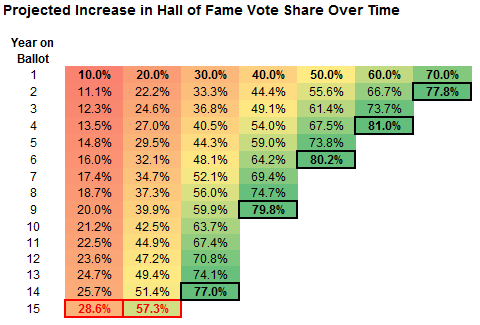 This year, however, veterans on the Hall of Fame ballot faced a headwind instead. The next chart compares the actual vote that each player received against that projected by the historical formula. 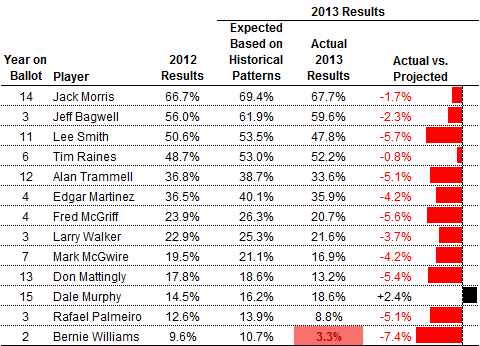 Actual results in 2013 compared to projections based on historical patterns.

Twelve of the 13 players underperformed their projection; the exception was Dale Murphy, who got a larger-than-average boost in his final year of eligibility, but still came nowhere close to winning election.

Even some players who gained ground did not necessarily help their chances. Jack Morris went from 66.7 percent of the vote to 67.7 percent, below his projection of 69.4 percent. The small difference could be important because next year will be Morris’s final year of eligibility, and he projects to be very close to the 75 percent threshold for election. (Perhaps the player who had the best year, instead, was Tim Raines, whose vote share grew to 52.2 percent from 48.7 percent, and who is now a clear favorite to be elected someday by the writers.)

Most other players lost ground outright. Trammell, in his 12th year of eligibility, declined to 33.6 percent from 36.8 percent of the vote. He was an underdog to make it in before, but now he seems to have very little chance. The same also holds for Smith, who lost most of what he gained last year after years of stagnant vote totals.

McGriff, as Joe Posnanski writes, seemed to be a plausible candidate to gain ground this year as writers sought out players who were perceived as clean, as opposed to known or suspected of steroid use. Instead, his vote share declined to 20.7 percent from 23.9 percent. Williams had received just under 10 percent of the vote in his first year of eligibility, but his case was not entirely hopeless; players like Bob Lemon and Carl Hubbell were eventually selected by the writers with a similar vote total in their first year.

Instead, Williams fell below the 5 percent threshold required for a player to stay on the ballot.

The crowded and confusing ballot may be affecting these players in several ways. The most obvious is that the writers are limited to voting for a maximum of 10 players. This year, according to the sample of ballots collected by the Twitter user @leokitty, 24 percent of writers used all 10 of their picks. That compares with 12 percent in 2011, and just 4 percent in 2012.

Did the 10-vote limit keep Biggio and Morris out of the Hall of Fame, perhaps along with other players?

Actually, it was almost certainly not responsible all by itself. Of the 24 percent of writers who used all 10 ballot slots, 90 percent did name Biggio, meaning 10 percent did not. At best, therefore, if all writers who exhausted their ballots would also have named Biggio if they had unlimited votes, he would have gotten only 10 percent of the 24 percent, adding only 2.4 percentage points to his overall vote total.

The logic here is that it’s hard to make a case that Biggio was only the 11th or 12th best player on the ballot. Instead, most of the writers who left him out were probably more like Jon Heyman of CBS Sports. Heyman wrote that he saw Biggio as the eighth best player on the ballot — but he also thought that only six were worthy of inclusion. Most of the writers who left Biggio out, in other words, were those who take a conservative overall approach to how many players they want in the Hall of Fame, and not those who ran out of ballot p
ositions.

Morris is a more debatable case. If all writers who maxed out their ballot slots had included him, he would have come very close to 75 percent of the vote. However, Morris is also a highly polarizing candidate. Those writers who included him often thought he was among the very best players on the ballot; on several ballots, in fact, Morris was the only player named. But other writers think he falls fall short of Hall of Fame standards and would not have picked him no matter how many votes they had to spare. 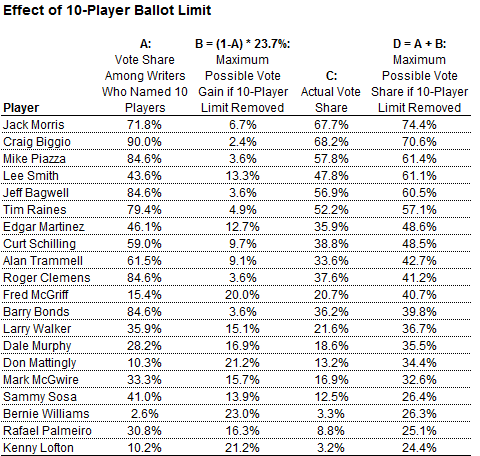 Nor, obviously, were Bonds’s and Clemens’s totals affected to any material degree by the 10-player limit. Nobody left Bonds off their ballots because they thought he had only the 11th-best statistical record; they did so because they don’t think steroids users should be in the Hall of Fame. (In fact, most of the writers who maxed out their ballot slots included Bonds and Clemens; the writers who are willing to consider performance-enhancing drug users have much more crowded ballots than those who are not.)

Instead, players like McGriff, Trammell, Williams and Edgar Martinez were probably most affected by the 10-player limit. The logic for McGriff, for example, is very close of the opposite of that which might be applied to Biggio. It’s fairly hard to sustain a case that McGriff was one of the best six or seven players on the ballot this year. But you might credibly argue that there is a glut of a dozen or so qualified players, McGriff among them, and you had to leave McGriff out because of the ballot limit.

However, the players are not only being affected by those writers who ran out of ballot slots. There were a higher-than-average number of writers this year who listed very few players, or even none at all. Some 10 percent of voters named two or fewer players this year, according to Leokitty’s spreadsheet. That is lower than in 2012, an underwhelming year on the ballot, when 16 percent of voters did so.

But it is less than 2009, 2010 or 2011, when between 3 and 8 percent of writers listed so few players. Some writers are deliberately listing very few players as a protest vote, whether against the steroids era or the Hall of Fame balloting process.

Finally, some players may be harmed by the psychology of the ballot. If Clemens were not on the ballot, for example, then you could credibly make a case that Curt Schilling was the best pitcher on the ballot (if you don’t think that Morris is). But Schilling’s accomplishments look poor by comparison to Clemens’s, as do those of almost any pitcher — even if you aren’t willing to vote for Clemens because of his steroids use. The same holds for outfielders whose statistics might be compared with Barry Bonds’s.

There is even something to be said for the so-called “paradox of choice”: that when presented with too many options, we may be overwhelmed with information and have trouble making any decisions at all.

Hall of Fame voting is ultimately designed to be a consensus process. One reason that players tend to gain votes over time is because the writers are looking at what their peers are doing and value the endorsements of their colleagues. Moreover, because they have as many as 15 chances to elect a player, many writers tend toward conservatism initially. There is no way to remove a player from the Hall of Fame once he has been elected, but you can change your mind to include him later. When a writer initially votes “no” on a player, it really means “wait and see” in many cases.

But consensus is harder to achieve when members of a group have divergent values and ideologies. Instead of the typical friendly arguments about how a player’s lifetime accomplishments might be weighed against how dominant he was in his best seasons, or how to compare players at different positions, the writers are now spending most of their time arguing about who used steroids and when, and how this should affect Hall of Fame consideration. Many have passionate beliefs about this, whichever side of the argument they take. An increasing number of writers would like to elect a dozen or more players; an increasing number would like to lose the whole “steroids era” to history. Good-natured debates may be replaced by tactical considerations, as voters make guesses about who everyone else might vote for, or where their ballots might be wasted.

Next year will place even more pressure on the voters, when Greg Maddux, Tom Glavine, Frank Thomas and Mike Mussina are added to the list of candidates. Those who apply little discount for steroids use may credibly claim to identify 15 or more qualified candidates, and even those who do not may have to drop one or two names that they otherwise see as worthy. The New York Times will probably not have to publish a blank page again, but no one but Maddux seems sure to make it in.