We continue our Presidential Geography series, a one-by-one examination of the peculiarities that drive the politics in all 50 states and the District of Columbia. Here is a look at Connecticut, the Constitution State. FiveThirtyEight spoke with Paul Bass, the editor of The New Haven Independent; Gary Rose, an associate professor of political science at Sacred Heart University; Ronald Schurin, an associate professor of political science at the University of Connecticut; and Kevin F. Rennie, a columnist for The Hartford Courant and a former Republican state senator and representative. 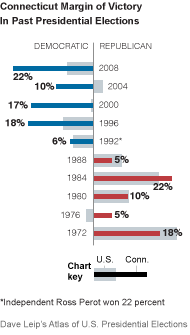 Connecticut is in the top-tier of safely Democratic states. Every statewide elective office is held by Democrats, as is the State Senate and State House. Democratic presidential candidates have won Connecticut in every election since 1992, and often by wide margins. President Obama carried the state by 22 percentage points in 2008.

But the most recent poll conducted in Connecticut — in late August by Quinnipiac University — found a surprising result: Mr. Obama led Mitt Romney by just 7 percentage points, 52 percent to 45 percent.

Mr. Obama’s lead in that poll, while on the low end of what pollsters have found in Connecticut this year, was not an outlier. FiveThirtyEight’s current polling average in the state has Mr. Obama up by 9.4 percentage points.

The current evidence suggests that, while far from a battleground state, Connecticut has soured on Mr. Obama to a greater extent than the nation as a whole since 2008. Mr. Obama’s disproportionate decline there may prove exaggerated, or even completely illusory, but there are reasons to believe it is real.

First, the Connecticut economy has been struggling for a long time. Second, Connecticut has a unique bloc of affluent, Wall Street-connected voters with whom Mr. Romney may hold special appeal. And third, the state’s race for the United States Senate has become competitive. 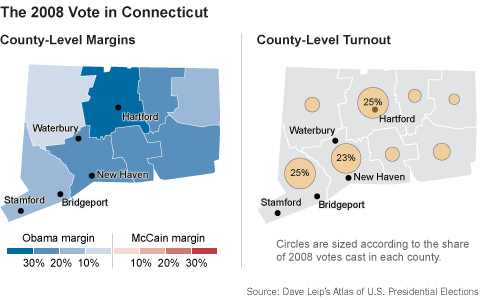 Like elsewhere in the Northeast, Connecticut was a swing state in presidential elections through most of the 20th century. Its blue-collar and heavily Roman Catholic cities and suburbs voted Democratic. Republicans won support from the suburbs that were wealthy and mostly Protestant and from the predominantly Protestant rural areas that were less well-off. Those voting patterns have largely reversed themselves, Mr. Schurin said.

Connecticut Republicans were defined by their moderation, best exemplified by middle-of-road governors like John G. Rowland and Jodi Rell and a Republican-turned-independent, Lowell P. Weicker, Jr. Gov. Dannel P. Malloy, who took office in 2011, was the state’s first Democratic governor in 20 years.

The trend has been especially evident in southwest Connecticut. Fairfield County, one of the wealthiest in the nation, is dotted by Wall Street bedroom communities, like Stamford and Greenwich, where affluent voters work for hedge funds, private equity shops and banks. These wealthy suburban communities, once a bastion of Republican support, have been trending Democratic, Mr. Bass said. Mr. Obama carried Fairfield County in 2008 by 18 percentage points.

But if Fairfield County has seen the most Democratic gains over the last two decades, it may also be where Mr. Romney might be able to make up the most ground. Many Wall Street executives appear to have lost their fondness for Mr. Obama, and Mr. Romney — who co-founded the financial services firm Bain Capital — may be well positioned to win their votes.

“There’s a lot of people in Fairfield County like Romney,” Mr. Rose said. “They even look like Romney.”

It is possible that Mr. Romney could carry Fairfield County this year, Mr. Rose said. That would be enough to put a substantial dent in Mr. Obama’s margin — a quarter of votes in 2008 were cast in Fairfield — but it would not be enough to put the state in play. There simply are not enough Republican-leaning voters in the rest of the state.

Of Connecticut’s eight counties, Litchfield is the most Republican. It has pockets of Fairfield-like wealth and includes parts of the blue-collar and Republican-leaning Naugatuck River Valley. But after Litchfield, the pickings are slim for Republican candidates. 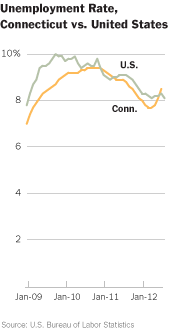 Eastern Connecticut is more sparsely populated but still leans Democratic. The rural northeast, known as the Quiet Corner, is a little more politically competitive than the southeast, where the defense industry is prominent.

New Haven County has matched the statewide vote in the last two presidential elections. The city of New Haven, home to Yale University, and Waterbury, which also leans Democratic, account for most of the votes cast, but the county also includes more rural and Republican-leaning parts of the Naugatuck Valley.

The New Haven area, historically a manufacturing center, has recently found new economic life in the biomedical and technology fields. But like the state as a whole, New Haven County has pockets of extreme poverty and extreme wealth.

Mr. Obama is a 99 percent favorite in Connecticut, according to the current FiveThirtyEight forecast. While the presidential race has not received much attention in Connecticut, it may affect — or be affected by — the state’s Senate race, which has become unexpectedly interesting.

Conversely, Ms. McMahon’s money  has led to a mostly one-sided advertisement war, which may be another reason that Mr. Romney is staying relatively close in the Connecticut polls. The state’s unemployment rate recently moved above the national average, and Ms. McMahon has saturated the state with ads highlighting the state’s struggling economy. That may be indirectly hurting Mr. Obama, Mr. Rose said.

Still, Mr. Romney has little chance of winning Connecticut’s seven electoral votes. The best he can probably hope for is carrying Fairfield County and keeping Mr. Obama’s statewide margin of victory in the low double digits or high single digits.