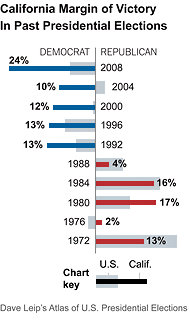 President Obama was in California on Monday, but not to campaign. The Golden State is safely Democratic, and Mr. Obama’s trip was packed with high-dollar fund-raisers. But the fact that California isn’t a battleground state doesn’t mean it isn’t of electoral importance.

With more than 37 million residents, California’s population is about 66 times that of Wyoming, which has the smallest population of any state in the union. Roughly one in eight Americans live in California, and the state has a proportional impact on presidential politics.

From 1968 to 1988, California was the linchpin in the Republican “lock” on the White House. Republicans held the presidency for 16 of those 20 years, and more California Republicans occupied the oval office (Ronald Reagan and Richard Nixon) than Democrats from any state. California clearly wasn’t the sole reason for the G.O.P.’s success, but it was a big part of it.

With California having 55 electoral voters, 17 more than second-place Texas, its transformation from a red to blue state in 1992 upended the electoral math. Beginning in 1992, Democrats have won three of five presidential elections, they haven’t lost the electoral college by more than 35 votes, and they have lost the national popular vote just once. 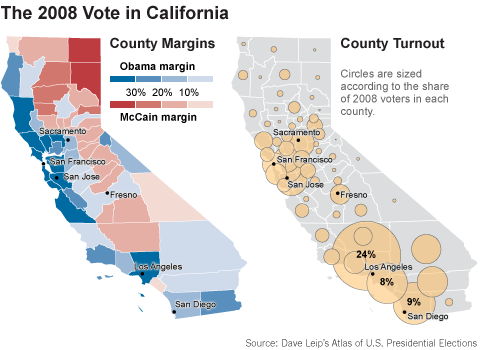 The political landscape in California used to be divided between north and south. The north was Democratic-leaning, and Southern California was Republican-leaning, largely because the defense industry was a major economic engine there, Mr. Kousser said. At one point California accounted for almost a quarter of the nation’s defense industry, Mr. Gerston said, and Republicans were seen as better friends of the Pentagon budget.

Then the Cold War ended. In the early 1990s, defense spending began to fall, and numerous military bases in California were closed. This helped spark an out-migration of mostly white, affluent and Republican-leaning residents, including many former defense-industry workers.

While the out-migration of Republican-leaning voters helped push California to the left, the influx into California of Hispanics and Asians had an even larger effect. Between 1980 and 2000, California’s Hispanic and Asian communities each doubled as a share of the state’s population: Hispanics from 16 to 32 percent, and Asians from 5 to 11 percent. California became a majority minority state after the 2000 census, and today non-Hispanic whites are less than 40 percent of the state’s population (although they still constitute the majority of voters).

The demographic migrations have turned the state’s political axis by 90 degrees. The Democratic share of the California vote has climbed in every presidential election since 1992 as every region in the state except the interior became more Democratic.

If you’re in California and can see the Pacific Ocean, you’re almost sure to be surrounded by Democrats. The Bay Area and Los Angeles County, which is almost 50 percent Hispanic, provide millions of Democratic votes.

“You move into the Bay Area and basically you need a visa to get in there as a Republican,” Mr. Cain said. 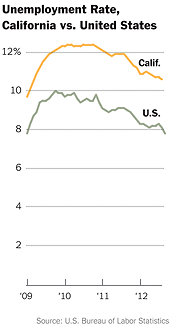 There are still a few parcels of Republican-leaning beachfront property, but these aren’t as red as they used to be. South of Los Angeles and north of San Diego, affluent Orange County was historically a Republican stronghold. Over the last dozen years, however, the Hispanic population in Orange County has risen and Democrats have made inroads. Senator John McCain carried Orange County by only four percentage points in 2008.

San Diego, too, was reliably Republican, and it is still more right-leaning than California’s other major cities partly because it has retained a substantial military presence.

Mr. Obama is a 100 percent favorite to carry the state, according to the current FiveThirtyEight forecast. California is controlled top to bottom by Democrats. But despite its reputation as a liberal wonderland, California has a strong antitax streak (accompanied by a weaker antispending streak). With the state in severe fiscal trouble and a two-thirds legislative majority required for any tax increase, Democratic California has instituted large spending cuts.

With Democrats in control and the state struggling so badly — the state’s unemployment rate remains above 10 percent — one might expect California Republicans to be making a comeback. But the opposite is true: the state’s G.O.P. appears stuck in a downward spiral.

And it is in this regard where California might again provide a glimpse of the future: the challenge for California Republicans, to win over the growing numbers of minority voters, is the same challenge the party faces nationally.

The G.O.P. does have some openings. “Latinos are conservative when it comes to abortion,” Mr. Kousser said. And California Republicans have had some success in recruiting Hispanic candidates, Mr. Cain said.

But, Mr. Cain added, “Republicans really have to come to grips with the growth of Latino voters.”